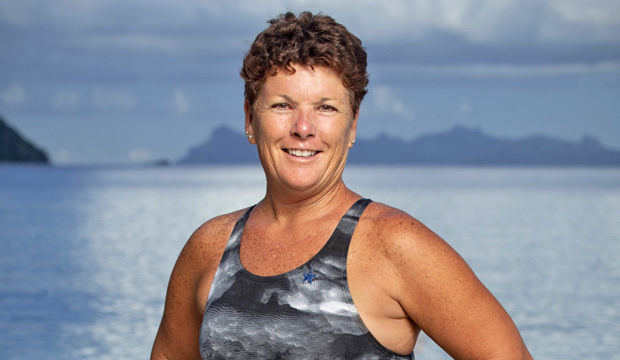 On “Survivor: Island of the Idols,” Boston Rob Mariano and Sandra Diaz-Twine — both considered among the best players of all time — have been sizing up the castaways as, one by one, they wash up on their beach in order to be mentored by the former champs.

On episode 7, they finally got a student who actually impressed the heck out of them in the form of Janet Carbin, a 59-year-old chief lifeguard from Palm Bay, Florida. Since the beginning, Janet avoided making the mistake of trying to mother the younger players like Reem Daly, 46, did on last season’s “Extinction Island.”  Instead, she was congenial and accepting of her fellow players in their 20s and 30s.

Probably Janet’s biggest rival is the upbeat Elaine Stott, a 41-year-old factory worker who controlled the previous tribal council after getting instructions from Rob and Sandra about how to find a block-the-vote advantage during the immunity challenge. Her strategy behind the use of the block led to Jason Linden being voted out instead of herself.

SEE‘Survivor 39’: Odds favor handsy Dan Spilo to be the next player to be voted out

While Sandra seemed favorably disposed towards Elaine, the Queen was absolutely enthralled by Janet’s decision to turn down her and Rob’s offer to try for a chance to walk away from a tribal council. She thought about the fact that her action not only wouldn’t allow her to vote with her alliance, but also that it would put a target on her back. Probably her coolest move was when she flashed her breasts while returning on a boat to show the others on her tribe that there was no idol upon her person.

Sandra told Rob that Janet is “a logical player — she has wisdom, she has age” before adding “we need an older winner.” Considering that only one woman over 40 has ever won “Survivor,” Denise Stapley of “Survivor: Philippines” that aired in 2012, it’s about time a mature player took it all. Take the poll below about Janet’s chances to become the Sole Survivor and leave comments about her chances.