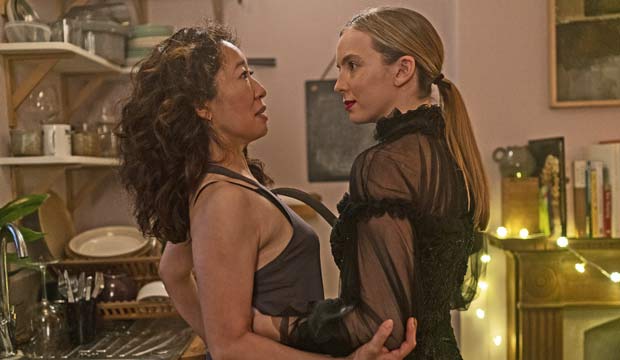 Sandra Oh (“Killing Eve”) lost her 2018 Best Drama Actress Emmy nomination to Claire Foy (“The Crown”), but with Foy out of the running at this year’s awards — as well as every other 2018 nominee in the category — Oh has dominated our Emmy predictions for 2019. Is she one of the year’s biggest locks? It’s dangerous to call anyone a lock at these kudos, which are rife with surprises, and Oh might especially need to watch out for her own murderous co-star, Jodie Comer.

Thousands of Gold Derby readers are already making their Emmy predictions here in our predictions center, where Oh has unanimous support from the 15 Expert journalists we’ve polled from top media outlets. She’s also the overwhelming favorite of Gold Derby’s Editors, our Top 24 Users who got the highest scores predicting last year’s nominations and our All-Star Top 24 who got the highest scores when you combine the last two years’ forecasts.

And it’s no wonder why. Not only is Oh the only returning contender from last year’s Emmy lineup, she also swept the Golden Globe, Critics’ Choice and SAG Awards this past winter for her performance as Eve Polastri, an obsessed MI5 agent hunting down an assassin (Comer). And counting her previous role as Cristina Yang on “Grey’s Anatomy,” she has been nominated for six Emmys without a win, which makes her well overdue. It would also be historic because no Asian actress has ever won Best Drama Actress.

But a couple of dissenting users disagree with that consensus. Our Editor Paul Sheehan thinks Comer will upset her co-star as the volatile Villanelle. So does one of our All-Stars. Comer was snubbed at the Emmys last year, but she just beat Oh for Best Actress at the BAFTA TV Awards, where the English actress had the home field advantage against the Canadian Oh. That might give her momentum going into Emmy season. Comer also has arguably the showier role, adopting an Eastern European accent to play the extravagant winking devil of a villain.

But might the two actresses split the vote instead? Under the former voting system, academy members would rank the nominees in order of preference, so having multiple nominees from the same show was often more an advantage than a liability. But now the Emmys are decided by a simple plurality vote where academy members just pick one actor as their winner, so fans of “Killing Eve” will have to pick one or the other. That could divide their support and open the door for another surprise winner.

But vote-splitting isn’t always a problem. Since this new system has been enacted, Sterling K. Brown won Best Drama Actor for “This is Us” against his co-star Milo Ventimiglia (2017). That same year Riz Ahmed won Best Movie/Mini Actor for “The Night Of” against his co-star John Turturro. And in 2018 Peter Dinklage won Best Drama Supporting Actor against his “Game of Thrones” co-star Nikolaj Coster-Waldau. So “Eve” could make a “Killing” even if both women are nominated. It might just be a matter of which woman will be left standing.