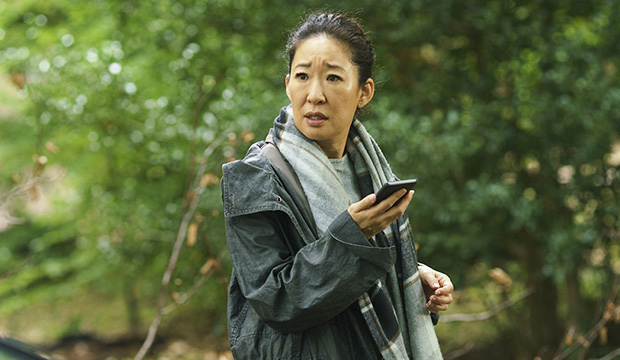 “This is fantastic!” screamed Sandra Oh on Sunday night after winning the 2019 Critics’ Choice Award for BBC America’s “Killing Eve.” Oh had been locked in a tight race with Julia Roberts (“Homecoming”) for Best Drama Actress, but she managed to pull out a victory just one week after winning the Golden Globe. The Critics’ Choice Awards are presented annually by the Broadcast Television Journalists Association. See the complete list of winners.

Oh spent much of her acceptance speech thanking co-star (and co-nominee) Jodie Comer, whom she forgot to thank at the Golden Globes podium. “There’s one person who is my obsession, my other half, the person who has pushed me to the limit,” Oh raved about Comer. “When it’s just the two of us on set, the entire world goes away. I’m so appreciative of your trust and your talent. It’s been one of the great privileges of my life to be on ‘Killing Eve’ and so thank you very, very much.”

Besides Oh, Comer and Roberts, the other four leading ladies nominated for Best Drama Actress were Maggie Gyllenhaal (“The Deuce”), Elisabeth Moss (“The Handmaid’s Tale”), Elizabeth Olsen (“Sorry For Your Loss”) and Keri Russell (“The Americans”). Gold Derby’s racetrack odds favored Oh to win with leading 6/1 odds, just ahead of Roberts at 7/1 odds.

Before she won a Critics’ Choice Award and a Golden Globe for “Killing Eve,” Oh found great success starring in “Grey’s Anatomy.” For her role as Dr. Cristina Yang in that ABC medical drama, she prevailed at the SAG Awards and Golden Globes.