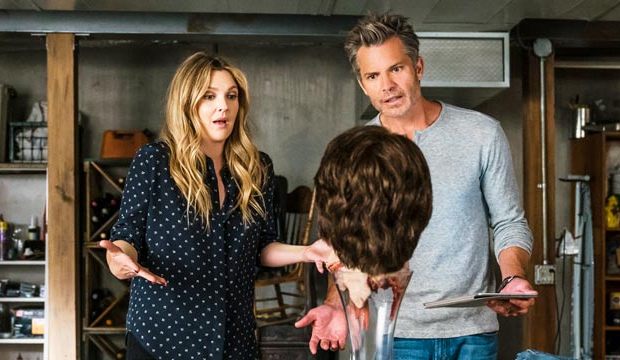 “Santa Clarita Diet” fans are in an uproar over Netflix’s decision to cancel their zombie-mom series on Friday. The Drew Barrymore–Timothy Olyphant single-camera comedy ended its third season on a huge cliffhanger, with — SPOILER ALERT — Joel apparently becoming undead after Sheila bit him to prevent his being possessed by her zombie spider, aka Mr. Ball Legs. Now fans are worried that they’ll never learn any answers to the show’s biggest mysteries — that is, unless Netflix decides to greenlight a wrap-up “Santa Clarita Diet” TV movie.

There is precedent for this, of course. Two years ago after the streaming service canceled “Sense8,” fans threw such a fit that a TV movie was produced one year later to give them a sense of closure. “Sense8: Together Until the End” wound up being such a success that it was even nominated as Best Television Movie at the 2019 Producers Guild Awards. “Santa Clarita Diet” has yet to enter the awards discussion, though it was honored with a 2019 Writers Guild nomination for the episode “Halibut.”

Netflix had no explanation for ending “Santa Clarita Diet,” though we’re assuming it’s because there simply weren’t enough viewers to justify the hefty production cost. Here is Netflix’s statement in full: “The world had never known a ‘zom-com’ until Santa Clarita Diet, and we’re indebted to creator Victor Fresco for bringing this idea to Netflix. To their endless credit, the incredible Drew Barrymore and Timothy Olyphant were totally game, with an uncanny knack for comedy that brought Sheila and Joel Hammond to vibrant life, even though one of them was undead. We’re grateful to Victor, Drew, and Timothy, along with fellow executive producers Tracy Katsky, Aaron Kaplan, Chris Miller and Ember Truesdell and the terrific cast, including Liv Hewson and Skyler Gisondo, and crew for three hilarious seasons for Netflix members to discover for years to come.”

SEENetflix schedule: Here’s what is coming and leaving in April 2019

If lightning strikes and “Santa Clarita Diet” is honored with a proper series finale, some of the questions that fans most want answered are how Sheila’s virus was originally created, whether Joel is really dead, if their daughter Abby (Liv Hewson) and next-door neighbor Eric (Skyler Gisondo) will ever get together, and WTF happened to Anne (Natalie Morales), the sheriff’s deputy who discovered the Hammonds’ secret.

“Santa Clarita Diet” isn’t the only series to receive Netflix’s axe this year, as the streaming giant also canceled “One Day at a Time,” “Friends From College,” “The Punisher,” “Marvel’s Jessica Jones” and “Travelers.” Of this group, “One Day’s” cancellation had fans most up in arms as they reacted with outrage on social media.