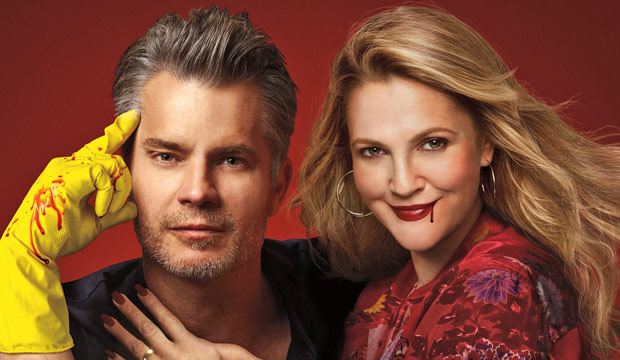 “Santa Clarita Diet” fans are not happy that their favorite mom-zom-com has been canceled by Netflix. In our recent poll a whopping 94% of readers voted that they “need to know what happens next” in wake of last season’s deadly cliffhanger in which Sheila (Drew Barrymore) bit Joel (Timothy Olyphant) to prevent his being possessed by her zombie spider, aka Mr. Ball Legs. To compare, only 6% voted that the show should simply “rest in peace” following its cancellation. Do you agree or disagree with those poll results? Sound off below in the comments section.

“We’re indebted to creator Victor Fresco for bringing this idea to Netflix,” the streaming site said in a statement. “To their endless credit, the incredible Drew Barrymore and Timothy Olyphant were totally game, with an uncanny knack for comedy that brought Sheila and Joel Hammond to vibrant life, even though one of them was undead. We’re grateful to Victor, Drew, and Timothy, along with fellow executive producers Tracy Katsky, Aaron Kaplan, Chris Miller and Ember Truesdell and the terrific cast, including Liv Hewson and Skyler Gisondo, and crew for three hilarious seasons for Netflix members to discover for years to come.”

Fans are understandably confused because no reason was given for the show’s cancellation, though we’re guessing it’s because it didn’t catch on with the masses like some of their other programs. It also doesn’t help that “Santa Clarita Diet” was ignored at major awards shows, including the Emmys, Golden Globes and Critics’ Choice, despite top-level talent like Barrymore and Olymphant. Its one major nomination came earlier this year at the Writers Guild Awards for Fresco’s episode “Halibut.”

There is reason to be hopeful about a potential “Santa Clarita Diet” wrap-up movie, since Netflix produced a “Sense8” telefilm two years after it canceled that world-traveling series. “Sense8: Together Until the End” wound up being such a success that it was even nominated as Best Television Movie at the 2019 Producers Guild Awards.

A “Save Santa Clarita Diet” petition was created at Change.org following the show’s cancellation, with nearly 13,000 fans signing on. Will all of this viewer outreach be enough to actually bring the show back from the dead, or will fans forever be wondering about the fates of Sheila, Joel, Abby (Liv Hewson) and Eric (Skyler Gisondo)?