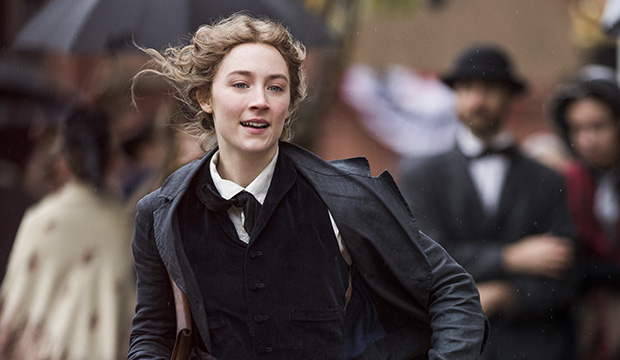 If Saoirse Ronan makes the Best Actress Oscar cut for “Little Women,” there’s a 99.9 percent chance she’ll be the youngest nominee of the group at the age of 25. But in terms of Oscar resumes, she’d be an ol’ veteran. Ronan would be on her fourth career bid, which would make her the second youngest performer, male or female, to amass four nominations.

The record is currently held by Jennifer Lawrence, who snatched it from Jennifer Jones. Jones, who won Best Actress on her 25th birthday for “The Song of Bernadette” (1943), was 27, a couple weeks shy of her 28th birthday, at the time of her fourth consecutive nomination, for Best Actress for “Duel in the Sun” (1946). Lawrence was 25 when she received her fourth nomination, for Best Actress for “Joy” (2015), but the tiebreaker is their birthdays — Lawrence was born Aug. 15, 1990, and Ronan on April 12, 1994 — so Lawrence was about four months younger than Ronan will be at the time of nominations in January.

JLaw is the age-record gatekeeper for Ronan. As you may recall, when Lawrence was up for “Joy,” one of her rivals was none other than Ronan, who was 21 at the time of her second career bid, for “Brooklyn” (2015). (And no, Ronan is not the fastest to two nominations; that is held by Angela Lansbury, who was a two-time nominee by 20.)

Two years later, Ronan bagged her third nomination, for Best Actress for “Lady Bird” (2017), at the ripe old age of 23, but that also wasn’t enough to eclipse Lawrence’s record of youngest three-time nominee. She received three by 23 as well, with her Best Supporting Actress bid for “American Hustle” (2013), but, again, her August birthday gives her the “youngest” title. (While we’re on the age of 23, Winona Ryder, the last actress to portray Jo March on the big screen, was that age when she was shortlisted for Best Actress for the 1994 version of “Little Women.”)

The good news for Ronan is that if she does make the Best Actress lineup, she’d be on even ground with Lawrence after this season since Lawrence, the second youngest Best Actress champ (“Silver Linings Playbook,” 2012), has yet to receive a fifth nomination. Kate Winslet holds the record as the youngest to accrue five and six nominations; she was 31 at time of her Best Actress bid for “Little Children” (2006) and 33 when she was nominated for and won Best Actress for “The Reader” (2008).

Ronan, who’s received glowing praise for her spin on Jo March in “Little Women,” is currently in third place in our Best Actress odds, trailing Renee Zellweger (“Judy”) and Scarlett Johansson (“Marriage Story”). Charlize Theron (“Bombshell”) and Awkwafina (“The Farewell”) are in fourth and fifth, respectively. And to further put Ronan’s incredible Oscar run in perspective, Zellweger, 50, would also be on her fourth nomination. Theron, 44, would be on her third. Johansson, who turns 35 on Nov. 22, and Awkwafina, 31, are seeking their maiden bids.