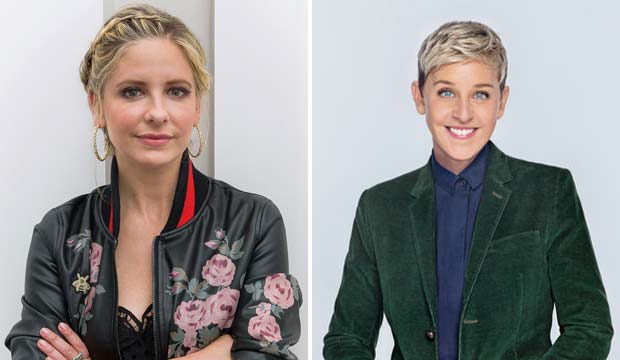 I cannot tell a ‘Lie.’ I’m looking forward to seeing Sarah Michelle Gellar back on TV. Our sister site Deadline has exclusively reported that the erstwhile “Buffy the Vampire Slayer” is returning to the small screen the same way a lot of stars have been coming to TV: in a new limited series adapted from a bestselling novel. She’s set to star in and executive produce “Sometimes I Lie.”

The series will be scripted by Oscar nominee Robin Swicord (“The Curious Case of Benjamin Button”) based on the novel by Alice Feeney about a woman who wakes up incapacitated in the hospital with no memory of how she got there, but suspecting that her husband was involved somehow. It’s being developed by Ellen DeGeneres‘s company A Very Good Production, which currently produces the ABC sitcom “Splitting Up Together” and the reality show “Ellen’s Game of Games.”

True to her company’s name, DeGeneres is very good at winning Emmys. She won Best Comedy Writing at the Primetime Emmys in 1997 for the iconic “Puppy Episode” of her self-titled sitcom, in which her character made history by coming out of the closet. And she has won literally dozens of Daytime Emmys for her syndicated talk show, which she has hosted since 2003. Will that luck rub off on Gellar?

Gellar has a Daytime Emmy of her own. She won for “All My Children” in 1995 when she was a teenager, but she was never even nominated in primetime for “Buffy the Vampire Slayer” despite the protestation of critics — and me. Then she returned to TV with regular series roles in “Ringer” (2011-2012) and “The Crazy Ones” (2013-2014), but both shows ended after one season.

Perhaps Gellar will have better luck with “Sometimes I Lie” since we’re in a golden age of sorts for female-driven TV projects adapted from novels, like “Olive Kitteridge,” “The Handmaid’s Tale,” “Big Little Lies” and “Sharp Objects.” All of those shows have been award-winners. Will “Sometimes I Lie” be a similar kudos success?