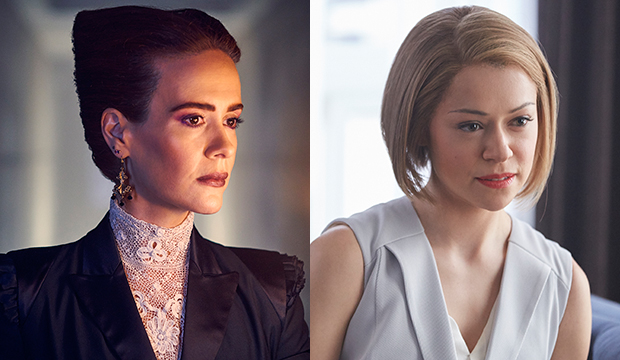 For the first time in eight seasons, “American Horror Story” will compete as a drama at the Emmys instead of as a limited series, since the “Apocalypse” installment was a “Murder House”-“Coven” crossover with, per the TV academy, “continuing story threads, characters and actors reprising those same character roles from previous seasons.” The show will have its work cut out for it to make the drama series cut, but acting bids are not out of the question. Jessica Lange probably has a guest nomination secured now, while Sarah Paulson could pull a Tatiana Maslany and crack the Best Drama Actress field.

How so, you ask? First, both have multiple nominations under their belts and one win; they even won in the same year, 2016, with Maslany taking Best Drama Actress for “Orphan Black” and Paulson scoring Best Limited Series/TV Movie Actress for “The People v. O.J. Simpson: American Crime Story.” Maslany, of course, played multiple clones on “Orphan Black,” and after the show skipped the 2017 Emmy cycle, not a whole lot of people thought she would make it back into the lineup in 2018 since “Orphan Black” had ended the summer prior. She was in 13th place in our Best Drama Actress odds last year, while we correctly predicted the other five nominees. Oops.

What does this have to do with Paulson? Well, she also played multiple characters on “Apocalypse,” reprising her roles from “Murder House” (Billie Dean Howard) and “Coven” (Cordelia Foxx), and inhabiting a whole new one, Wilhemina Venable. Sure, three is nothing compared to the, like, zillion clones Maslany played, but it is still impressive to voters, who’d see a list of character names staring back at them on the ballot and might just be so inclined to check you off.

FX’s FYC site lists all three characters next to Paulson’s name, so you can be sure that she will be submitted as such for the Emmy ballot as well.

On top of that, voters sometimes tend to go back to what they know and like if they don’t feel strongly about any other contenders. And in both Maslany’s and Paulson’s cases, we know the Emmys like them since, you know, they’ve won — especially Paulson, who’s been nominated for all but one season of “American Horror Story” since “Asylum.” And that miss was for “Roanoke,” which coincided with the 2017 death match between “Big Little Lies” stars Nicole Kidman and Reese Witherspoon, “Feud: Bette and Joan”‘s Lange and Susan Sarandon, Carrie Coon (“Fargo”) and Felicity Huffman (“American Crime”).

Paulson has debuted in 14th place in our Best Drama Actress odds after being moved over, so that’ll probably improve as more people adjust their predictions. The current top six is Sandra Oh (“Killing Eve”), Laura Linney (“Ozark”), Julia Roberts (“Homecoming”), Jodie Comer (“Killing Eve”), Emilia Clarke (“Game of Thrones”) and Robin Wright (“House of Cards”). But if Paulson is not in the top six by July 16, don’t be shocked if another underestimated former champ playing multiple characters crashes the party for the second year in a row.