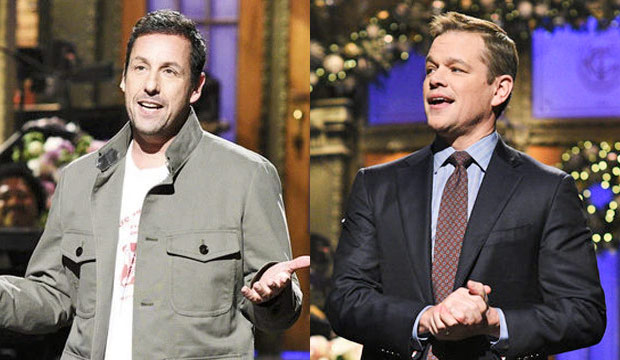 Each year “Saturday Night Live” does its best to only submit a handful of its guest stars on the Emmy ballot in an effort to try to focus voters’ attentions on select performances. NBC previously announced that they were entering a total of 12 such performers for Emmy consideration, but when the ballots were unveiled on Monday a whopping 16 guest stars had actually been submitted (11 men and five women). It’s possible NBC made adjustments before the entry deadline or that the new folks were submitted by their personal reps.

Of the 11 men vying for Emmy consideration this year, which ones do YOU think will receive nominations in Best Comedy Guest Actor? Jump into Gold Derby’s predictions center right now and start making your picks.

Season 44 of “Saturday Night Live” consisted of 21 episodes, with men hosting 14 and women hosting only seven. The nine male hosts up for Emmy consideration are Don Cheadle, Matt Damon, Adam Driver, Idris Elba, Seth Meyers, Jason Momoa, John Mulaney, Paul Rudd and Adam Sandler. The other two guest actors on the Emmy ballot are Robert De Niro and Ben Stiller, who popped up sporadically as Robert Mueller and Michael Cohen, respectively. Cheadle, Driver and Rudd are the three surprises on the ballot that were not previously announced by NBC.

Of this group of contenders, only Meyers, Mulaney and Sandler are former Emmy winners. Meyers and Mulaney both prevailed in Best Original Music and Lyrics for writing Justin Timerlake‘s 2011 “SNL” monologue, while Mulaney earned a bookend trophy last year for writing his variety special “John Mulaney: Kid Gorgeous at Radio City.” Stiller, meanwhile, took home an Emmy for writing his variety program “The Ben Stiller Show” in 1993.

On the Emmy ballot each guest submission is accompanied by a brief description of their work in the episode, so here’s all the info you need on this year’s “Saturday Night Live” contenders for Best Comedy Guest Actor:

Adam Driver
Adam’s monologue focuses on his lack of love for small talk. Sketches include Career Day in which he notably plays the oil baron, Abraham H. Parnassus; Coffee Shop playing the meathead half of a couple opposite Cecily Strong.

Idris Elba
Idris talks about his struggles before becoming a successful actor. Parodies include the Gayle King interview with R. Kelly; the Impossible Hulk as a whiny, middle-aged woman; a soccer broadcast and Gold Diggers of the WNBA. Two live performances by Khalid.

Seth Meyers
Seth talks about coming back to SNL while still working down the hall during his monologue. Parodies include Chris Redd, as Kanye West, rambling on to Donald Trump; Bill Cosby as a prison cellmate and a Cajun political talk show. Two live performances by Paul Simon.

Jason Momoa
Jason performs “Aqua Boogie” during his monologue. Parodies include Donald Trump Jr. reading a bedtime story to his little brother Eric; a distraught Elf On The Shelf who watches a boy going through puberty; “A Christmas Carol” and Rudolph Reindeer. Two live performances by Mumford & Sons.

John Mulaney
John Mulaney does his stand up routine for his monologue. Parodies include the Michael Cohen hearings; “Shark Tank”; “Scream”; a bodega bathroom; AMC covering a non sexy version of “To Have And Have Not” and a “remember my name” game show. Two live performances by Thomas Rhett.

Paul Rudd
In his monologue, Paul talks about his history with SNL. Parodies include Queen’s “Don’t Stop Me Now” with Trump and his administration; “The View” with Pete Buttigieg as guest and people being interrogated about their different alien abduction experiences. Two live performances by DJ Khaled and guests.

Adam Sandler
Adam returns to SNL and sings about how he was fired from the show in his monologue. Parodies include an Italian tour company; a Sandler family reunion, and Opera Man singing the news. Adam sings a touching tribute to his pal, Chris Farley. Two live performances by Shawn Mendes.