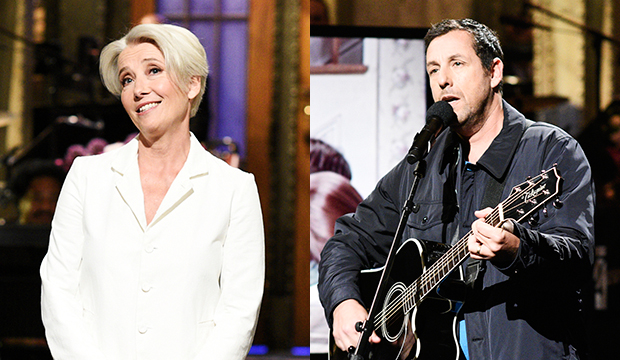 “Saturday Night Live” has ruled the comedy guest acting categories since it was allowed to compete there in 2009, claiming 10 wins in that time period. Among those victories were two sweeps of the Best Comedy Guest Actor and Best Comedy Guest Actress races in the same year, and now it will look to add a third.

In all the other years, “SNL” took home one of the guest awards every year except for two, 2013 and 2015, including last year when Tiffany Haddish triumphed. Bill Hader was also predicted to win for his “SNL” hosting stint, but Katt Williams (“Atlanta”) shocked us all. So odds are, it can probably snag one guest statuette in September.

“SNL” nabbed more slots in comedy guest actor than it ever had before with four nominations for hosts Matt Damon, John Mulaney and Adam Sandler, and recurring star Robert De Niro. The bid for De Niro, who plays Robert Mueller, marks the first time someone has been nominated in guest for “SNL” for not being a host. Damon, Mulaney and Sandler were part of three of the best episodes of the season (the show usually brings it when alums like Mulaney and Sandler return to host), and Sandler’s episode ended on an emotional high point with his tribute song to Chris Farley.

On the actress side, Sandra Oh and Emma Thompson reaped nominations. Both were in running for two acting nominations this year, but only Oh managed it, getting into drama actress again for her day job on “Killing Eve”; Thompson, who won this category for “Ellen” in 1998, missed out for her supporting turn in the TV movie “King Lear.” Oh’s situation is reminiscent of Jon Hamm‘s in 2015: overdue stars awaiting first win and also nominated in comedy guest (he for “Unbreakable Kimmy Schmidt”). Hamm lost the guest award but finally won Best Drama Actor for “Mad Men” on his last try.