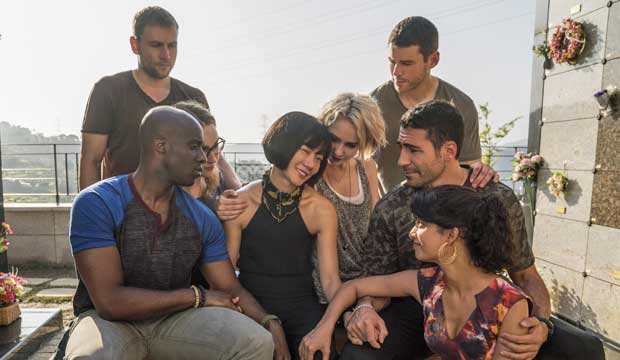 One of my favorite surprises in the 2019 Producers Guild Award nominations was the Best Television Movie bid for “Sense8: Together Until the End.” That was the feature-length finale to the Netflix sci-fi series about a group of strangers around the world who find themselves connected by a psychic link and hunted down by mysterious forces because of that link. Fans fought hard for that finale, so the recognition from the industry insiders who vote for the PGAs is especially gratifying.

“Sense8” originally aired two seasons from 2015-2017. Netflix then abruptly cancelled the series; the streaming service didn’t reveal what the viewership figures were for the show, but the international drama was one of the most expensive on their lineup thanks to its high production values and ’round-the-world locales, so Netflix decided to cut its losses. But fans revolted, and the outcry prompted Netflix to give the series one last hurrah: a farewell movie that would wrap up the show’s storylines.

“Together Until the End” premiered unceremoniously on June 8, 2018. That meant it wouldn’t be eligible for Emmys until 2019, so it seemed like it might be doomed with awards voters, who hadn’t warmed up to the show in the first place. The LGBTQ-friendly series won a GLAAD Media Award for Best Drama Series in 2016, but the only recognition it received from industry guilds were a 2016 victory from the Location Managers Guild International and a 2015 nomination from the Hollywood Post Alliance for the show’s color grading.

The only Emmy nominations the show received were for its main title theme music (2016) and its cinematography (2017), but now that it’s competing in the less crowded field of TV movies, perhaps it can finally sneak into the awards later this year, especially now that it has the PGA’s seal of approval; the Emmys and PGA Awards are both decided by industry professionals, so there’s a chance this love could carry over.

Two of “Sense8’s” PGA rivals already had their chance at Emmys in 2018 since they aired before June: HBO’s “Fahrenheit 451” and “Paterno.” The other two, like “Sense8,” will be up for Emmys in 2019: Amazon’s modern update of Shakespeare’s “King Lear” and HBO’s biographical drama “My Dinner with Herve.” But of course “Sense8” will also have to vie for Emmys against any other TV movies that air between now and May 31, so its path to Emmy bids this summer certainly isn’t clear of obstacles. But even if the “Sense8” team won’t really be together until the end, at least they’ll be together until the PGA Awards are handed out on January 19.