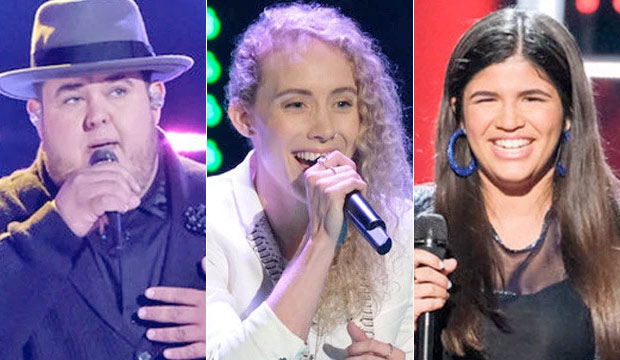 Tuesday night on “The Voice,” the Top 13 artists will become the Top 11 thanks to America’s votes. While many of the baker’s dozen singers who performed live on Monday night should easily make it to next week — we’re looking at you, Katie Kadan, Will Breman, Ricky Duran and Marybeth Byrd — there are several contestants on the elimination bubble. According to Gold Derby’s racetrack odds, the three artists in danger of going home during Tuesday’s results show are: Shane Q of Team Kelly Clarkson with 1/5 odds, Cali Wilson of Team Blake Shelton with 27/100 odds and Joana Martinez of Team Gwen Stefani with 8/15 odds.

Shane Q’s live performance of “My Wish” earned him strong notices from Kelly, who was thrilled he finally connected to the lyrics. He had dedicated the song to his mother, which no doubt helped him find an emotional connection for the first time this season. Shane’s previous songs this season were “Tennessee Whiskey” (blind auditions), “Too Good at Goodbyes” (battles), “In Case You Didn’t Know” (knockouts) and “Can’t Take My Eyes Off You” (playoffs).

Cali Wilson took on “Butterflies” on Monday night, which she dedicated to her loving girlfriend. After the performance Gwen proclaimed Cali to be one of her favorite contestants in the entire competition, while Blake was proud his artist finally found her lane. Cali’s previous songs this season were “Dreams” (blind auditions), “Miss Me More” (battles), “Wicked Game” (knockouts) and “Toxic” (playoffs).

SEEWill Breman’s ‘vulnerable’ ‘The Voice’ performance of ‘I Won’t Give Up’ nearly breaks John Legend: ‘I’m so proud of you’ [WATCH]

Joana Martinez’s song choice on Top 13 night was “Get On Your Feet,” a high-octane anthem she dedicated to her hometown of Miami. Gwen noted the physicality of her performance, noting the teenager had never delivered such a show on stage before. Joana’s previous songs this season were “Call Out My Name” (blind auditions), “High Hopes” (battles), “California Dreamin'” (knockouts) and “You Can’t Stop the Girl” (playoffs).

Do you think our readers are correct Shane, Cali and Joana are most in danger of going home this week? Only two will be eliminated, meaning the other will likely be saved by the live Twitter voters. Tune in to NBC on Tuesday, November 19 to see how it all plays out.