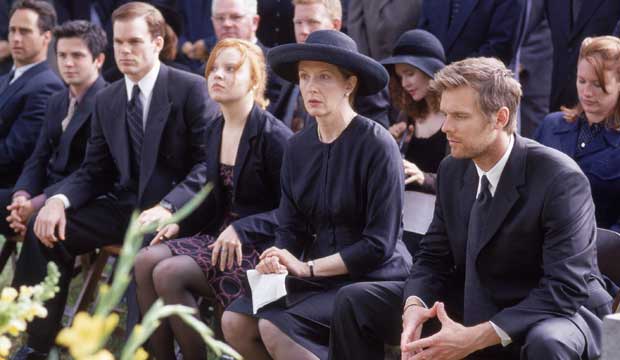 The Emmys eligibility period runs from June 1 to the following May 31. That calendar used to be strictly enforced until the year of the “Sopranos” finale, when the television academy instituted a rule allowing “hanging episodes” to be considered if a series aired its last few shows in June.

SEESurprise! Which 18 nominations will ‘The Handmaid’s Tale’ be fighting for at 2019 Emmys? [EXCLUSIVE]

But the last three episodes of “The Handmaid’s Tale” season two aired too late to even qualify as hanging episodes, and since the show isn’t returning for its third season until this June, those last three episodes of season two would never have been eligible if the academy didn’t decide to consider orphaned episodes this year. Now those achievements can be honored even though “Handmaid’s” won’t be eligible for Best Drama Series.

Which brings us back to “Six Feet Under.” HBO’s funeral home drama ran from 2001 to 2005. It ended two years before the “Sopranos” finale prompted the hanging episodes rule and long before orphaned episodes were considered. So it had episodes that never saw the light of day at the Emmys. The first was the season two finale “The Last Time,” which aired on June 2, 2002 and was therefore ineligible for consideration with the rest of its season. But the show was back the following March, so the series could conceivably have submitted “The Last Time” for consideration the next year along with the material from season three.

But then season three ended on June 1, 2003 with the episode “I’m Sorry, I’m Lost,” and that was the only episode “Six Feet Under” aired during the 2003-2004 eligibility period. It was orphaned just like “The Handmaid’s Tale” episodes were last summer, but “I’m Sorry” ended up “Lost” forever.

Would “The Last Time” and “I’m Sorry” have won Emmys if they had been eligible? It’s impossible to know for sure, but both were performance showcases for lead actor Peter Krause: in “Last Time” his character Nate undergoes a risky surgery, and in “I’m Sorry” Nate is emotionally distraught before his missing wife is found dead. Krause was nominated for Best Drama Actor both times, so if he had been able to submit either of them as hanging episodes he could potentially have won.

SEESize matters: ‘Game of Thrones,’ ‘Veep’ would combine for the fewest episodes to win drama and comedy series Emmys

As hanging or orphaned episodes, they also could have been considered for their crafts. “The Last Time” was written by Kate Robin, and “I’m Sorry” was written by future “Transparent” creator Jill Soloway. Both were directed by Alan Ball. None of them ever had a chance to be considered for their work on those episodes. Nor were editor Michael Ruscio, cinematographer Alan Caso, or various other craftspeople.

So I’m glad hanging and orphaned episodes will both be eligible for Emmys now as television scheduling has changed in the age of cable TV and streaming. I only wish that had been the case 17 years ago too.