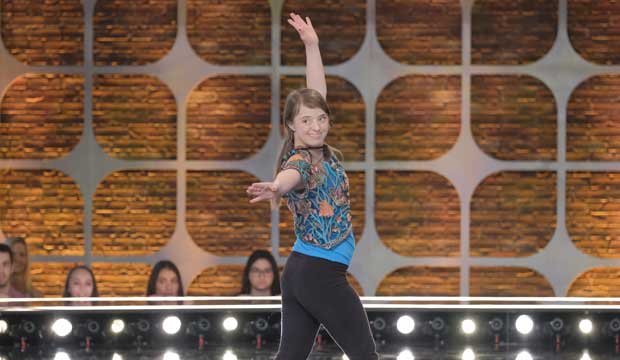 As the “So You Think You Can Dance” tryouts conclude, host Cat Deeley starts off by declaring Season 16 as having “the most incredible auditions we’ve ever seen.” Isn’t that what every reality talent show claims? It might be, however, the weepiest. Just beware there is a whole lot of waterworks going on in episode 5, so have a hanky — or even two — handy.

First up is salsa-dancing couple Andrew Avila, 25, and Melany Mercedes, 24, who both hail from the Bronx. They auditioned last year and took the judges’ critiques to heart. As they tell ballroom queen Mary Murphy, their style has more street flair than typical Latin dancing. Sure enough, they shimmy and shake like a pair of gelatin maracas. One lift was a little messy to my eyes, but they end great. Madame Murphy gushes, “I love the authentic look of this,” and she applauds how they went beyond tricks while “dancing their patooties off the entire time.” Andrew also lightened up from their first tryout. Or as he says, “I smiled my ass off.” Of course, they go through to the Academy.

Let's get it pumping! 🙌 #SYTYCD pic.twitter.com/OyMpjfsg3N

Michael Sales, 25, from Matawan, N.J., is up next. He says he was bullied a lot when he was growing up, not because of his dancing but just for being “that shy Filipino kid on the block.” He tried to be an athlete but no one accepted him on any sports team. Instead, he joined a breaking club in high school and fell in love with it. His skills gave him confidence and he felt “it was something I was meant to do.”

He works a lot of birthdays, weddings and Sweet 16 parties. In 2017, he was ranked among the top 100 b-boys in the world. And Michael is no fool. He tells judge and “SYTYCD” alum D-Trix that he is an inspiration for him. He certainly has all the right moves and they are pure fun to watch as he bounces and spins. Judge Laurieann Gibson practically drools over his “b-boy braggadociousness.” She adds, “Thank you for being in the pocket and paying honor to the groove.” Which, of course, translates into a trip to the Academy.

Her entire ❤️ is in this routine. #SYTYCD pic.twitter.com/JSgfVa6cwV

The third audition is a sprite of a girl in a burgundy velvet leotard, contemporary dancer Mariah Russell, 19, from Nashville. She, like several of the contestants this season, started watching the show when she was quite young, and her mom and brother are in the house to root for her. Laurieann asks where her dad is and she replies, “He’s actually in jail right now.” Whoa. Turns out she hasn’t seen him since she was 6 or 7.

She talks about her single mom working two jobs so she could dance and to show her kids “that she was very strong.” When Mariah dances she transforms from a girl to a graceful young woman who is poetry in motion, bringing tears to Laurieann’s eyes. “I see myself in you so don’t worry about what people think. You got to fight.” She adds that is what will make her a star. Mary says, “You smoked this!” The Academy is def in her future.

The SASS of it all! #SYTYCD pic.twitter.com/oXtJlIYhYz

Time for some inspiration courtesy of an extra-special 19-year-old jazz dancer — Phoebe Kochis from Denver. Her mom explains that when her daughter was born she was told, “We’re sorry, she has Down Syndrome. She will never do what you are expecting.” But Phoebe has a motto: “Reach for the stars.”

Turns out that around age two, she showed signs of dance ability including splits. They signed her up for dance class, her mom says, “and she just soared.” She performed in a pageant for girls with disabilities and she won Colorado. Auditioning for the show has been her dream since she was 6. She struts out on the stage like she already won. She is incredibly limber and has sass for days. Mary dubs her “a ham.” You know they will let her down gently, but they still allow her to go to the Academy.

SEE‘So You Think You Can Dance”: Winners list for Seasons 1-15

A familiar face is back to try again — James Cody, 26, from Grand Prairie, Texas, whose specialty is hip-hop and animation. Having already auditioned for season 10, 11 and 12, the guy is nothing if not persistent. The last time he made it to Vegas. He says he has had a couple ups and downs over the years, having been diagnosed with bipolar disorder type 2. “It can beat you up,” he says. His dad had the same condition and committed suicide — at 26 no less. Dance, for him, is a natural mood raiser.

I want to root for this guy. He is quite a mover groover, almost like a lanky cartoon figure. D-Trix gives him props but just hopes he can do the other dance styles, too. Nigel Lythgoe says he is brilliant at what he does but he doubts he did his homework with doing choreography. Laurieann suggests he strategize and humble himself for a bigger win. But the judges prove to be softies and he is bestowed with four yeses!

Maia is making sure you won't forget her name! #SYTYCD pic.twitter.com/laToMms6Aw

Contemporary dancer Maia Bliudnikas, 19, from Leominster, Mass., is sick of people calling her My-a instead of May-a.  But leave it Nigel to mess up her last name as he pronounces it “Blueknickers.” But The judge-in-chief makes up for that faux pas by declaring her musicality flawless and entertaining. She is the whole package – strength, agility, emotion and drama. Those newfangled bullet-time stop-motion cameras adore her, too. Mary goes a step farther, declaring her routine “one of the most perfect auditions of the season.” Of course, the Academy awaits.

Eddie is leaving it all on the stage… 👞😭❤️ #SYTYCD pic.twitter.com/n0IWTOCtD5

Last and definitely not least is a tap dancer who auditioned last season, Eddie Hoyt, 19, from Boscawen, N.H. He mentions that he came out as gay on TV when he was there before. “It was a relief, but it was hard, “ Eddie admits. His mom says it was difficult, since his parents didn’t know. But as his dad says, “You love your kids no matter what. You don’t have to hide it anymore.”

His life has only improved since then, getting a position to teach dance. As he starts tapping away, it is more like he is acting with his feet as he nails the emotion of the song. Yes, tears are shed — or, as Mary says, “I don’t think I’ve ever cried over a tap routine before.” Then, just to push everyone right over the edge, he admits he free-styled his routine in the moment. He is going to shuffle ball-change his way to the Academy.

Next time: There will be cuts, as they begin the whittling down process until they pick the Top 20.  In the meantime, take the poll below and tell us which of these final auditions had you prancing with joy. And don’t forget to tune into Fox at 9 p.m. ET/PT next Monday to watch “So You Think You Can Dance.”