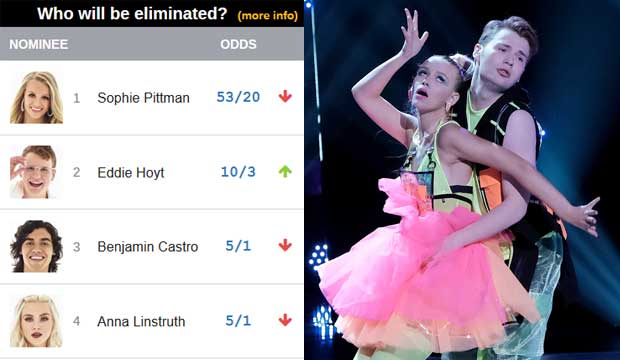 The first live eliminations of “So You Think You Can Dance” season 16 are tonight, August 19, and the Gold Derby users who have made their predictions here in our predictions center think contemporary dancer Sophie Pittman and tapper Eddie Hoyt are the two likeliest to be sent home. Do you agree with those forecasts? And do they really deserve to be booted from the show? Make or update your own predictions before tonight’s show.

Pittman and Hoyt were partnered for the live shows, and they both had to perform a duet outside of their comfort zone on their first night out. They danced a jazz funk routine choreographed by Brian Friedman, but the performance split the judges right down the middle — which is to say, they all praised one of them, and they all dissed the other. Nigel Lythgoe, for instance, thought Pittman “nailed it,” while Hoyt’s performance made him “uncomfortable.”

But even though Pittman fared better in the routine, our users give her leading odds of 53/20 of being eliminated. If viewers at home felt the same way the judges did about the performance, they may not have been motivated to vote for either contestant even though Pittman got stronger reviews. And fans may still think her spot in the live shows should have gone to Nazz Sldryan.

Hoyt ranks second in our elimination predictions with odds of 10/3, which makes him the likeliest male contestant to be eliminated. But they’re not the only couple our users think might be at risk. Benjamin Castro and Anna Linstruth are next in line, both with 5/1 odds of being sent home. The judges admired their cha cha during the first live show, but it didn’t get the kind of rapturous praise some of the other contestants got, so they might have fallen through the cracks when it came time for America to vote.

We’ll find out soon enough. Who do you think will be eliminated tonight?