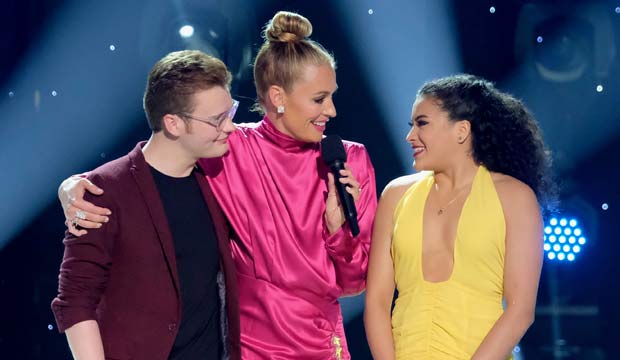 “So You Think You Can Dance” season 16 just started its live shows, and already there has been a surprise. I didn’t expect the judges to eliminate ballroom dancer Stephanie Sosa from the competition after she and Anna Linstruth landed in the bottom two based on America’s votes. And judging from our poll results, neither did our readers. Only 10% of respondents said Sosa deserved to be sent home. So what did the other 90% think should have happened? Scroll down to see the complete poll results at the bottom of this post.

Sosa was paired with contemporary dancer Gino Cosculluela for the live shows, and on their first night together the judges loved her hip-hop performance choreographed by Luther Brown, though they didn’t think her dance partner exhibited enough personality. But the judges gave both of them rave reviews during “Top 10 Perform, Round 2” when they danced a jive by Sasha Farber and Emmy Slater. So why did the judges decide to let go of Sosa when she landed at the bottom?

More than three-quarters of fans (76%) thought the judges should have eliminated Linstruth instead. The judges liked both of her duet performances thus far, but Mary Murphy was critical of her cha cha technique during the first live show, and Laurieann Gibson thought Linstruth’s hip-hop performance was lacking in the second, especially since hip-hop is Linstruth’s specialty. But after the judges deliberated they decided by a three-to-one vote to keep Linstruth and ditch Sosa.

My guess is that it was Gibson who dissented from the majority opinion since she was the one most critical of Linstruth’s second duet performance, but I was surprised the decision was otherwise so decisive. Perhaps the judges didn’t want to stack the deck for the Sosa family since they decided to save Stephanie’s brother Ezra from the bottom two. But our readers were so against the decision that 14% thought it would have been better to eliminate someone who wasn’t even in the bottom two (Madison Jordan, Mariah Russell or Sophie Pittman), which is more than thought Sosa deserved the axe. What do you think? Check out our poll results below, and predict who will go home next here in our predictions center. 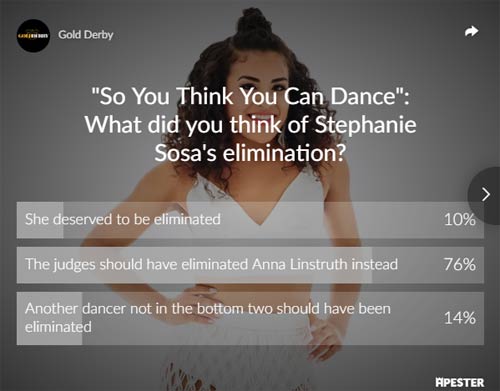