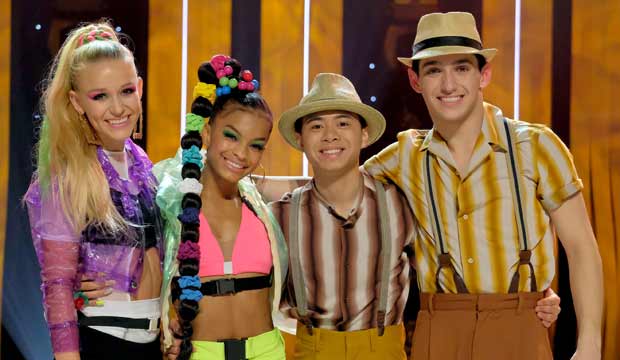 The dancers danced, and voters voted for the “So You Think You Can Dance” season 16 finale, so there was nothing to do but find out who won: Gino Cosculluela, Bailey Munoz, Sophie Pittman or Mariah Russell? Find out below in our live blog with all the minute-by-minute developments as they happen.

Munoz was the only b-boy left in the competition against a trio of contemporary specialists, but you wouldn’t know it from how well he picks up choreography in a variety of styles. In last week’s “Top 4 Perform,” the final competitive performance episode of the season, Munoz danced Broadway, Bollywood, hip-hop, and smooth jazz with all of his competitors and with all-star Comfort Fedoke. And Bollywood was the only dance for which he received any criticism from the judges — and even that was pretty mild.

No surprise, then, that Munoz was the front-runner to win going into tonight’s show. That was according to the combined predictions of “SYTYCD” fans who made their forecasts here in our predictions center. After that, Russell and Cosculluela were neck-and-neck in our odds for second place. And Pittman was the underdog in fourth place. We also polled our readers to find out who they think should win, and Munoz won that too. So if our readers are representative of America’s sentiment overall, this might have been a cakewalk for the brilliant b-boy.

Did the night go as we expected? Was there a huge upset at the last minute? And what do you think of America’s favorite dancer? Follow along below starting at 8:00pm (times listed are Eastern).

8:15 p.m. — Next we launch into some of the favorite routines of the season and Laurieann is choosing a piece from choreographer Luther Brown. This number paired Mariah and Bailey for a sexy hip-hop routine to “Tempo” by Lizzo featuring Missy Elliott. I’m happy this routine was chosen and it’s the moment I first thought Mariah could win this series. She’s the standout in this piece and her stage presence is EVERYTHING. Mariah and Bailey certainly do have amazing chemistry. What a way to begin the show!

8:20 p.m. — Up next, Nigel chooses the very sexy Ray Leeper routine featuring Ezra and Madison. In this sensual jazz routine to “You Can Leave Your Hat On” by Joe Cocker, both Ezra and Madison turn the sex appeal up to level 10 while they scorch across the stage. Aside from their brilliant chemistry, Ezra and Madison show off some killer technique in this piece and it certainly was one of the season’s best!

8:25 p.m. — It’s time for D-Trix to choose one of his favorites now and he’s going with the Travis Wall choreographed routine by Sophie and Eddie. Dancing to “When the Party’s Over” by Billie Eilish, Sophie and Eddie deliver a dramatic contemporary piece while flailing themselves over a mattress. This was a breakout piece for Eddie after a couple of tough weeks for the tapper so it’s nice to see him get the opportunity to perform it again.

8:35 p.m. — The next featured routine was chosen by the first featured finalist of the night, Mariah. The piece she connected most with was choreographed by Mandy Korpinen and Elizabeth Petrin and set to the music “Slide” by James Bay. Mariah felt fearless in this routine which featured a large prop shaped like the side of a rooftop that her and Bailey integrated into the piece with various slides and leaps. This was certainly one of the most memorable moments from the season, but I think I could say the same about any Bailey/Mariah performance!

8:40 p.m. — It’s Mary’s turn to pick a routine! She’s going absolutely wild for a Gino and Stephanie jive routine to “Long Tall Sally” by Little Richard. This is the routine that busted Gino out of his shell and revealed the personality the judges were begging him for. Stephanie is in her element with this dance and it was fun to see these two back together. This dance looks exhausting!

8:45 p.m. — Another group performance titled “Enough” by Travis Wall featured the Top 10 dancers performing a contemporary piece to “Sign of the Times” by Harry Styles. This was an incredibly emotional piece and fits perfectly with the music. It shows how explosive these dancers are and their ability to convey emotion proves that a bit of acting is needed to be a top dancer in this business. It ends with the dancers removing their shirts to reveal the word “Enough” written underneath them.

8:50 p.m. — D-Trix is choosing another one of his favorite routines of the season – this time from choreographer Aloe Blackstone featuring Anna and Benjamin. This Broadway routine to “I’ll Be Seeing You” by Tank and the Bangas wasn’t the toe-tapping jazz-hands Broadway routine audiences may have expected. Instead it was an emotional, slowed down piece that showed off incredible musicality between this duo as each move seems to fit perfectly with every musical note. Benjamin looks like a movie star on that stage and I really thought he’d go further in this competition. As a duo, they have incredible chemistry. I think they might be more than friends. Nice choice D-Trix!

8:55 p.m. — Mary seems to love her some Gino and she’s chosen another Gino piece – this time with all-star Comfort in the Luther Brown choreographed number to “Get Up” by Ciara featuring Chamillionaire. Gino redeemed himself with this hip-hop routine after his first one was not well-received, but I have to say I can’t keep my eyes off Comfort here looking flawless as Cleopatra. Overall, another great choice as one of the stand-out performances of the season.

9:00 p.m. — Sophie’s choice for her favorite dance of the season is a contemporary piece with Gino to “Will You Be Found” from “Dear Evan Hanson.” This is an emotional piece that brought Sophie and Gino together following the elimination of their previous partners. They delivered once again and by the end Sophie (as well as her Dad) were both sobbing.

9:05 p.m. — Next the Top 10 are joined by all-stars Cyrus “Glitch” Spencer and Lauren Froderman (who will also join them on tour) for an exciting hip-hop routine choreographed by Luther Brown. It’s a feast for the senses as the dancers are dressed in hypnotic colors as they get funky across the stage. If this high-energy routine is what we can expect from the tour, it should be worth the ticket price if they’re coming to a city near you!

9:15 p.m. — Another favorite from D-Trix is another Ray Leeper routine to “I Can’t Stand the Rain” by Tina Turner featuring the top three women – Madison, Mariah and Sophie. These three ladies absolutely own this routine draped in skin-tight black latex or rubber (or something?) with hats shaped like umbrellas. Fierce!

9:20 p.m. — Mary’s next choice makes her emotional because it’s Bailey and, quite frankly, Bailey makes Mary emotional no matter what he does. In Aloe Blackstone’s first Broadway number for Bailey with all-star Koine Iwasaki, they dance a flirty number to “Mambo Italiano” by Dean Martin. I agree with Mary. How can you not fall in love with Bailey when he’s dancing on that stage? The kid just knows how to entertain. Bravo! Mary’s crying. And the crowd is chanting “Bailey! Bailey!” Is it even possible for him to lose?

9:25 p.m. – Laurieann’s next choice is Bailey, Gino and Ezra in their routine to “Amen” by Amber Run. A ballroom dancer, contemporary dancer and B-Boy come together with awesome effect in this incredible number that shows why they were the top three men in the competition. Amazing routine. The audience is going crazy for these guys.

9:30 p.m. — Gino’s choice for his favorite dance routine of the season is his partnership with Sophie to the song “Trouble” by Elvis Presley. This sexy jazz number is one Gino says he will never forget and it looks straight out of a Broadway show. Gino is particularly the standout in this piece and some of the moves he pulls off look impossible. How many spins does can this guy do in the air anyways?

9:35 p.m. — Bailey’s choice for his favorite routine of the season his super sexy, leather clad Ray Leeper routine with Mariah to “Need You Tonight” by INXS. I think everything this duo did was a standout this season and this one is especially fun. The audience adores these two and both of them are definitely future all-stars that won’t soon be forgotten.

9:40 p.m. — It’s time for some results! These four are all fantastic and I won’t be disappointed by whoever wins. But it’s time for Cat to give us some news! The dancer in fourth place is…Sophie.

9:45 p.m. — Nigel would like to pick one more dance to see before the night is over – a jazz routine by Aloe Blackstone featuring Gino and Bailey strutting their stuff to “Girl from Ipanema.” Before they take the stage, Nigel mentions how short the competitive season was this year that next year he wants to drop the academy and have a Top 20. The audience loves that! Next, Bailey and Gino take the stage and these two are a couple of smooth operators. Bravo for another great performance!

9:50 p.m. — Laurieann chooses the final piece of the night featuring Ezra and all-star Gabby Diaz dancing to “Ne me quitte pas” by Jacques Brel. It was choreographed by fellow all-star Robert Roldan and it’s a masterpiece in technique and emotion. Somebody give Robert an Emmy nomination for this piece!

9:55 p.m. — Cat calls the Top 3 back to the stage for some more results. The difference between second and third place was less than one percent! But landing in third place is…Gino. It looks like Bailey and Mariah truly were the couple to beat all along!

9:59 p.m. — It’s time to find out who the Season 16 champion is! Bailey and Mariah have been partners all season and now they’ll finish as the Top 2. But only one can be the winner. Cat opens her envelope to reveal that winner is…Bailey! He becomes the first B-Boy to ever win “So You Think You Can Dance” and that wraps up an incredible season. I wish we got to watch more the 10 seconds of the celebration, but congrats to Bailey! What a well-deserved win.

“So You Think You Can Dance” Season 16 Champion: Bailey Munoz