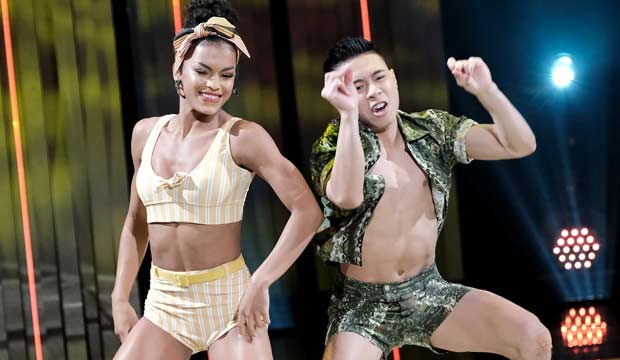 Mariah Russell and Bailey Munoz gave the best duet performance in the first live show of “So You Think You Can Dance” season 16. That’s according to the readers we polled for their reactions after Monday night’s competition. Do you agree with your fellow fans? Scroll down to see the complete poll results, and refresh your memory with our live blog of “Top 10 Perform” night.

Russell and Munoz got nearly half of the vote in our poll (46%) for their “Love Shack” jazz routine choreographed by Emmy winner Mandy Moore, which opened the show with infectious energy that no other performance of the night quite matched. Ranked second according to our respondents was the emotional contemporary routine by Ezra Sosa and Madison Jordan with 33%. Judge Dominic “D-Trix” Sandoval actually called that the best performance of the night, so he clearly didn’t vote enough times in our poll then.

“SYTYCD” viewers decide who stays and who goes at this point, so perhaps our poll, though unscientific, gives us a hint of which way the wind is blowing. If that’s the case, it looks like Russell, Munoz, Sosa and Jordan are in good shape to survive the first eliminations on August 19. But the other three couples were fighting for scraps in our poll, so maybe they’re also in trouble with fans voting for the show.

Benjamin Castro and Anna Linstruth were a distant third in our polling with 9% of the vote for their cha cha, followed by Stephanie Sosa and Gino Cosculluela‘s hip-hop routine with 7%. Our readers seemed to agree with the harsh judges’ critiques that Eddie Hoyt and Sophie Pittman‘s jazz funk number was the biggest disappointments; they only scored 5% of the vote. Who among them do you think is at greatest risk? Will Hoyt’s fans rally? Will Castro and Linstruth fall through the cracks? Will Cosculluela’s superior technical prowess not be enough to save him? Make your predictions for Monday night’s show right here. 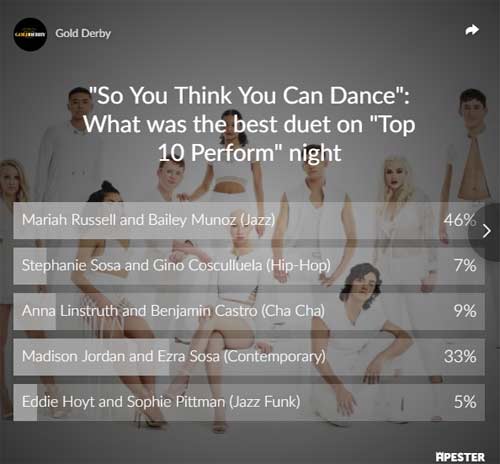