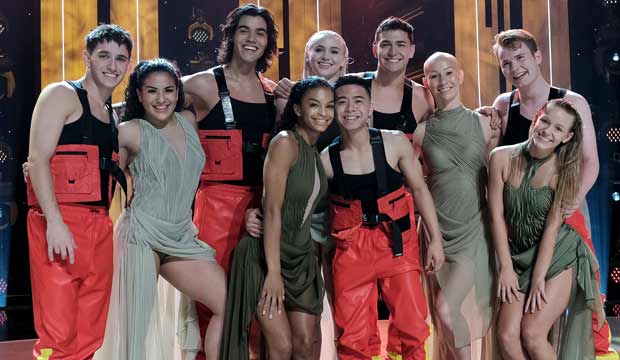 “So You Think You Can Dance” season 16 began its live shows on August 12, and this week we learned the results of America’s vote: which eight dancers moved on to the next round, and which unlucky two were eliminated? Find out below in our live blog with all the minute-by-minute developments as they happen.

The judges especially loved two duets from the season premiere: Bailey Munoz and Mariah Russell‘s jazz number and Madison Jordan and Ezra Sosa‘s contemporary routine. The readers we polled loved those dances too. However, the judges were “uncomfortable” with Eddie Hoyt‘s performance of jazz funk, though they praised his partner Sophie Pittman. And the technically gifted Gino Cosculluela got mixed reviews for his hip-hop dance opposite Stephanie Sosa.

But now that we’re in the live shows the judges’ critiques don’t matter as much as the opinions of viewers at home who voted online, on the FOX Now app, or via text message. Did Hoyt’s fans come to his rescue? Did Cosulluela get a second chance? Was there a big surprise when the results were announced at the end of the night? According to the combined predictions of “SYTYCD” fans who had made their forecasts here in our predictions center, Hoyt and Pittman were the likeliest dancers to be sent home, while the duo of Benjamin Castro and Anna Linstruth also looked vulnerable despite getting positive critiques for their cha cha.

All 10 dancers performed again before they learned their fates — more duets and more group routines. So tonight’s show presented an opportunity for last week’s struggling performers to redeem themselves. So how did this week’s dances compare? Follow along below starting at 9:00pm (times listed are Eastern), and watch our recent interview with Emmy-nominated choreographer Travis Wall at the bottom of this post.

9:01pm — Night opens with a group routine to Harry Styles‘s “Sign of the Times” choreographed by Travis Wall (we discussed this routine with him in our interview below) in response to America’s gun violence epidemic. Evocative imagery and an ending where the dancers shirts spell out “Enough.”

9:03pm — As usual, the judges will get to save two dancers from elimination at the end of the night from among the contestants who had the fewest votes from America, so tonight’s performance are doubly important for candidates who don’t want to go home.

9:05pm — The dancers are telling us about their first ever performances, and tiny Gino is just too adorable for words. They’re performing a jive choreographed by Sasha Farber and Emma Slater, who hope to bring out the personality that Gino was criticized for lacking in last week’s hip-hop number.

9:07pm — Pretty rock solid jive if you ask me, and Gino had personality for days.  Maybe a tad hectic from time to time, but that was an entire delight. And they got a standing ovation from the judges. Mary Murphy thought Gino was “hitting us with your greatness” and was the conductor of the Hot Tamale Train. Dominic “D-Trix” Sandoval said Gino was a “star” tonight and Stephanie was “equally as amazing.” Laurieann Gibson says, “I smell greatness.” And Nigel Lythgoe thought he had some of the sharpest jive moves since season two winner Benji Schwimmer.

RESULTS — Gino is safe from elimination based on America’s votes, but Stephanie is in danger of being eliminated. I can’t imagine them sending Stephanie home, though, unless maybe Madison is somehow the other female dancer in the bottom.

9:14pm — Eddie’s first performance was Highland dancing in a kilt as a child. Certainly less of a stretch than when Eddie had to do jazz funk last week. They’re doing a Travis Wall contemporary piece to Billie Eilish‘s “When the Party’s Over” this week, and Eddie is having trouble with partnering, but Travis hopes it will be their “redeeming moment.”

9:17pm — Eddie was definitely more at home in contemporary than he was last week, and of course Sophie is entirely in her element as a contemporary dancer. I’m glad they got this routine this week. D-Trix thought the emotion of the piece was “absolutely there.” Laurieann thinks Sophie is an “incredible storyteller” and Eddie brought a commitment to the emotional truth of the routine. Nigel thought Sophie was “brilliant” and Eddie was “marvelous.” And Mary thinks Sophie has “liquid gold” running through her body — sounds painful — and she was “so proud” of Eddie. Gratified to hear these great reviews from the judges. If they’re eliminated, at least they’re going out on a good note.

RESULTS — Eddie is in the bottom four, but Sophie is actually safe. I think that might be bad news for Anna because I doubt Mariah or Madison will be in the bottom.

9:26pm — Randi and Hef are choreographing a hip-hop routine for the duo this week, which puts Anna in her comfort zone and takes contemporary dancer Benjamin out of his. But he danced as a gladiator when he was six, so I don’t think confidence and attitude will be a problem.

9:29pm — Solid, fun, blinged out routine with sparkly costumes and prop jewelry. Like last week, they were good, but not my favorite routine of the night. Laurieann thinks dancing is Benjamin’s “calling,” but she tells Anna, “I missed you this week.” She wanted Anna to step up and deliver more. Nigel thought they “sparkled … I loved it.” Mary “loved it” too. And D-Trix thought it was “phenomenal.” It sounds like Laurieann was the only one disappointed with Anna’s performance.

RESULTS — Benjamin is safe from elimination, but Anna is in the bottom. It’s Anna vs. Stephanie as the bottom two women, so I have a feeling Anna is done for since the judges definitely won’t want to get rid of Stephanie. And since Benjamin is safe, I suspect Ezra is the other male dancer in danger, which might be bad news for Eddie since Ezra got such great reviews from the judges last week. We’ll see if Ezra delivers tonight.

9:35pm — This week they’re doing a sexy Ray Leeper jazz routine to “You Can Leave Your Hat On” that requires “a ton of chemistry,” and it’s difficult for Ezra and Madison to get “in sync.”

9:38pm — Terrific, sexy routine. Loved seeing Madison show a different side of her personality, though I still want to see her pushed more stylistically. Give her hip-hop or ballroom next week! Standing ovation from Nigel and Mary. Nigel thinks Bob Fosse would have loved Madison and the pair of them were “magnificent.” Mary thought they lived up to one of the sexiest songs in history. D-Trix admired the moment with Ezra’s “shiny and beautiful” chest. Laurieann was overjoyed by the routine too.

RESULTS — Ezra is in jeopardy, and Madison is safe. So both Sosa siblings are on the chopping block, but I think both of them will be given a reprieve by the judges. I think it’ll be Eddie and Anna going home.

9:45pm — They’re getting a Luther Brown hip-hop routine, but the good news for them is that they already know they’re safe since the bottom four slots have already been filled. Luther thinks Mariah is nailing it in rehearsals, and this is Bailey’s specialty.

9:48pm — Bailey and Mariah killed it, murdered it, massacred it, and Mariah with that split-twerk! That was probably my favorite routine of the night — fantastic technique and attitude, and a standing ovation from all four judges. Mary thought they were both “down in the pocket” and they’re “the couple to beat.” D-Trix thinks Mariah is a star and Bailey “brought that soy sauce.” Laurieann thinks the hip-hop community will be proud of them. Nigel thought Bailey was “strong” and Mariah was “incredible.” He agrees with Mary that they’re the couple to beat. I agree too. The first two weeks of the live shows have been dynamite for these two.

RESULTS — We knew they were safe, so Cat Deeley revealed that right off the bat. Time for the judges to deliberate about the bottom four contestants to decide which two will go home.

9:54pm — Nigel took into account both nights of the live shows, and it’s tough only having two nights of competition to judge on. They saved Ezra, so surprise there, which means Eddie‘s out. But then they booted Ezra’s sister Stephanie in what was a major surprise for me. It was a split decision: one of the judges apparently disagreed with sending Stephanie home. Maybe it was Laurieann, though was the one who criticized Anna’s work tonight. Honestly, I don’t know why they sent Stephanie home. Both of her live show performances were stronger than both of Anna’s from my perspective.