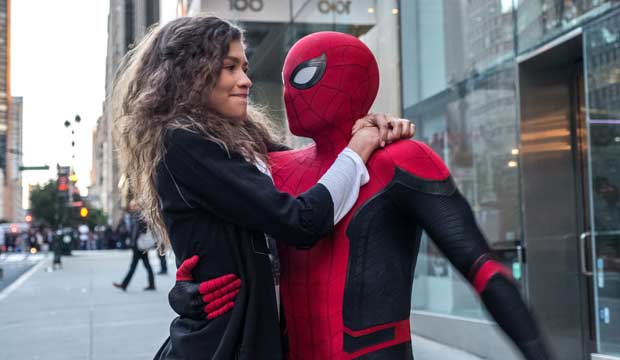 “Spider-Man: Far from Home” has a hell of a lot to live up to. It opened on July 2, less than three months after “Avengers: Endgame” paid off on 22 movies worth of storylines and immolated box office records in the process. So what do critics think of this, the 23rd Marvel Cinematic Universe adventure, as the franchise advances into its next era?

It wasn’t just “Endgame” that put pressure on “Far from Home” to perform. It’s also following 2017’s well-received “Spider-Man: Homecoming,” the web-slinger’s first full outing with (newly minted academy member) Tom Holland in the lead role. And perhaps even more daunting, it’s following the wildly ambitious animated film “Spider-Man: Into the Spider-Verse,” which wasn’t part of the MCU’s canonical storyline, but opened at the end of 2018 as one of the most acclaimed superhero films ever made — and it won an Oscar to boot.

The good news for “Spider-Man” is that most critics are happy to be “Home.” As of this writing it holds a 69 rating on MetaCritic based on 44 reviews — 30 of them positive, 14 mixed, none outright negative. Over on Rotten Tomatoes, it’s rated fresh by 93% of critics (166 out of 179). Rotten Tomatoes is a pass-fail aggregator, while MetaCritic measures more nuanced levels of like and dislike, so the difference between the two scores indicates that the vast majority of critics like “Far from Home,” but not very many are blown away by it.

But it’s more or less on par with “Homecoming.” That film had a slightly higher MetaCritic score of 73, but a slightly lower Rotten Tomatoes score of 92%. So it looks like Spidey has met expectations this time around, even if he hasn’t exceeded them. Reviewers continue to praise Holland and his co-star Zendaya as well as the film’s teen-comedy aspects, so much so that a few critics wish this story were more character-focused with less of the requisite CGI pyrotechnics. Nevertheless, it sounds like you can go “Home” again. Check out some of the reviews below, and discuss this and more with your fellow movie fans in our forums.

SEE‘Avengers: Endgame’ cast boasts Oscar winners and nominees galore with 18 — but is it the most ever? Not quite!

Tasha Robinson (The Verge): “The film clears that bar seemingly without effort. It’s an out-and-out triumph, an adrenaline blast of pure action and emotion that lives up to its predecessors and ably forwards the MCU story in memorable and even touching ways … It’s a breathless and admirably well-assembled movie that proves the Marvel formula still isn’t tired.”

Stephanie Zacharek (Time): “My one big wish for the 85 percent delightful ‘Spider-Man: Far from Home’ would be more Peter Parker/Spider-Man (as played by Tom Holland, genial but never cloying) and much more of his sidekicks, particularly his defiantly elusive crush MJ (played by the captivating Zendaya). What I could do with less of? A huge chunk of the movie’s last third.”

Ann Hornaday (Washington Post): “Both plotlines — Peter accepting the adult responsibilities that Tony prepared him for and finally getting on MJ’s vibe — unfold and intersect with chipper efficiency in ‘Far From Home,’ which thankfully continues in the same amiable high school comedy vein as 2017’s ‘Spider-Man: Homecoming’ … The best parts of ‘Far From Home’ aren’t the action sequences, which by now can’t help but feel rote and metronomically explosive, but the teasing banter and goofy peer-group dynamics”

Alex Abad-Santos (Vox): “All the false starts and dead ends make ‘Far From Home’ feel uneven, despite spirited performances all the way around, especially from Holland and Zendaya. It’s not until the movie’s halfway over that it finds its own independent rhythm, finally making meaningful storytelling decisions instead of alluding to them, and snapping back to life in the process.”