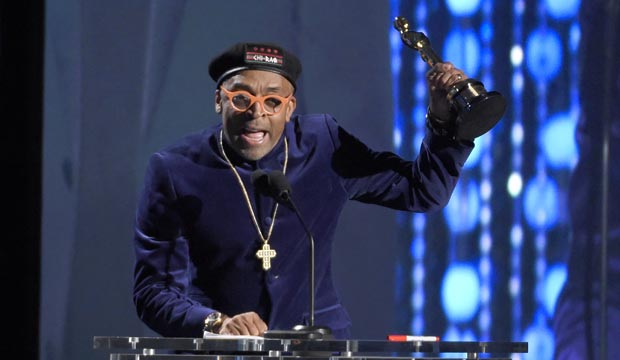 It was just three years ago that Spike Lee collected an Honorary Oscar, which is often the academy’s way of rewarding an overdue veteran who hasn’t picked up a competitive prize. But the iconoclastic filmmaker seems poised to return to the awards race in a big way with the hard-hitting “BlacKkKlansman,” which has already earned him nominations from the Directors Guild, the Producers Guild, the Writers Guild and much more. Should Lee win Oscars for writing, directing or producing — or all three — he’d join an elite group of people who have taken home the gold in a competitive race after receiving a career-achievement award.

There was certainly precedent for Newman’s late-career victory. Henry Fonda did the exact same thing when he won Best Actor for “On Golden Pond” (1981) one year after his honorary award. Prior to that the Hollywood icon had only been nominated at the Oscars for his lead role in “The Grapes of Wrath” (1940) and as a producer of “12 Angry Men” (1957), so to say he was overdue is an understatement.

Charles Chaplin actually won two honorary prizes before winning competitively. The academy handed him an honorary statuette at their very first ceremony for his overall work as an actor, writer, director and producer of “The Circus” (1928). Then almost 45 years later, after years in exile from America due to accusations of communism, he was welcomed back into Hollywood’s good graces with an honorary prize in 1972.

One year after that he won his competitive prize: Best Score for “Limelight,” a film that was actually produced in 1952 but wasn’t released in the US until two decades later. Prior to that he had earned three other competitive nominations, for acting in and writing “The Great Dictator” (1940), and for writing “Monsieur Verdoux” (1947).

The first person to win a competitive Oscar after receiving an honorary one was Laurence Olivier, though it was far from a career-achievement prize. The multi-hyphenate took home a special award for producing, directing, and starring in the Shakespeare adaptation “Henry V” (1946), only to win Best Actor two years later for another film based on the Bard’s work: “Hamlet” (1948). Gilding the lily as always, the academy handed him yet another honorary award in 1978, the same year he was nominated for Best Actor for “The Boys from Brazil” (1978).

Despite his impressive filmography, Lee’s own Oscar history has been sparse to say the least. His breakout hit, “Do the Right Thing” (1989), was snubbed from Best Picture and Best Director, ending up with just two nominations for Best Original Screenplay (Lee) and Best Supporting Actor (Danny Aiello). (It was no small irony that his bracing study of contemporary race relations was mostly overlooked the same year that the more benign “Driving Miss Daisy” swept the Oscars.) Lee competed once again for his documentary “4 Little Girls” (1997), but has been absent from the awards ever since.

“BlacKkKlansman” is more of the kind of envelope-pushing material that first put him on the map. After nominations at the Golden Globe, Critics’ Choice, BAFTA, DGA, PGA and WGA Awards, he seems almost assured Oscar bids for writing, directing, and producing. Should he triumph in Best Director, he’d become the first black filmmaker ever to clinch that prize. It would be a fitting tribute to a trailblazer who has already been honored for his career when his career was far from finished.