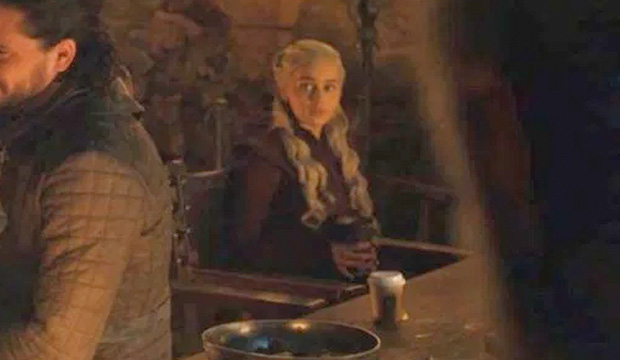 You’ve no doubt seen the viral “Game of Thrones” photo of a coffee cup on the table in front of Daenerys Targaryen (Emilia Clarke) from the May 5 episode, but now Starbucks has chimed in on the epic gaffe. “TBH we’re surprised she didn’t order a Dragon Drink,” the company wrote on Twitter, referring to their new tropical-inspired refreshment. When one fan asked Starbucks what dragons drink anyway, they replied in the most fanboy way ever: “Whatever they want.” That’s a direct reference to the Season 8 premiere in which Dany said that when her dragons get hungry they eat “whatever they want.” Well played, Starbucks.

UPDATE: Here is the official response from HBO: “The latte that appeared in the episode was a mistake. Daenerys had ordered an herbal tea.”

Of course, “Game of Thrones” is having the biggest laugh at all as it’s already won the Emmy for Best Production Design five times (2012, 2014-16 and 2018) and is likely the front-runner to prevail for this final season. The wayward coffee cup isn’t likely to detract at all from the show’s Emmy hopes this year, as all the extra publicity is simply bringing more attention to its intricate production design.

Even though HBO’s fantasy epic takes place in another time and place, that hasn’t stopped coffee cups from mysteriously popping up. In addition to this week’s cup on the Winterfell dining table, another cup was spotted in the hand of Jaime Lannister (Nikolaj Coster-Waldau) while at King’s Landing in a 2014 episode. Hey, is it possible that Bran (Isaac Hempstead Wright) is using his three-eyed raven abilities to bring back coffee cups from another dimension?

Our readers have been discussing every aspect of “Game of Thrones” Season 8, Episode 4, titled “The Last of the Starks” in our fun and fiery TV forums, where reactions are mostly focusing on the death of Missandei (Nathalie Emmanuel). Read a brief sampling of our forum posters’ comments below and then be sure to join the discussion to give us your thoughts.

Atypical: “Poor Missandei. That broke my heart seeing that and Grey Worm having to turn away.”

Kellis: “I can deal with Missandei’s death because that was beyond believable but Rhaegal’s? I’ll keep the specifics to what I think to myself.”

Wattsgold: “Emilia really seized the spotlight tonight. I have no idea about these upcoming nominations in Lead, but her despair was felt.”

Pulp: “Dany seems to be going the mad queen route and I’m totally fine with that, it’s what makes sense.”

Stegeo: “It is laughable Cersei and Euron are the final villains. Rhaegal’s death made no sense, hit by a fleet on a ship hidden behind a rock lmao. Missandei’s death wasn’t executed badly after all.”

Vinny: “Imagine the barista as Dany is going ‘Daenerys Stormborn of the House Targaryen, First of Her Name, the Unburnt, Queen of the Andals and the First Men, Khaleesi of the Great Grass Sea, Breaker of Chains, and Mother of Dragons.’ That is an episode I’d pay to see.”