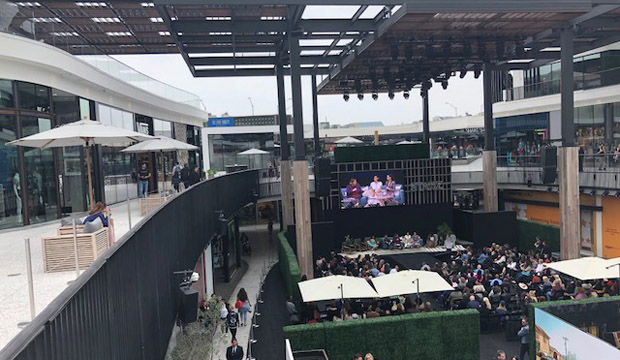 Starz made a clever move this year to attract Emmy voters shopping for contenders to list on their ballots. The network staged its lavish FYC event for “Now Apocalypse,” “American Gods,” “Vida,” “Power,” “Outlander,” limited series “The Spanish Princess” and docuseries “America to Me” at the Westfield shopping mall in Century City on June 2.

Why hadn’t any TV network thought of this before? Why should networks continue to hide their FYC celebrations in private event spaces inaccessible to the public when the whole point of putting on such a ambitious production is to draw as much attention as possible to your TV shows, talent and crafts? Just think of the legions of Emmy and guild voters who stroll through the Westfield on a typical day, swinging their Nordstrom, Apple and Tiffany bags while looking for diversions as they sip mocha cappuccino in a to-go cup.

SEEOverdue Emmy nomination for Caitriona Balfe (‘Outlander’)? One of our top users thinks so

Starz got their attention by taking over the central atrium with an open-air theater for cast-and-crew discussions surrounded by promo exhibits and refreshment stops. Academy and guild members could watch lively Q&A chats for a while, then take a break to sit down on Catherine of Aragon’s throne to take a selfie or to dive into an adult-size ball pit to celebrate the carefree spirit of “Now Apocalypse.”

“The intention of constructing our FYC event in a venue like the Westfield Century City was really two-fold – create a showcase that could capture and elevate all of the above- and below-the-line creative aspects of our Starz original series for Emmy voters and guild members and give consumers and fans an opportunity to experience our series in an immersive and engaging way,” says EVP of Communications Lauren Townsend.

“In creating a singular event for all our eligible series, we were able to curate a truly premium experience that demonstrated the breadth of programming and talent on the network. Attendees had the opportunity to meet the casts, hear a live read of a scene, view the amazing costumes, go behind the scenes of some of their favorite shows and speak directly to the people who made them. That kind of interactive experience doesn’t come with a mailer. Hence, Further Your Conversations … LIVE!”

Some of the event’s special attractions:

* For “American Gods,” guests could immerse themselves in a scene through virtual reality that highlighted the show’s special visual effects and cinematography.

* “Outlander” costumes were showcased on mannequins and the production design through models and blueprints that were set within a structure inspired by the cabin built by Jamie on Fraser’s Ridge in Season 4.

* For “Now Apocalypse,” an adult-size ball pit was created for guests to “swim” in.

* A portion of the iconic “Vida” bar was replicated to highlight the program’s production design. Melissa Barerra, Mishel Prada and Tanya Saracho conducted a live table read of a scene during their Q&A panel.

* For “The Spanish Princess,” a mock setting of the throne and Wells Cathedral was built out to spotlight the series’ outstanding production design.

* For “America to Me,” guests were transported into the halls at Oak Park and River Forest High School and immersed in the cultural impact and conversations surrounding the documentary series.

Lunch featured a runway costume exhibit that further showcased the outstanding period costumes from “Outlander” and “The Spanish Princess” and contemporary costumes from “Now Apocalypse” on a combination of mannequins and live models.