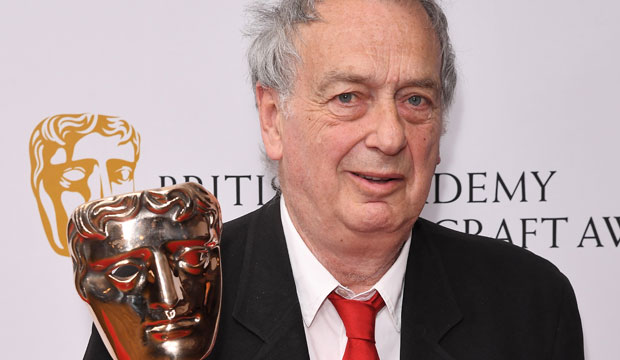 Director Stephen Frears is a man of few words. Quite notoriously, actually. After winning a BAFTA on April 28 for his helming of the limited series “A Very English Scandal,” he zoomed through the photography line, begrudgingly posing only for two or three photos with his golden mask. And then he ambled for our brief interview, handing his BAFTA to a PR person without a second look as if it were an empty glass of champagne.

Frears has quite a workmanlike attitude toward filmmaking. This attitude, while not rude, does result in some startlingly honest answers, He tells it how it is.  “A Very English Scandal,” was “very, very good fun, a very easy job. And I cannot stress easy enough. It was very well-written, we had very good actors, all of the nominees from our show who won tonight thoroughly deserve it. The others were robbed.” he says flashing a rare smile.

One of those talented actors is Hugh Grant, whose performance is a riotous one, full of fun, and is part of his joyous renaissance that includes a villainous turn in “Paddington 2.” But was Grant always going to be Frears’ Jeremy Thorpe in “A Very English Scandal?”

“I don’t know what always means. They came to me and I immediately said ‘we should ask Hugh’ and that was really the end of the conversation. Grant fitted in well with Russell T. Davies‘ script.” It’s Davies’, Frears says, who really made this mini-series work. “He’s a wonderful writer. He’s very funny, he’s very cheeky, he’s naughty, mischievous, but also very moving. He’s just terrific.”

Frears is no stranger to the attention of awards groups after a string successful films including “Dangerous Liaisons” (1988), “The Grifters” (1990) and “The Queen” (2006); the latter two of which earned him Oscar nominations. But does awards glory still mean as much today as it once did? Frears laughs at the question. “Of course! It’s great.” But what’s better?

I couldn’t resist asking if this BAFTA win trumps his Oscar bids for Best Director. “It’s not a competition,” he tells me with a twinkle in his eye that suggests ‘give all the awards to me and I’ll tell what is best.’ “It’s lovely to be here and to win awards. I have to say thank you to everyone who’s given me one.” His final words before he sped off back to his dinner table (and he was clearly itching to go), was a few words of advice for young writers and directors. The word ‘few’ is stressed here. “Courage. Courage, courage, courage. And I hope you’re as lucky as I am!”