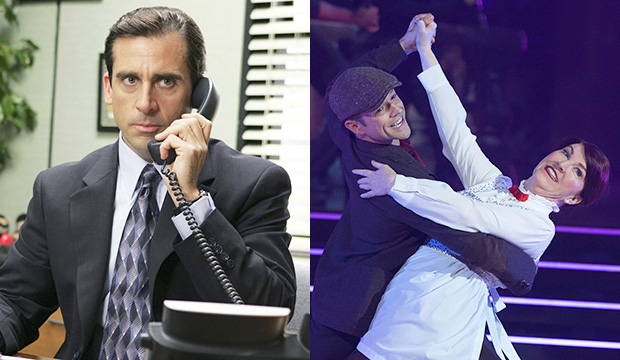 A bunch of Kate Flannery‘s old “Office”-mates have attended “Dancing with the Stars” tapings this season, but her old Dunder Mifflin boss, Steve Carell, hasn’t had a chance to yet. That doesn’t mean he’s not paying attention, though, as the actor relayed a video message to Flannery via “Entertainment Tonight.”

Flannery, whom Carell calls “one of the nicest people,” is nearly reduced to tears as she watched the clip after Monday’s show with her partner Pasha Pashkov. “Oh my God. Steve Carell. I’m gonna cry,” she said. “He’s the greatest.” Pashkov, meanwhile, was in disbelief he was watching a message from Michael Scott. “What?!” he exclaimed.

This was not the first time Carell has cheered on Flannery in her Mirrorball endeavors. Before the Week 4 show earlier this month, the “Morning Show” star tweeted “Go Kate.”

Flannery replied, “Thank you so much Steve, You’re the worlds [sic] greatest boss! Thanks for having my back,” along with a photo from the iconic “Office” episode “Fun Run,” aka the one where Michael hits Meredith with her car and then organizes Michael Scott’s Dunder Mifflin Scranton Meredith Palmer Memorial Celebrity Rabies Awareness Pro-Am Fun Run Race for the Cure (honestly, let’s hope they can somehow do a routine inspired by this).

Thank you so much Steve, You’re the worlds greatest boss! Thanks for having my back. ❤️#teamthatswhatkatesaid pic.twitter.com/9vH4EQ6sXZ

Flannery had a pretty memorable Monday overall. She rebounded from last week to get a 24 for her “Mary Poppins” jazz routine. And then she and Pashkov came to Carrie Ann Inaba‘s rescue after she fell off her chair. “It, like, goes in slow motion,” Pashkov said of the judge’s blunder. “When you see, you wanna help. You’re like, aaahhhh. She’s down, it’s too late.”

'The Bachelorette' episode 7 recap: Tayshia bonds with Ivan over race and fires back at the…

Dear Golden Globes: Don’t drive a stake through the heart of ‘What We Do in the Shadows,’ nominate it instead