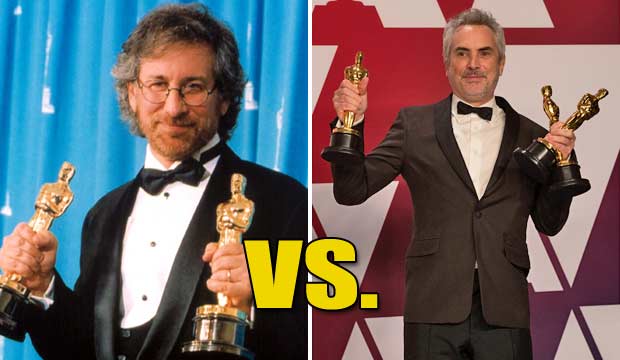 Steven Spielberg has made no secret of his opposition to streaming movies competing at the Oscars. Now, after Netflix’s “Roma” earned 10 nominations including Best Picture and won three prizes including Best Director (Alfonso Cuaron), Spielberg is looking to make that official. As an academy governor representing the directors branch, he reportedly wants new rules to restrict the participation of streaming services. But is he picking the wrong fight? Scroll down to vote in our poll at the bottom of this post.

I, for one, think his campaign against streaming services is misguided. Granted, it’s always a cause for concern when a big company throws it weight around to crowd out competitors, so it’s understandable to be wary of Netflix swerving into someone else’s lane with their Oscar ambitions. But Spielberg himself benefited from changing the face of the industry: his 1975 film “Jaws” ushered in an era of summer blockbusters in the wake of its unprecedented TV ad campaign. He helped transform Hollywood, but suddenly he doesn’t want anyone else on the turf he created.

Picking a fight with “Roma” seems especially inappropriate. In general, looking for purity in media and how it’s consumed these days is tilting at windmills. And for movies like “Roma” in particular, the argument neglects the value of access. Under a more traditional model, an art film like this would have been available on the big screen only for a lucky few in the largest cities (and not all art-houses are equipped to give you a much better sensory experience than a reasonably good smart TV). That would have been followed several months later by a home video release, which is how most viewers would have been able to see it anyway.

What Netflix did instead was make a black-and-white Spanish-language drama without recognizable stars available to everyone everywhere at the height of public interest, and they made an underdog of a movie into a top dog of an awards contender. If you’re picking a fight with “Roma,” are you really fighting for art? Think of how many other international films, documentaries and short films can be much more widely seen and discussed because streaming makes them available outside art house markets.

Fellow filmmaker Ava DuVernay argues against Spielberg’s crusade. She tweeted, “This is a Board of Governors meeting. And regular branch members can’t be there. But I hope if this is true, that you’ll have filmmakers in the room or read statements from directors like me who feel differently.” She later added, “One of the things I value about Netflix is that it distributes black work far/wide. 190 countries will get ‘When They See Us.’ I’ve had just one film distributed wide internationally. Not ‘Selma.’ Not [‘A Wrinkle in Time’]. It was ’13th.’ By Netflix. That matters.”

Netflix Film also responded on Twitter: “We love cinema. Here are some things we also love: Access for people who can’t always afford, or live in towns without, theaters; letting everyone, everywhere enjoy releases at the same time; giving filmmakers more ways to share art. These things are not mutually exclusive.”

The question of how much money is spent on campaigning is a legitimate one, but a separate one. Netflix reportedly spent astronomical sums to promote “Roma” to the motion picture academy, so you could argue that they tried to “buy” an Oscar. Maybe there really should be more Oscar campaign finance reform so big players can’t bury smaller distributors. But Oscar campaigning is not only commonplace it’s unavoidable; every Oscar winner in recent decades has been supported by awards promotion, so if you are one of the big players worried that Netflix is encroaching on your territory, are you mad that they tried to buy Oscars, or are you mad they outbid you?