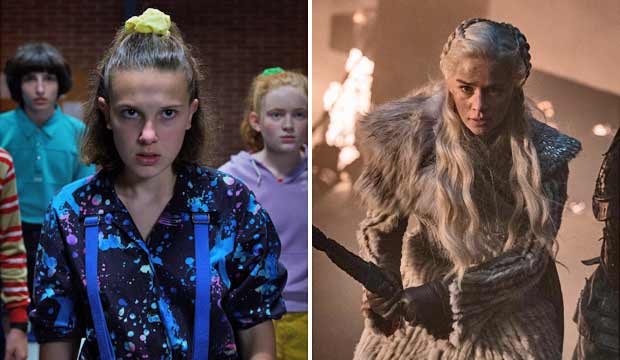 “Game of Thrones” earned 32 Emmy nominations this year, more than any other continuing series in Emmy history. It might have been greatly helped by how many shows didn’t compete this year. “Westworld,” “The Handmaid’s Tale,” “The Crown” and “Stranger Things” took the season off, and just those four shows accounted for 66 nominations last year. Clearly a lot of those available votes went to “Thrones.” But the HBO fantasy met with a lot of public criticism for its last season, so now that we’ve seen “Stranger Things” season three, which show do you think would have won in a head-to-head battle if they had to compete against each other? Scroll down to vote in our poll at the bottom of this post.

“Stranger Things” won 6 Emmys out of 30 nominations over the course of its first two seasons, but it took almost two years for the show to return for its third season this July, so it didn’t have any episodes eligible to compete in this year’s race. That might be just as well since now the show can compete in 2020 without the shadow of “Game of Thrones” looming over it. The new season earned reviews on par with previous years, and Netflix, despite usually keeping its viewership numbers under wraps, was quick to boast about how many people watched the new episodes, which rivaled the numbers “Thrones” was getting. In this era of peak TV, visibility is half the battle at the Emmys, so “Stranger Things” might have given “Thrones” a run for its money for top nominations.

That said, “Thrones” has already won Best Drama Series three times, and it was so widely seen that even if it were true that most members of the television academy hated the final season, it could still win in a divided field on the strength of the voters who loved it. The series has won more Emmys than any primetime comedy or drama in history. It also holds the record for the most victories for a continuing series in a single year (12 in 2005 and 2006). And even though both “Thrones” and “Things” are fantasy shows, voters tend to favor adults dramas over shows headlined by kids.

It’s probably better for both shows that they didn’t have to compete against each other. But if they did, which do you think would have won?