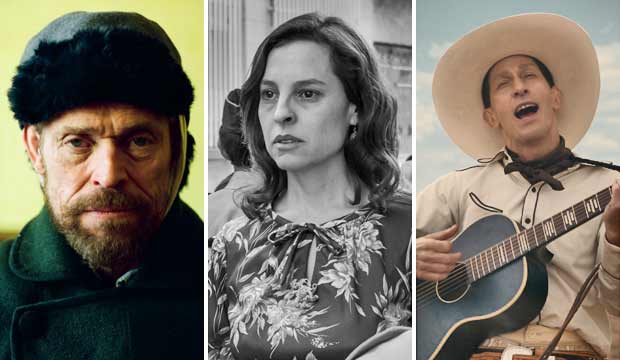 There were a number of shocking snubs in this year’s Oscar nominations, which were announced on Tuesday morning, January 22, But awards are a zero-sum game, so for every surprise omission there was a surprise inclusion. This year, across all categories, there were 27 nominees our racetrack odds missed the boat on. Scroll down to see which nominees caught us off guard, and check out the complete list of nominations here.

There was only one nominee so unexpected it wasn’t even in our predictions center: “Never Look Away” for Best Cinematography. That German drama, also a surprise nominee for Best Foreign Language Film, was lensed by Caleb Deschanel, who has now been nominated in the category six times without a win. And this nomination also meant that three out of the five contenders for cinematography are foreign language films.

Gold Derby’s odds were rock-solid in many of the top categories, though. The top eight films in our Best Picture forecasts ended up being the academy’s eight nominees. And we went five-for-five in the Best Actress race. In fact, there were only three acting nominees our odds underestimated, including Sam Rockwell (“Vice”), who earned a bid for Best Supporting Actor over Timothee Chalamet (“Beautiful Boy”).

But the other two acting surprises were whoppers. Willem Dafoe earned Golden Globe and Critics’ Choice nominations for his performance as Vincent Van Gogh in “At Eternity’s Gate,” so maybe we shouldn’t have been so surprised by his Oscar nom for Best Actor, but we nevertheless thought he was a 100/1 long-shot. The same was true for Marina de Tavira, whose Best Supporting Actress bid for “Roma” was the first major recognition she received for her performance all season.

SEE2019 Oscars: How many women are nominated beside the 10 acting contenders (Hint: still not enough)

One film we dropped the ball on not once, not twice, but three times was “The Ballad of Buster Scruggs.” It was nominated for Best Adapted Screenplay, Best Costume Design and Best Song (“When a Cowboy Trades His Spurs for Wings”), none of which we saw coming. That was especially true of the Screenplay nom since we previously expected the film to compete as an original script, not adapted. The anthology film’s segments “All Gold Canyon” and “The Girl Who Got Rattled” were actually based on previously published short stories. But whatever the category, that’ll teach us to ever underestimate the Coen Brothers again.

OUT OF NOWHERE
This nominee was so surprising that it wasn’t even in our predictions center.

HUGE SHOCKERS
These contenders were nominated despite long-shot odds of 100/1.

Best Documentary Short
“A Night at the Garden”

CLOSE CALLS
We knew they had a shot, but these contenders weren’t among our predicted nominees.