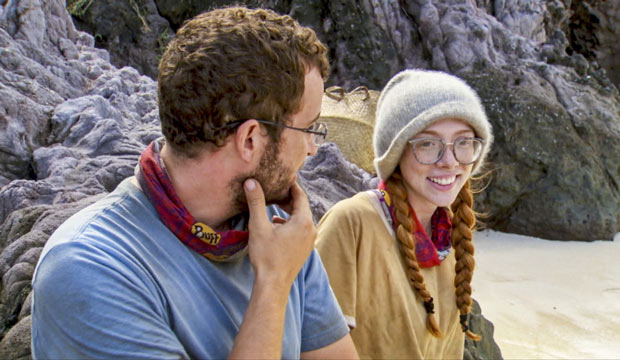 After last week’s shocking “Survivor: Edge of Extinction” tribal council in which the entire Vata tribe imploded on itself, only 10 castaways remained in the hunt for the $1 million prize. They are former Kama allies Victoria Baamonde, Ron Clark, Aurora McCreary, Julie Rosenberg and Gavin Whitson, and Manu/Lesu tribe mates Dan “Wardog” DaSilva, Rick Devens, Lauren O’Connell, Kelley Wentworth and David Wright. So which TWO castaways ended up being voted out across a pair of tribal councils in Wednesday’s 10th episode?

Below, check out our minute-by-minute “Survivor” recap of Season 38, Episode 10, titled “Blood of a Blindside,” to find out what happened Wednesday, April 17 at 8/7c. Then be sure to sound off in the comments section about your favorite castaways on CBS’s reality TV show and who you think will ultimately join the “Survivor” winners list. Keep refreshing/reloading this live blog for the most recent updates.

8:00 p.m. – “Previously on ‘Survivor’!” In last week’s ninth episode, Julia Carter was sent to Extinction Island after underdog Rick convinced all of the outcasts that they actually had the power to change the game if they voted together. Cue the chaos. Host Jeff Probst sat back and watched as all of the players scrambled and huddled up until finally the majority decided to eliminate Julia. Tonight there will be two tribal councils, so two more people are about to follow Julia to the Edge of Extinction. Exciting!

8:01 p.m. – Following that chaotic tribal, Wardog was on the war path looking to build a new alliance with Julie, Gavin and Ron that could control the game going forward. He sees an opening where the original Kama is so broken that anything is possible.

8:03 p.m. – This week’s first immunity/reward challenge required each player to hold a squat position that if they dropped too low or went too high they’d drop an urn and be out. The reward aspect of the challenge was in Jeff’s temptation for anyone willing to sit out the challenge and eat pizza instead. Sacrificing their chance at immunity was Kelley, Ron, Victoria and Lauren.

8:05 p.m. – Early into the challenge a butterfly landed on Wardog and caused him to drop his urn, then Gavin and Julie both dropped as well, leaving only David, Rick and Aurora standing. When Rick fell out, David asked Aurora how she’s doing and her response was that she knows how badly she needs it and is determined to not lose. Sure enough, she held her position and when David faltered Aurora won her second individual immunity!

8:12 p.m. – With Aurora winning immunity everyone’s plan to vote her out is thwarted and so they’re forced to turn their attention elsewhere. The “six” decide that it’s finally the time to get David out, but Wardog’s wheels start turning and he considered how trustworthy Julie and Ron can be. Elsewhere, David and Rick decide that it’s time to get Wardog out, thinking that Wardog/Kelley/Lauren have been together the entire game and that one of them needs to go.

8:16 p.m. – In a private conversation, Ron and Julie feel like they have all the power, but the choice between Wardog and David is the decision of who is more threatening at the end of the game. Wardog is someone they think could beat anyone in the final three while David is less trustworthy in terms of getting there.

8:18 p.m. – At the first tribal council, Jeff brought up the concept of loyalty, asking both Rick and Julie where they’re coming from considering their actions at the chaotic tribal council. They both suggest that breaking loyalty as they have already in the game brought them to a point where they’re being more loyal. Later, the trio of Kelley/Lauren/Wardog is attacked for their loyalty to each other with Rick making a passionate pitch that one of them must be voted out. Ron clarifies that he and Julie are making their choices based on who treats them the best.

8:24 p.m. – On David’s first morning on Extinction Island, the castaways got a message in a bottle with another clue to an advantage. They all scattered across the island looking for what they thought the clue alluded to, but Eric’s search at the food storage and then Joe and Chris’ search by the mast came up short. It was David that wound up finding it, giving him an opportunity to give an advantage at the next immunity challenge to someone still in the game.

8:30 p.m. – For the second immunity challenge of the night the players had to balance a large paddle in order to get five balls into small dimples. David bequeathed his advantage to Rick (obviously) which meant that he’d only have to land four balls.

8:32 p.m. – Rick, Ron and Aurora were the first to stick balls in and even with his advantage, Rick became the first to get a second. Aurora and Ron caught up behind him, but they’d need to pick up the pace to surpass him.  By the time he got a third (and working on his fourth and final), Ron and Aurora still needed to catch three while everyone else struggled to even land one. As Rick was trying to land his fourth ball, he hit one of his balls twice, knocking it out and having to land his third again, but on his third try he got the fourth to stick and won immunity!

8:39 p.m. – This time the former target Aurora was not safe with immunity and so she was one of the names on the table for everyone to agree on. The newly formed “six” agreed that it’d be an easy vote, but Wardog saw bigger threats since Aurora has no allies in the game. His target then became Kelley, his own longtime ally. He knew he had to be stealth about it and so he had very brief conversations with Rick, Aurora and Victoria to vote Kelley, but it was a much bigger conversation to have with Ron. It was a shock to Ron, seeing the unpredictability in Wardog and feeling like it’s a tough decision between the threat of Kelley and the lack of trust in Wardog.

8:42 p.m. – Aurora and Victoria discussed whether or not Wardog was being truthful about going after Kelley. Aurora still holds her extra vote advantage and so in her sense of uneasiness she decided to approach Ron with a deal, she’d give him her advantage as a sign of trust. That put Ron in a very interesting position in the middle where he could decide on going along with Wardog to take out Kelley or he could stick to voting out Aurora and keep her double vote advantage for himself.

8:49 p.m. – At the second tribal Jeff wanted to talk about blindsides, remarking that almost everyone on the jury was sent there after not expecting to. Ron said that the “taste of a blindside” makes people want to do it again against someone else and pretty much everyone else agreed, but added that blindsides aren’t always the right decision. Victoria and Aurora acknowledged that they feel like they’re on the outs of everyone else, but pointed out that it means there are more threatening people with stronger ties still in the game. Jeff also brought up the fact that only one advantage and one idol have been played in the game, both by Rick, leading everyone to assume that all the advantages are on Extinction Island instead of in the game.

NEXT WEEK: Wardog and Gavin butt heads with one another which causes Wardog to join forces with Ron and Rick as a power trio, but that sets everyone else on the path to take Rick out in another blindside.

Here are the answers to Gold Derby’s contest questions for “Survivor” Season 38, Episode 10:

Who will be voted out at tribal council? David Wright and Kelley Wentworth

Who will win Immunity? Aurora McCreary and Rick Devens

'Survivor' Medevacs: See All Medical Evacuations Through The Years