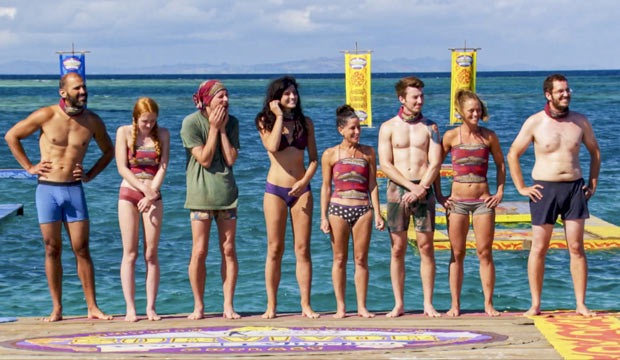 Following last week’s double eliminations of David Wright and Kelley Wentworth on “Survivor: Edge of Extinction,” only eight players still remained on the Vata tribe: Dan “Wardog” DaSilva, Victoria Baamonde, Ron Clark, Lauren O’Connell, Julie Rosenberg, Gavin Whitson, Aurora McCreary and Rick Devens. Did Wardog continue calling the shots at camp this week, or were the outcasts smart enough to come together to remove him from his throne?

Below, check out our minute-by-minute “Survivor” recap of Season 38, Episode 11, titled “Fasten Your Seatbelts,” to find out what happened Wednesday, April 24 at 8/7c. Then be sure to sound off in the comments section about your favorite castaways on CBS’s reality TV show and who you think will ultimately join the “Survivor” winners list. Keep refreshing/reloading this live blog for the most recent updates.

SEE‘Survivor’ video recap: Will Wardog be voted out next after his villainous blindside of Kelley? [WATCH]

8:00 p.m. – “Previously on ‘Survivor’!” In last week’s 10th episode, Wardog made the cutthroat decision to blindside his closest ally in the game, Kelley. He enlisted the help of Aurora, Rick, Ron and Victoria to take her out, which meant Gavin, Julie and Lauren were left out of the loop. With Wardog’s head now on the chopping block, can he survive tonight’s tribal council, or will he be voted out and follow David and Kelley to Extinction Island? Let’s find out!

8:01 p.m. – Most affected by Kelley’s ousting was Lauren, her closest ally throughout the entire game. Like Kelley did, Lauren has a hidden idol in her possession and though that is useful she will need people on her side in order to make it work for her. But now she finds herself with few options to turn to.

8:02 p.m. – Also left out of the vote was Gavin who trusted Wardog completely. Now Gavin wants Wardog out next and Wardog is pushing back against him as someone that has just followed the numbers the entire game. Ron wasn’t happy with the way Wardog was speaking to Gavin though and found a gap in that relationship to step into and possibly pick up Gavin as a vote for his side. That being said, he also wanted to mend fences with Julie and he did just that–the two of them solidified their bond to each other when Ron told her about how Aurora had given him possession of her double vote.

8:05 p.m. – For Rick the only path forward would be for him to continue to work with Ron and Wardog, two guys that everyone else has their sights on–in fact he coined the phrase, “We’re each other’s biggest threats and only hope.” In his mind, as long as they start picking off the fence-riders they’d be able to secure their position in the game and prevent them from binding together to take them out. Their first target? Challenge beast Aurora.

8:07 p.m. – At the reward challenge Jeff divided the final eight into two teams of four for a water challenge. For the winning team, a trip for a relaxing day at a spa with food! In the schoolyard pick the teams were: Blue – Lauren, Rick, Julie and Wardog; Yellow – Victoria, Gavin, Aurora and Ron.

8:09 p.m. – On the blue team, Wardog got off to an awkward start and when Aurora came on the scene for the yellow team she blasted them into a comfortable lead. As such, yellow was the first team to start tossing their rings in order to be the first to hook three on the posts. Gavin didn’t do so well on the toss, allowing Rick to catch up and ultimately land his three rings first for the win!

8:15 p.m. – At Extinction Island for the first day, Kelley reunited with Joe Anglim who she knows from their time on the Second Chances season. For Kelley, the game hasn’t been fun and she expects to continue to beat herself up over her failures in the game. Someone that was happy to find her on the island though was Reem Daly, who Kelley helped vote out from the game first. What Reem pointed out to Kelley is that everyone at Extinction Island is mad at someone and that the journey there is about being open with each other about it and moving on from it. Love Reem!

8:19 p.m. – Back at camp (and not on the reward), Ron was happy to be in the company of Gavin, Aurora and Victoria who he hoped to build a game plan with. Ron immediately opened up the conversation about how big of a threat Rick is, which the other three joined in on due to him being a jury favorite. As another sign of trust, Ron gave the extra vote back to Aurora instead of keeping it in his possession.

8:22 p.m. – Meanwhile at the reward, the four winners got the perfect recharge moment with mud baths and hot springs. Rick was with Lauren and Julie, two players he didn’t necessarily want to talk strategy with and so he took the day as pure relaxation. While he and Wardog were showering though, Julie opened up a discussion with Lauren about getting the women together to take out one of the strong men–pointing to both Wardog and Rick as the best options. Julie wanted Wardog out, but Lauren was hesitant to get on board with that, preferring to get Rick out instead.

8:28 p.m. – With Rick, Wardog and Aurora all on the target list, immunity was necessary. In the challenge they each had to maneuver through an obstacle course collecting three buoys to solve a puzzle. Aurora took an early lead after the first stage and maintained that lead through the second and third stages with Rick, Gavin and Julie right behind her.

8:31 p.m. – But as is always the case, the puzzle became the great equalizer and within minutes everyone was working on it at the same time. Rick, Gavin and Aurora were the first to find a rhythm with the puzzle. But when just like that Rick was looking like he had it figured out he got to a place where it wasn’t working out, opening the door up for Aurora. And then he figured out what he was missing and pulled it together quickly for the win!

8:38 p.m. – With Rick having immunity, he was off the table as the option that half of the tribe wanted to vote. That left Wardog vulnerable, being that he was the other “big threat” called out by people. Julie, Victoria, Aurora and Ron all gave the verbal to each other that Wardog would be the vote, but Ron was worried that with Wardog out he would be left as the next biggest target. So with that in mind, Wardog and Ron started working things to find votes to take Aurora out instead.

8:40 p.m. – One of the people Wardog went to for a vote against Aurora was Julie, but she was concerned that he was coming to her too late. Elsewhere Lauren was concerned that no one was coming to her to build a relationship with and that it would leave her in a spot where she didn’t have the strength to get to the end. Aurora also started questioning how loyal Ron was going to be to her, especially considering that Rick and Wardog were avoiding her like the plague all day.

8:48 p.m. – At tribal council Jeff wanted to know how paranoid everyone was acting now that the game was thinning down. Gavin opened up the conversation to discuss Wardog’s attitude back at camp, much to juror Kelley’s glee. With immunity around his own neck, Rick was comfortable addressing the fact that “big targets” have been the ones voted out most in the game, which put Wardog and Ron in the hot seat.

NEXT WEEK: In the hopes of building trust with each other, Ron pulls a fast one on Rick by giving him an expired advantage and then… family visits! Ugh I’m gonna cry, aren’t I?

Here are the answers to Gold Derby’s contest questions for “Survivor” Season 38, Episode 11:

Who will be voted out at tribal council? Dan “Wardog” DaSilva

Who will win Immunity? Rick Devens