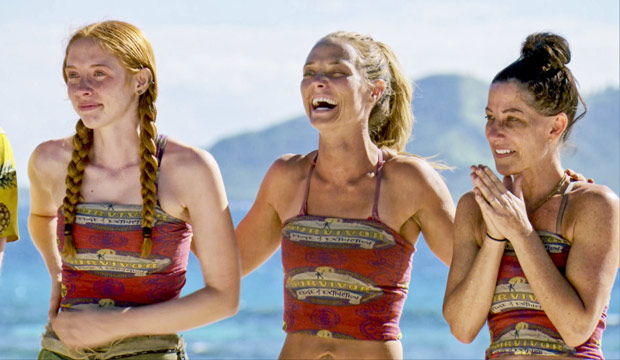 Heading into the 12th episode of “Survivor: Edge of Extinction,” there were only seven castaways remaining: Victoria Baamonde, Ron Clark, Lauren O’Connell, Julie Rosenberg, Gavin Whitson, Aurora McCreary and Rick Devens. All seven had been waiting for the day that their loved ones would arrive on the island, and that moment finally came during the reward challenge. As usual, there were tears both on camera and at home as viewers reached for the tissues in bulk. So who ended up being voted out just two weeks before the season finale?

Below, check out our minute-by-minute “Survivor” recap of Season 38, Episode 12, titled “Awkward,” to find out what happened Wednesday, May 1 at 8/7c. Then be sure to sound off in the comments section about your favorite castaways on CBS’s reality TV show and who you think will ultimately join the “Survivor” winners list. Keep refreshing/reloading this live blog for the most recent updates.

8:00 p.m. – “Previously on ‘Survivor’!” In last week’s 11th episode, the castaways had had enough of Dan “Wardog” DaSilva, so they came together to vote him out with a 6-2 vote over Aurora. The only other person to vote with Wardog was Rick, who now comes into tonight’s episode with an even bigger target on his back. Will the morning news anchor find himself once again returning to Extinction Island, or will someone else be voted out?

8:01 p.m. – Rick is in a “desperate situation” after Wardog is voted out because his closest “ally” left is Ron, but he knows that he’s already went against him twice this season. When the two talk, Ron gives Rick an expired advantage in order to build trust and help him relax, but Ron’s plan is to vote him out next.

8:02 p.m. – For the reward challenge, the castaways were reunited with their loved ones so that the pairs could run the course together–Rick’s wife, Julie’s husband, Lauren’s dad, Ron’s husband, Victoria’s dad, Aurora’s brother and Gavin’s newlywed wife all participated.

8:09 p.m. – The challenge was one last run during “Heroes vs. Villains” where the loved ones and the castaways would toss water from buckets to each other in order to be the first to raise their flag. First pairs to raise their flag would earn a picnic back at camp.

8:12 p.m. – Victoria got winded very early on in the challenge, but she wasn’t the only one–most castaways had a tough time keeping up the pace as they raced up and down the beach to fetch water from the sea. Gavin and his wife found an early lead, but Lauren and her dad were also gathering a fair amount of water with each toss. But then out of nowhere, Ron and his husband squeezed every ounce out of their bucket and won!

8:14 p.m. – Naturally Jeff asked Ron to choose two other players (and loved ones) to “bring with him” on the reward. In no surprise, Ron first chose his closest ally Julie and then Gavin so that he could enjoy a “proper” honeymoon.

8:18 p.m. – At the picnic, all three castaways confessed to their loved ones how badly they can’t wait to return home and be with the people closest to them again. Gavin was very emotional, but Ron was much more focused on discussing the game. He told his husband that he thinks he’s in charge of the game and that he chose Julie and Gavin on purpose so that he could solidify a bond with both of them so that they’d all vote together.

8:21 p.m. – Back at camp later, while Rick was away Aurora and everyone else decided to look through his bag, but Rick came back while she was in there and so he confronted her. The scenario set up a confrontation between the two of them–Rick called the moment awkward, but Aurora denied any wrongdoing and gave off an air of confidence and self-assurance that Rick decided he could use against her with the others.

8:23 p.m. – The confrontation also inspired Rick to actually go looking for an idol, at which point he found a clue to an idol! Instead of going straight out to look for the idol in front of everyone else, he decided that he’d be more stealth about it. He figured out that it’s up a tree in the middle of camp and so it looked like it’d be especially hard for him to get his hands on.

8:27 p.m. – Once night fell Rick found time to make his move for the idol while everyone else was sleeping. It was a close call a couple of times–both Aurora and Gavin woke up to the noise, but didn’t notice that Rick was in a tree right above the shelter. So in the end it was quite easy for Rick to find the idol without anyone knowing!

8:29 p.m. – The next morning the players hit the beach for the immunity challenge. In the endurance challenge they had to balance on very narrow pegs between two walls–the last one up would win.

8:30 p.m. – Immediately Rick tried to cut a “deal” and offered anyone that jumped off a final three deal with him. No one bit (obviously!) and then he became the first to fall. Once he was on the bench he antagonized everyone else, starting with Aurora. The crew made it clear that it was Rick’s time to go and that they’d all be voting him out.

8:32 p.m. – Ron was the next to fall, which gave him and Rick a chance to speak privately on the bench. Rick did not disclose that he found an idol, but Ron did his best to make it seem like he’d work with him. Afterward, Victoria, Julie and Aurora stepped off their perches, leaving Gavin and Lauren to fight for the necklace. In the end it was Lauren that couldn’t hang on and so Gavin won his second individual immunity of the season!

8:37 p.m. – Rick had a good time at camp playing it up as though he knows he’s going home, but Julie and Ron told him that they’d vote against Aurora with him. Once they were no longer with Rick, Julie and Ron told each other that they’d still vote for Rick, but hope that they convinced him to vote Aurora in the off-chance that he does play a real idol.

8:39 p.m. – Elsewhere, Victoria and Lauren joined forces for the first time in the game and decided that they both need each other. They devised a plan where they’d split the votes so that in the situation where Rick plays an idol they’d instead vote for Ron so that he goes home instead of whoever Rick chooses. When they spoke with Aurora about the plan, she admitted to having the extra vote and they decided to give it to Gavin in order to ensure that he’ll be able to use it again on the re-vote (since he’ll for sure be a part of the re-vote).

8:41 p.m. – Because Ron brought Gavin on the reward with him, Gavin was not necessarily comfortable with the plan to go against Ron. The whole thing put Gavin in the middle–knowing that the girls are going for Ron and that Julie and Ron were going for Aurora as the backup plans. But then there was Rick who wanted to test his trust in Ron by using the advantage Ron gave him (it’s fake, remember) and vote with them against Aurora. Are you confused yet? I am!

8:48 p.m. – At tribal council, Jeff Probst immediately opened it up to Rick to discuss how he knew he was tonight’s target. Rick made yet another show of it with his stage and brought up how Aurora was going through his bag. But no one else took his bait and they instead turned the conversation to “plan Bs” that were in the mix and how they’re necessary even when the vote may seem obvious.

8:49 p.m. – When Ron was asked about his decision to bring Julie and Gavin with him on reward, Lauren and Victoria rolled their eyes at Ron’s attempt to kiss up by saying he regretted not choosing them. For Lauren it was “telling” who Ron chose and who he didn’t choose.

8:52 p.m. – During vote-casting, we saw Rick vote for Aurora and Lauren vote for Ron. Then Jeff asked if anyone wanted to play an idol, to which Rick used the advantage menu Ron gave him, but Jeff told him that it expired on Day 9. Once again, Rick made another show of things and pretended to be mad before pulling out his own real idol, earning applause and laughter from the jury. That was a big “ouch!” in Julie and Ron’s direction and then all votes cast for Rick did not count. The votes: , , , , Aurora, Ron, Ron, Ron! And with that vote, more laughter from the jury! That was… a lot of cringe and shock!

NEXT WEEK: Rick remains the target back at camp, but the players on Extinction Island get a surprise package. Will one of them be coming back to the game already?

Here are the answers to Gold Derby’s contest questions for “Survivor” Season 38, Episode 12:

Who will be voted out at tribal council? Ron Clark

Who will win Reward? Ron Clark

Who will win Immunity? Gavin Whitson