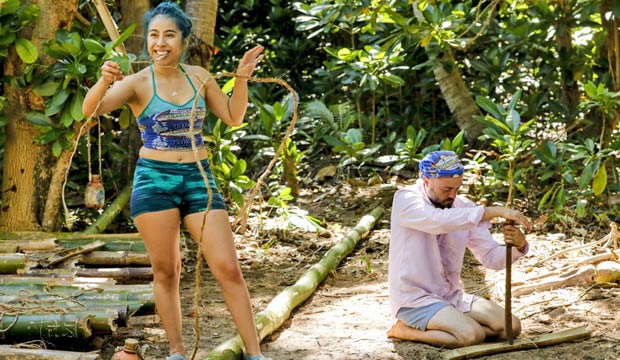 “Drop your buffs!” Those three words instill either fear or elation in every single “Survivor” contestant, and this season’s group was no different. After Jeff Probst made the announcement that the two tribes would become three, how did the new tribal dynamics play out? Did Wendy Diaz really risk her game by letting the chickens loose, as the preview trailer hinted? And who ended up joining Reem Daly, Keith Sowell and Chris Underwood at Extinction Island?

SEE‘Survivor: Edge of Extinction’ contestant Julia Carter is disheartened by her ‘lack of equitable airtime’

Below, check out our minute-by-minute “Survivor” recap of Season 38, Episode 4, titled “I Need a Dance Partner,” to find out what happened Wednesday, March 13 at 8/7c. Then be sure to sound off in the comments section about your favorite castaways on CBS’s reality TV show and who you think will ultimately join the “Survivor” winners list. Keep refreshing/reloading this live blog for the most recent updates.

8.00 p.m. – “Previously on ‘Survivor’!” In the third episode, Manu lost its third straight immunity challenge and had to decide whether it was finally time to vote out Kelley Wentworth. When word got back to Kelley’s buddy Dan “Wardog” DaSilva that her name was on the chopping block, he went to war in ensuring that another big threat — Chris — was the target instead. A blindsided Chris was soon voted out, then easily made the decision to try his luck at the Edge of Extinction. Fifteen players remain. Who will be voted out tonight?

8:01 p.m. – Reem and Keith were very surprised to find out Chris was the next guest at Extinction Island, but they also thought it was a taste of his own medicine. Reem even vowed to not give him a warm welcome, but instead insisted that he’d have to rough it just like they have.

8:02 p.m. – Back at the Manu camp, Wendy was in good spirits after escaping elimination yet again. Inspired by that she decided to return the flint she stole, thinking that people still didn’t suspect her but of course they did. Aside from her allies, David Wright and Rick Devens, the tribe was more than ready to vote her out at their next tribal council.

8:04 p.m. – Upon arriving at the next challenge, the Kama tribe was surprised to find out that Manu voted out one of their strongest players in Chris. But that point was moot once Jeff announced that the two tribes were breaking down and reforming into three new tribes. Miraculously, everyone was swapped to a new tribe that included only people from their former tribe, except for Wendy who was on the new Manu with all former Kama members Aubry Bracco, Victoria Baamonde, Eric Hafemann and Gavin Whitson. The new Kama tribe was all former Kama members: Joe Anglim, Aurora McCreary, Julia Carter, Ron Clark and Julie Rosenberg. And the new third tribe Lesu was all the other former Manu members: David, Wardog, Kelley, Rick and Lauren O’Connell.

8:11 p.m. – On the new Kama tribe Joe found a little hope in that he’d be able to build more solid relationships in the smaller group. He still has Aurora on his side so he needed to pull in a third person to gain majority on the five person tribe. He chose to approach Ron who told Joe that he was for sure with him, but he had already spoken to Julia before that, asking her to go through his bag while he keeps him busy elsewhere. Ron sees Joe as too big of a threat and wanted to make sure that they could safely vote him out without the threat of an idol.

8:13 p.m. – The Lesu tribe felt like they got a lucky draw in sticking together and having a strong group of people for challenges. The only problem is that before they had Wendy as the “odd duck out” that they could easily vote out and so now they’d have to turn on each other. On top of that, they were the new tribe at a new camp and had to start from scratch with their shelter. The toll of the game and lack of food was bringing Lauren down which may have shown the rest of her tribe a bit of weakness…

8:16 p.m. – Wendy welcomed the new Manu tribe with a tour around her camp and Aubry immediately warmed up to her. When Wendy started spilling all the Manu tea to the tribe, Aubry saw her as an asset. One of the most meaningful secrets Wendy confessed was that Kelley was the mastermind at the tribe and that her and David were surely not working together. But once discussion about the Manu chickens started, Wendy got protective of them and at night she set them free so that they couldn’t cook them the next day.

8:19 p.m. – After a storm hit that night, the three players at Extinction Island contemplated what it would mean to raise the white flag of salvation. Keith was the most tempted to surrender, but ultimately decided to stay and bond with Reem over their shared resentment with Chris. For Chris, the journey to Extinction Island was about proving that though he didn’t play the perfect game he envisioned he could overcome it and still make it as far as he could. Part of that was going fishing and catching food for him and the other two, who were grateful. Still, the three of them had no idea how long they’d remain on the island and in what manner they’d have the opportunity to return to the game. They’re just as much in the dark about it as we are!

8:26 p.m. – When Manu woke up the next morning they immediately noticed that the chickens are gone and naturally assumed that the person they knew wasn’t keen on eating them, Wendy, had probably set them free. Later Wendy readily admitted to letting them free and pleaded to the rest of the tribe that they don’t catch them, stating that even being voted out would be better than seeing the chickens killed. Uh…..

8:28 p.m. – For the first immunity challenge as three tribes two of the tribes could earn safety after running a course that included traversing two slippery A-frame slides, lugging a heavy crate across obstacles and then solving a slat puzzle. Lesu had significant trouble on the first slide, but managed to close the gap on the second and all three tribes advanced to the crate-pull, finished it and then reached the final puzzle stage at the same time. Eric and Aubry took lead on the puzzle for Manu, Kelley and David for Lesu and Ron and Joe for Kama. At some point Wendy swapped in for Aubry, but by then Joe and Ron had finished for Kama, earning the first immunity idol. In a scramble between the other two tribes, Wendy’s help proved valuable and they edged out Manu, meaning one of the other former Manu members (not Wendy) would be the next voted out.

8:39 p.m. – The dejected Lesu tribe returned to camp in the rain and was forced to settle into the reality that they’d have to vote one among themselves out, adding to the original Kama slaughter so far in the game. Rick and David both promised to not vote each other out and considered, again, Kelley as the most person they want out of the game. But David was convinced, with no evidence, that she has the idol and so they turned their heads toward Lauren who was already feeling down and out. Elsewhere, Kelley and Lauren both vowed loyalty to each other and thought that Rick was their best option to go after.

8:41 p.m. – Wardog was left in the middle with a decision to make between voting out the weaker Lauren or the more dangerous Rick. For most of the afternoon everyone was making their pitches to Wardog about how he should vote. The swing vote position felt comfortable to Wardog and so he was happy to be able to make the decision with this vote about who his “dance partner” would be for the rest of the game.

8:48 p.m. – At least Lesu wasn’t taking their predicament too seriously once they arrived at tribal council. Rick and Lauren both seemed to know that it was their names on the chopping block while vets Kelley and David were feeling safe. When asked about how their tribe is feeling, Kelley got emotional on behalf of everyone saying that though it was still just a short time they all felt really close to each other and that wouldn’t change even once one of them was voted out.

8:54 p.m. – Expectedly we got to see David vote for Lauren and Lauren vote for Rick, setting up Wardog as the the swing vote. When jeff asked if anyone wanted to play their idol, Lauren decided not to use hers and so the votes were read: Lauren, Rick, Lauren, Rick, Rick. Wow! Lauren made the right decision and didn’t waste her idol! So it looks like David comes up short this time and Wardog has drawn the line in the sand, choosing his alliance with Kelley over his with David, at least for now.

8:56 p.m. – With the choice of Extinction Island in front of him, Rick made the easy and quick decision to get in the boat and head to the island where he’d meet Chris, Keith and Reem next week.

SEE‘Survivor’ 38 power rankings: Maybe the vets aren’t as doomed as we thought — David Wright, Aubry Bracco rise to the top

Here are the answers to Gold Derby’s contest questions for “Survivor” Season 38, Episode 4:

Who will be voted out at tribal council? Rick Devens

Who will win Immunity? Kama and Manu