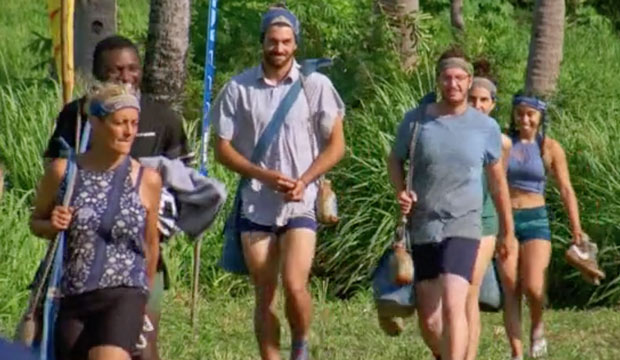 “Come on in!” With those words in Wednesay’s highly anticipated merge episode, Jeff Probst introduced the remaining 12 players of “Survivor: Edge of Extinction” to one of the biggest twists in the history of the reality TV show. The first six castaways who were voted out of this 38th season — Reem Daly, Keith Sowell, Chris Underwood, Rick Devens, Aubry Bracco and Wendy Diaz — then walked out into the arena and competed in a challenge, with the winner getting the honor to return to the game. So how did it all play out?

SEESorry, returnees! The winner of ‘Survivor: Edge of Extinction’ will be Eric Hafemann or Victoria Baamonde, predict readers

Below, check out our minute-by-minute “Survivor” recap of Season 38, Episode 7, titled “There’s Always a Twist,” to find out what happened Wednesday, March 27 at 8/7c. Then be sure to sound off in the comments section about your favorite castaways on CBS’s reality TV show and who you think will ultimately join the “Survivor” winners list. Keep refreshing/reloading this live blog for the most recent updates.

8:00 p.m. – “Previously on ‘Survivor’!” In last week’s two-hour episode Aubry was voted out with two advantages in her pocket, then Wendy soon followed her when two tribes went to tribal council to collectively vote out one person. Over at Extinction Island, Chris found an advantage in the form of bamboo rods that he could use to practice for the upcoming challenge, while Keith found a punishment of extra knots that he promised to give to Chris. Who else is super excited for tonight’s episode? Let’s go!

8:01 p.m. – Jeff Probst announced that the tribes had officially merged! But wait. What’s that around the corner? Reem, Keith, Chris, Rick, Aubry, and Wendy entered the challenge at Jeff’s command, sending shockwaves among the remaining players. Jeff announced that one of the six eliminated players would win their spot back into the game today. The challenge involved a race through a series of obstacles, and at the finish, maneuvering a ball to the top of a very long trap. Keith had the advantage of giving someone the disadvantage of having to untie 30 knots in the challenge, giving it to Chris.

8:04 p.m. – During the challenge, Chris got out to an early lead, but Aubry quickly passed him and got to the final stage of the challenge. Chris hit the obstacle of having to untie the knots as Aubry, Rick, and Wendy maneuvered their balls upward. As Wendy moved her ball, she struggled to overcome her Tourette’s. Keith then joined the rest of the group at the end, with Reem the only one truly out of it. Rick emerged and managed to successfully get his ball through the ball at the top, meaning he got to return to the game!

8:17 p.m. – The merge tribe arrived back at camp. Julia Carter was thrilled because they had a strong Kama majority. Rick was hoping the tribe would give him a chance this time. Julie Rosenberg said she was rooting for Rick and formed a connection a fast connection with him.

8:20 p.m. – Keith and Wendy decided to raise the sail together on Extinction Island, meaning their time in the game was over. And then there were three: Reem, Chris, and Aubry.

8:21 p.m. – Kelley Wentworth was feeling stressed about being in the minority alliance. She decided she needed to make a sales pitch to Joe Anglim. Joe divulged to Kelley that he didn’t feel comfortable with most of his Kama alliance mates. Kelley felt confident that Joe would go with her and the rest of her Lesu alliance. All of the women congregated together and discussed voting out Rick as an easy scapegoat. Julie was not liking this, saying Kelley and Lauren O’Connell were a little too heartless in this kind of a revolving door scenario. She said maybe one of them needed to go next instead.

8:27 p.m. – Rick discovered something new in his bag. He whisked away into the woods and found an Idol broken in half, with a note stating that it cannot be used at the coming Tribal Council. He also had to give half the Idol to someone else. After that point, the Idol gains full power and becomes a regular Hidden Immunity Idol. He decided that night to share the information with David, who was his closest ally before he was voted out.

8:30 p.m. – It was time for the first individual Immunity Challenge of the season. Jeff unveiled the gorgeous Immunity necklace and revealed the challenge: Each castaway stands on a narrow beam while balancing a statue. At regular intervals, they were to move further down the narrow beam, until only one castaway remained. Ron Clark and Gavin Whitson quickly dropped their statues. Dan “Wardog” DaSilva dropped next, followed by Rick, Victoria Baamonde, and Aurora McCreary. After they moved further down their beams, Kelley dropped her statue. After 20 minutes, David Wright, Eric Hafemann, Joe, Julie, Julia, and Lauren remained. Further into the challenge, Eric, Julia, and David were out in quick succession. All three were steady after 40 minutes, and then Joe dropped his statue out of nowhere. Lauren then dropped out, meaning Julie was the first individual Immunity winner of “Survivor: Edge of Extinction”! A huge accomplishment for the oldest woman left in the game.

8:40 p.m. – Julie was feeling confident now that she had Immunity. She told Victoria they should secretly try to get out Kelley, and told Rick that he will be safe tonight, even though most of the tribe intends to split the vote between David and Rick. Ron and Joe had a conversation, where Ron felt uneasy about Joe’s vagueness in figuring out who to vote out. Ron said he wanted to take out Joe now, telling Victoria the Kama six (Ron, Victoria, Eric, Gavin, Julie, and Julia) should blindside him. The rest of the Kama group was uncertain about taking out Joe so soon.

8:50 p.m. – At Tribal Council, Aurora, Joe, Julie, Julia, Ron all got their torches. To everyone’s surprise, Jeff called for the jury to come in, with Reem, Chris, and Aubry entering. We’ll see if they actually stay jury members? Perhaps they are relying on more people raising the sail, but this seems like a large, unwieldy jury otherwise. There was a discussion about making Rick the easy vote-out, with Victoria saying there are bigger threats in the game. Joe took umbrage with this, noting that he is a big physical threat.

8:55 p.m. – The tribe cast their votes, and nobody played an Idol. Rick, Kelley, David, Rick, David, Kelley. Two votes among all three. Another vote for David. Then, suddenly, a slew of Joe votes! Joe is out of the game, presumably at the hand of the Kama six. When Joe arrived at the signposts, he decided, of course, to stay in the game. Joe is off to Extinction Island! Is he going to Ozzy Lusth in “Survivor: South Pacific” his way back into the game? Probably! Until next time…

Here are the answers to Gold Derby’s contest questions for “Survivor” Season 38, Episode 7:

Who will be voted out at tribal council? Joe Anglim

Who will win Immunity? Julie Rosenberg