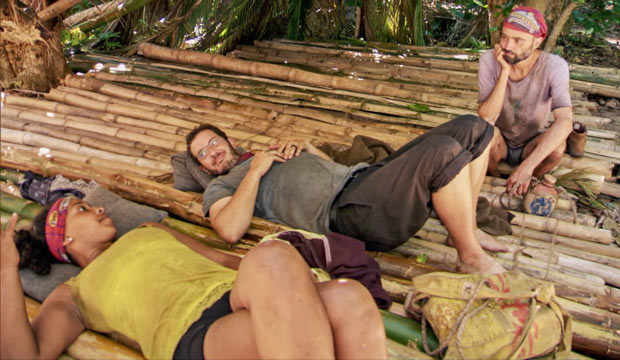 Heading into Wednesday’s episode of “Survivor: Edge of Extinction,” host Jeff Probst said that it would feature one of the “craziest” tribal councils ever. Was he exaggerating, or will this one go down in the “Survivor” record books? With only 11 people left in the game, plus five at Extinction Island, alliances crumbled following last week’s shocking blindside of Eric Hafemann. So who followed Eric out the door this week?

Below, check out our minute-by-minute “Survivor” recap of Season 38, Episode 9, titled “Y’all Making Me Crazy,” to find out what happened Wednesday, April 10 at 8/7c. Then be sure to sound off in the comments section about your favorite castaways on CBS’s reality TV show and who you think will ultimately join the “Survivor” winners list. Keep refreshing/reloading this live blog for the most recent updates.

8:00 p.m. – “Previously on ‘Survivor’!” In last week’s eighth episode, Eric was completely blindsided when his Kama alliance turned on him. Only three people weren’t in the loop — Ron Clark, Julie Rosenberg and Rick Devens — which means they have a lot of work to do to make sure they last another three days on the island. Who will become the sixth inhabitant of Extinction Island tonight?

8:01 p.m. – Following last week, things are looking up for Dan “Wardog” DaSilva who feels like he, Kelley Wentworth and Lauren O’Connell are now in control of the game. Ron was left in the dark and feels like he lost all of his power, but his former ally Gavin Whitson doesn’t regret the move considering how Ron was keeping him in the dark about his future plans. Gavin confirmed a new alliance of six with Lauren, Wardog and Kelley along with Victoria Baamonde and Julia Carter.

8:02 p.m. – Things were much more up in the air for David Wright and Rick who had split their own votes between the two alliances last week and vowed to repair that this week with Ron and Julia in order to figure out a way to regain power going forward.

8:04 p.m. – At Extinction Island, new inhabitants Eric and Joe Anglim were both contemplating raising the flag of surrender to leave the game. For Joe he was concerned that the other players were definitely staying and so it was a question of what the chances are that they can get back into the game. Eric had a much tougher time, but Chris Underwood bringing in some stingray to eat helped convince him to stay a little longer.

8:07 p.m. – Being left out of the vote against Eric was worrisome for Julie who for the first time felt on the outside looking in. It created an emotional moment for her, someone that had seemed so strong this whole time, because she was lacking support to help her feel secure given the circumstances. But with David, Rick and Ron she was part of a conversation to help shift the game back in their favor and they considered approaching Wardog to work with them for a vote.

8:09 p.m. – On the other side of things, Julia and Gavin discussed what it means for them to be in a trio with Victoria that is working with another strong trio in Wardog, Kelley and Lauren. They see it as coming to a head at some point where the trio that brings in a fourth to have numbers over the other is going to come out on top.

8:13 p.m. – The immunity challenge came early in tonight’s episode, setting the players on narrow beams where they’d balance a ball on a wooden bow and try to be the last one standing. Gavin and Rick both had movement on their bow very early into the challenge, but managed to course-correct and maintain their control. Instead it was Wardog who dropped first and then Julie–the other players all advanced to the second stage where they’d move to a smaller part of the beam.

8:17 p.m. – In the second stage, Ron, Rick, Aurora, Victoria and Lauren all dropped quickly, leaving only four to compete, including David who ran this challenge in his previous season (and didn’t do very well). When Kelley fell, David was left against Julia and Gavin, two players that are gunning to eliminate him next. After Julia dropped it became a battle between the guys, but once again Gavin got unsteady and looked like he would be out until David also saw movement and couldn’t keep it under control. Gavin won!

8:25 p.m. – As soon as everyone got back from the challenge, the players started scrambling to discuss in small groups how they’d vote. One group that got together was Rick, David, Julia and Gavin who threw around the idea of breaking up the Wardog, Kelley and Lauren trio. That trio was having their own conversation about needing to get Ron out before David so that they could potentially use David in the future rather than leaving Ron available to the Kama members to use.

8:27 p.m. – When Lauren optioned Ron to Julia it made Julia want to get rid of Kelley instead of any of the Kama members, reuniting the Kama members to work together again. Victoria called it “getting rid of the queen bee” and Ron, for once, sat back and let the others take the lead in the decision making… at least superficially. Julie was more paranoid about whether she could trust the younger Kama members and so she looked for a way to make her own move in the game. Later, Gavin was frustrated about the Kelley vote because he preferred getting David out and so another fracture showed itself.

8:30 p.m. – For David and Rick they knew one of them would have to use their joint idol tonight, but they weren’t sure about which of them they needed it for. Later, Kelley also got paranoid because of the way Julia, Victoria and Aurora were avoiding her at camp. Like David, she took that as a plan against her being in motion and so she was forced to consider playing her idol, too.

8:31 p.m. – There’s 30 minutes left in the episode and they’re heading to tribal council…. OMG. I’m drooling for the drama incoming.

8:36 p.m. – Tribal discussion began with a conversation about the nature of blindsides. It was explained that some people need to be left out of the decision in order to protect the decision, but Aurora’s comment in that regard triggered both Kelley and Wardog who felt like it meant they were used temporarily which would put them on the wrong side of things tonight.

8:38 p.m. – Rick called Julia, Gavin, Victoria and Aurora out for “intentionally letting the clock run out” on getting back to him about how they’d vote tonight. Then once again Julie started crying out of the frustration with being left in the dark about tonight’s plan. During that freakout, Kelley tried confirming with Julia that they’re “good,” to which Julia said “yes.” Obviously Jeff called that out, which opened a new discussion about who Julia is actually going to work with tonight.

8:42 p.m. – Eventually Rick decided it’d be a good idea to float the concept of the five Lesu members joining with Ron and Julie in order to work together as 7 against the 4 younger Kama members that were clearly sticking together. This created an atmosphere of a “live” tribal where people’s votes could change at the drop of a hat. Wardog and Rick started discussing voting out Aurora while Kelley started whispering with Aurora. Kelley wanted to confirm with the Kama members again. Victoria was the only Kama member to infiltrate the Lesu/Ron/Julie group and so they started discussing Julia or Aurora. Meanwhile David got Kelley to admit that the plan was to vote David out. Julie once again lost it and kept yelling at the Kama members that she is “ready to jump ship” and would rather be at the bottom of a Lesu group than the bottom of the Kama group. Commercial break….

8:51 p.m. – Once things settled down, Ron and Julie got to whispering which likely became the lynchpin of the vote. Ron’s final move was to speak to Gavin and then it was time to vote. With three idols available to be played, only Rick and David played their halves… for David. The votes: David, Kelley, Julia, Julia, Julia, Julia, Julia, Julia. So, Rick’s move made a huge difference and now and it seemed like some of the Kama members voted her out, too? Maybe Gavin? And Kelley and Lauren still keep their idols a secret! Incredible.

9:00 p.m. – Yep! In seeing the votes, both Victoria and Gavin voted Julia out so it looks like their decision to actually get up and join the “live” tribal discussions saved them from being one of the names optioned for the vote. Of course Gavin had immunity, but he knew that if his little foursome was going to go down that he’d need to work with the rest of the players to give him a chance going forward. I love it.

Here are the answers to Gold Derby’s contest questions for “Survivor” Season 38, Episode 9:

Who will be voted out at tribal council? Julia Carter

Who will win Immunity? Gavin Whitson