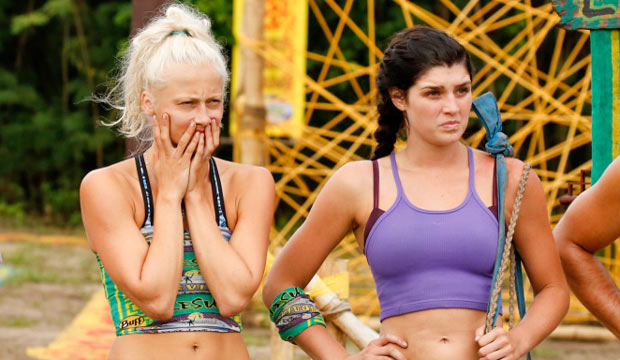 The brick wall Kama alliance took a tumble on “Survivor: Edge of Extinction” this week, upending what was beginning to look like a straight shot to the final tribal council for would-be frontrunners Eric Hafemann and Ron Clark. Eric was sent to Extinction Island by members of his own alliance and Ron, Julie Rosenberg and Rick Devens were left to pick up the pieces. The move benefited most Lauren O’Connell and Kelley Wentworth who have been the de factor targets for the last few weeks.

Lauren and Kelley have been in a tight two-person alliance since the start of the game and still each hold on to a hidden immunity idol. The shift in power among the Kama six gives them both an in-road in a group of players that had previously walled them off. Check below for my updated power rankings that see Ron and Julie take a huge fall eight spots from the top of last week’s list.

Victoria, Gavin and Julia took the game into their own hands this week when they disrupted Ron and Eric’s plans to remain in the Kama alliance long enough for them to switch things up on these three with the help of Rick and David. Though Julia was the one that kickstarted the turning of the tides, I thought Victoria had the most level-headed response to the situation. Unlike Gavin and Julia who it seemed were just concerned with proving that they made a big move in the game, Victoria was hesitant about the move at first and took her time to decide whether or not it was the right time to do it.

The problem that these three are going to run into is that they’ve put themselves at a bit of a disadvantage in the long run if a couple things happen: 1) Aurora is a wildcard and has said she is going to just follow the numbers as long as she can. How long will she stick with these three and make it a 4-person voting block rather than a 3-person one?; 2) David, Kelley, Lauren and Wardog can become a solid 4-person voting block of their own that will at best match them. At worst, these four will pull in Aurora and have a 5-person group to outnumber the Kamas completely. But, as we know, the relationship between David and Kelley is strained, so whether or not the Manu members actually stick together is something only time will tell.

It’s kind of crazy how much of a rollercoaster this season has already been for the original Manu members. Last week they got their first major break in the competition and now could find themselves with more power next week if things fall into place the way they need them to. David is playing a really great, low-key game and so I can’t help but give him the advantage among this group, but Lauren and Kelley have played (or not played, rather) their hidden idols to perfection so far. Both of them have been on the chopping block with votes cast against them while in possession of the idols, but they have managed to keep their cool and hold on to them for future use. Remember that as the numbers dwindle down their idols gain power. But even with her idol, Kelley continues to be named as a major threat to everyone else, including David. Wardog is a wild card with a weak edit so I don’t have much faith in him, despite being the catalyst for Kama mutiny this week.

Julie and Ron take a huge tumble in the power rankings this week because I’m just not sure how they’re going to crawl their way out of this hole. No one is worse off than Ron, who basically escaped the last tribal by the skin of his teeth because I think it was likely a toss-up between him and Eric for the vote. Prior to this week he was spear-heading a lot of the decision-making in the Kama alliance and it ultimately rubbed the rest of the members the wrong way–they’re unlikely to want to work with him again. Julie, I think has a better relationship with the Kama members that turned and she was probably just left out of the decision out of a concern that she might tell the guys about it.

Rick and Aurora are in more interesting positions going forward, but both of them have a lot of work to do to find themselves in a place of power. For Rick, who once had power, the struggle will be harder because he turned his back on the Manu members in order to “go with the numbers” but those numbers failed him and now he’s at the bottom and outside of Manu’s good graces. For Aurora, she’s never had power and so her decision to just go where the power lays is smart, but it’s only going to get her so far. I have no idea how long she’ll stick with the younger Kama members, but I do know that after her begging for immunity while Lauren was passed out on the ground rubbed Julie and others the wrong way she’s probably going to have a hard time finding strong allies. Her threat level is so low though that she should be safe for a little bit.

I don’t think Eric makes a very intriguing addition to Extinction Island and is instead destined to be one of many once powerful Kama alliance members on the jury. Instead, the big change here this week is Aubry who continues to show an incredible amount of willpower as well as a strong drive to make the most of her time in Extinction. She managed to outsmart the rest of the outcasts in order to find the challenge-practice and vote-add advantage so clearly her head is in the game. Still, though, I think Chris has a strong edit for a newbie and remains the frontrunner to win whatever challenge they’ll all face in order to re-enter the game.