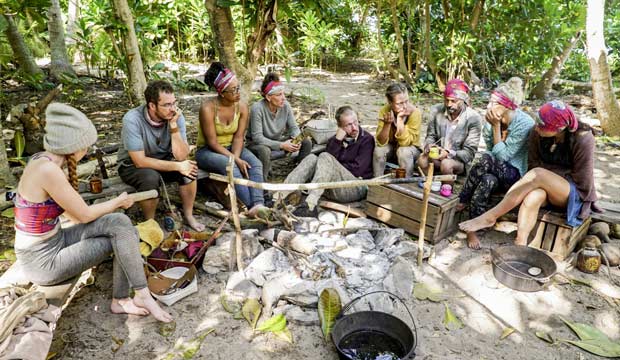 Post-merge on “Survivor: Edge of Extinction” the scores are 2-2 among the vets (Joe Anglim and Aubry Bracco are “out” while Kelley Wentworth and David Wright are still “in”) and 7-5 in terms of original tribes. The Kama members continue to dominate the game and maintain a majority over the five Manu members struggling to survive, but David and his ally Rick Devens, the first to return from Extinction Island after last week’s challenge, have found a relatively safe spot in the middle of the game where they have an idol between them, a positive edit from producers and the favor of Julie Rosenberg, this week’s most powerful player.

Can Rick and David stay safe long enough to infiltrate the Kama alliance and what will become of their fresh bond with Julie? Do I smell a final three?! Check below for my updated power rankings with changes from Kevin Jacobsen‘s list from last week. Thanks for covering, Kevin!

As of now the original Kama six (everyone here minus Aurora, even though she’s also original Kama, LOL) are still in complete control of the game. Their decision to oust Joe last week doesn’t necessarily sit well with me because they’ve opened the door to a possible scenario where the other 6 players (this would include Aurora) could match them at 6-6. In any season it’s a bad sign when a dominant alliance jumps at the chance to prematurely turn on their own, but they also did this two weeks ago when Eric, Victoria and Gavin took out Aubry instead of Wendy and that worked out well for them. My guess though is that this worry will all be moot once they pull Aurora back in to the Kama alliance and use her as a goat as long as they need to. Because we’ve seen absolutely no footage of Aurora building bonds with anyone else in the game I have no reason to suspect that the other side would successfully pick her up anyway. The same, sadly, goes for Julia who has also been edited like a goat, but is securely within the alliance.

That leaves the other 5 wrestling for control of the alliance. In last week’s merge episode I give the advantage to Julie who dominated in the first individual immunity challenge and spearheaded the efforts to not immediately eliminate Rick upon his return. Victoria and Ron were also instrumental in the strategy within the alliance which put both Eric and Gavin in the backseat for once. It’s possible that we overestimated Eric and Gavin early on, but I have my eyes on Julie and Victoria going forward because I think they are the ones that will get the most attention as big threats when players start thinking about who they want to sit next to at the end.

Welp now they have an idol! Seriously, Rick and David are managing to play this incredibly low key, under the radar game that no one is noticing and grows increasingly dangerous to us with every passing episode. David continues to get a ton of footage in the edit and overall has appeared as likable this time as he was in his original season. And Rick isn’t lacking in positive screen time either–in fact, I think he’s getting a better edit than David! With their new idol the two of them have a little more control over their fate and once they inevitably turn Kama’s sights toward Kelley and Lauren should manage to get to a point in the game where they are the swing votes. That swing vote position is going to be very important to the end game for the Kama players, especially Julie who already found a connection with Rick who she worked hard for this week. A Julie-Rick-David final three deal is not that wild of a prediction, right?

SEE‘Survivor’ 38: The real reason Keith had a beef with Chris? Lord knows, it wasn’t because he grabbed the advantage

It truly breaks my heart to rank Lauren so low because I honestly think she’s playing an incredibly smart game. The problem is that her gameplay is choked by the early underperformance of Manu and so her pathways to the end are very narrow. That being said, she’s shown smarts in her reservation of playing her idol, as has Kelley, and with two idols between the two of them they could actually do some damage to the Kama alliance. My hope is that they’re able to work with Rick and David, which would give them three idols, but that relationship is so strained that I doubt it. Wardog is a mess and I don’t even know what to say about his game which peaked at his decision to get rid of Rick instead of Lauren three weeks ago. Ultimately he showed his hand too early in the game and will have a tough time getting anyone to trust him long enough to make a deep run.

Okay, so Kevin and I were wrong that Reem would be one of the first to quit Extinction Island and now it actually looks like she’s likely to stay there through to the end–especially now that it’s clear everyone who stays is part of the jury! But even if she stays, the chance of her beating Chris, Joe or Aubry (or anyone coming after them) at a challenge is slim to none. She will probably be one of my favorite jurors though! As for the Extincters that have a shot at returning, I still give the edge to Chris because he’s still getting a lot of positive airtime in the edit. Again last week we got to hear him talk about how he wanted to play a perfect game and his journey to come to terms with not achieving that. I think we’re being set up for a minor redemption arc that will see him return to the game near the end–but, of course, not actually win. I will haaaaaaaaate it if someone returns to the game and actually wins!