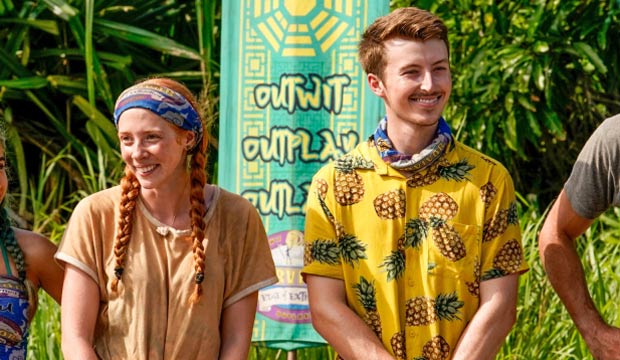 Following one of the liveliest and most frantic tribal councils in series history, “Survivor: Edge of Extinction” has become incredibly unpredictable. A few weeks ago it looked like the original Kama alliance was going to bulldoze through the entire competition, but then they cracked and now they’re demolished. After losing five of their numbers in the first five weeks, the original Manu tribe has somehow remained in the game to this point where they match the original Kama in a 5-5 split. But that isn’t saying much considering how fractured both sides are. Inside the group of 10 are four power pairs, closely aligned to one another, but with relationships to the other pairs so strained that there’s no telling how they’ll combine to decide the next vote.

With Wardog and Aurora floating around in the middle, the table is set for another wild scramble among the power pairs. Can Victoria and Gavin escape the association they had to Julia Carter‘s over confidence and will Ron and Julie let bygones be bygones to bring old Kama back together again? And where does the tension between David and Kelley go from here when they’ve been quietly gunning for each other all season? No wild shifts in the power rankings this week, but considering last week’s #3 was sent home you might want to take this week’s with a grain of salt.

1. Victoria Baamonde (even)
2. Gavin Whitson (even)

In the giant frenzy that was last week’s tribal, I’m most impressed by Victoria and Gavin’s shrewd game play. Though he was already safe with immunity and she has strong personal connections, Gavin and Victoria didn’t just sit back and let the rest of the players discuss among themselves which of the Kama members they’d vote out. Instead they got up and included themselves in the discussion with former allies Ron and Julie, effectively taking their own names off the table and leaving it up for a decision between Julia and Aurora. And yet it was more than that because in joining with everyone else to vote out Julia they laid the groundwork for future votes, where they can make a case for trusting Ron and Julie again or for working with, say, David and Rick instead. Overall I think these two have been insightful, smart and patient with their strategy and are thinking long term when others are forced to think short term.

SEE‘Survivor’ sneak peek video: David has no regrets about wasting hidden immunity idol — ‘It was the right move’ [WATCH]

The David and Rick pairing has evolved into something really interesting–in being at odds with one another in the last few weeks over which side of the game to play on they showed that they are more than willing to play on their own when it comes down to it. In fact, this is actually something they agreed upon very early on in their partnership–that they’d stay together until the point where they have to vote the other out–and is a very honest way to play as a pair, but that it came to a head sooner than they thought is what I find interesting. Both of these guys want to be the top dog and are working really hard to be in that position. They also have great edits, strong connections with other players and haven’t done so much backstabbing that they’re incapable of winning. Where their game falls short of, say Victoria and Gavin’s, is that they’re having to play day by day rather than successfully planning for their future. I also really didn’t like their decision to waste an idol no one else knew about. When all is said and done there has been too many hiccups in their game so far to call them frontrunners, and yet ultimately they both stand a great chance of getting to the end–even together!

SEE‘Survivor’ video recap: It was ‘hard to keep track’ of tribal council in episode 9 — Why eliminate Julia and not Aurora? [WATCH]

Ron and Julie managed to make a real splash with all the chaos of the last tribal council, but are unlikely to come out of it with any real sense of power in the game. And, actually, Julie knows how powerless she is at this point. The best thing they did was gear the conversation toward the three younger Kama members that had betrayed them, essentially setting up the current even-playing-field scenario where there are four pairs and two outliers left standing. But they’ve also pushed the game to a 5-5 split between original tribal lines, blurred as those may be, and so even as the apparent swing votes they are no more secure than anyone else going forward.

I want Lauren and Kelley to be the final two so badly, but deep down I know that’s never going to happen. Every week I’m impressed by their decision to not use their idols because they’ve both been on the chopping block at almost every tribal council they’ve attended. Furthermore, no one else even knows they have an idol and at this point probably assume they don’t because they haven’t used them yet. The clearest way to explain how cool and collected these two women are about their idols is how David/Rick jumped at the chance to use theirs the second they realized David would be getting even a single vote. I mean, it had to be clear to them after that wild tribal that Julia or Aurora was likely going and yet they still wasted their idol. With 10 still alive, Lauren and Kelley have a long way to go before their idols actually make a dent in the game, but I’m hopeful that they’ll continue to play smartly and that when they do use them that it’ll knock one of the frontrunners down a peg or two.

These two couldn’t be playing any more differently from each other than they already are and yet both seem to be in the same position. Wardog, bless him, is trying as hard as he can to be a master manipulator, pulling strings wherever he sees them and coaxing the game in his favor as much as possible. Unfortunately he has very few options in terms of a strong alliance and so he’s always going to come up short when it comes to endgame negotiations. Polar opposite from him is Aurora who is trying to be as lowkey as humanly possible, willingly stepping into a goat position. That she just sat there while every other player in the game debated whether or not to send her or Julia home speaks volumes about both her lack of care and her sense of security in that goat position.

Okay, let’s not beat around the bush–it’s incredibly embarrassing that Eric would arrive at Extinction Island and a day later already by at the edge of quitting. Like, Reem has been there for weeks and already lost her first chance to re-enter the game (along with the others) and still isn’t quitting. Aside from Eric falling to the very bottom because of his weak will, not much changes here. Julia doesn’t add too much excitement to what already feels like it will be a battle between Chris, Aubry and Joe for who returns to the game–those three have had the most airtime and bring the biggest character arcs to the season.