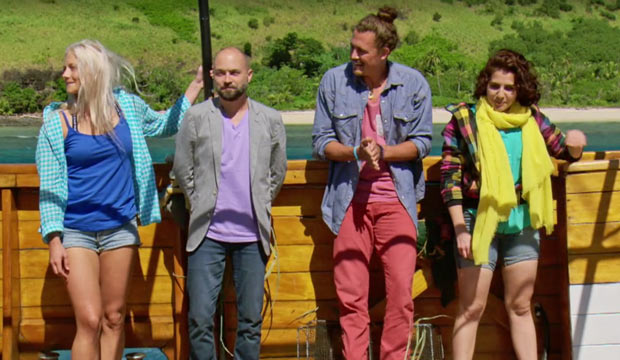 They knew what they were getting into. They figured they would have huge targets on their backs. But the quartet of returning  “Survivor” veterans — Aubry Bracco, Joe Anglim, David Wright and Kelley Wentworth — too often let their guard down when it came to the other less-experienced players, who have blindsided all four of them at tribal council after the 10th episode of Season 38.

But they still might get a second chance after choosing to spend some time on the purgatorial Extinction Island. One newbie player, Rick Devens, already re-entered the game after winning a challenge opposite other residents of the forbidding oasis after the tribal merge. Just achieving that feat helps him to become one of the front-runners. The joke-loving TV news anchor has a great social game and has pretty much made smart choices since returning to the game — even winning an immunity challenge this week. But let’s run down how the veterans each managed to make mistakes before deciding to voluntarily land on the beaches of  Extinction Island with hopes of a another chance:

*Aubry Bracco: The returning player from “Survivor: Kaoh Rong” (runner-up) and “Survivor: Game Changers” (fifth place) was voted out on episode 5 with not one, but two advantages in her pocket — a hidden immunity idol and an extra vote. Both became null and void the minute she landed on Extinction. She was blindsided by her Manu tribe mates, especially Victoria Baamonde who made her believe that they were part of an all-girl alliance and would vote out a guy. Since then, Aubry sent an extra vote advantage that she received on the deserted isle to Aurora McCreary, who gave it to self-declared puppet-master Ron Clark this week. Will she get it back? Who knows? But at least Aubry has an ally in Aurora, who is still in the game.

*Joe Anglim: “Joey Amazing,” who previously competed “Survivor: Worlds Apart” (10th place) and “Survivor:  Cambodia — Second Chance” (eighth place), is a self-declared beast when it comes to winning tribal challenges. But his social game was not quite up to snuff  this time and, as far as I know, he has never ever found a hidden idol in any of his seasons. His tribes use him to win immunity for the group, but after the merge, his physical strength, outdoorsy know-how  and likability factor transform into liabilities. Before he got voted out, Joe spent most of his time painting a flag for the new Vata tribe when he should have been talking strategy with Ron of the former Kama tribe. His final words after he earned five votes? “I made a mistake.” Since he landed on Extinction Island, he has mostly been under the radar and not much of a threat.

*David Wright: The vet who placed fourth on “Survivor: Millennials vs. Gen X” was just on the wrong side of the majority this week and got voted out during this week’s first tribal council. He should have tried a little harder during the individual immunity challenge to keep that vase full of water in the air. As he took the path to Extinction Island, he vowed to the other players, “I’m going to crawl my way back.” He already found an advantage on Extinction, which he sent to his bro-buddy Rick Devens, who used it to his benefit by gaining individual immunity in the second half of the episode.

*Kelley Wentworth: After having played on “Survivor: San Juan del Sur — Blood vs. Water” (14th place) and “Survivor : Cambodia — Second Chance” (fourth place), she should have known better than to let that immunity idol stay in her pocket. As the last returnee standing, she should have known that she would be in danger of being voted out during the episode’s second tribal council once David was sent packing. It is hard to say if Kelley has the right stuff to make it back into the game. She is strategically smart, but never was one to do well in immunity challenges. However, she did make one major move when she landed on Extinction — she announced that not only did she leave with an idol unplayed, but that Lauren O’Connell — her closest ally still in the game — has an immunity idol to use.

So which of these familiar players has the best chance to get back into the main event again? Take our poll below and let us know in the comments why you think either Aubry, Joe, David or Kelley could surprise everyone with an amazing comeback.