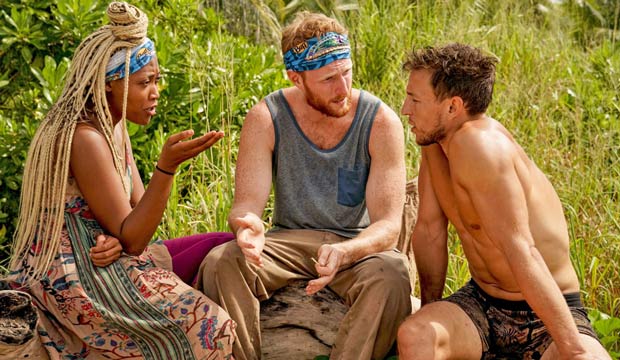 After last week’s two-hour episode of “Survivor: Island of the Idols,” only 11 castaways were still in the running to win the $1 million prize. Six of those came from the original Lairo tribe (Elizabeth Beisel, Missy Byrd, Dean Kowalski, Aaron Meredith, Karishma Patel and Elaine Stott), while the other five were original Vokai members (Lauren Beck, Janet Carbin, Noura Salman, Tommy Sheehan and Dan Spilo). According to Gold Derby’s racetrack odds, Dan and Karishma were most in danger of being sent to Ponderosa in this week’s double elimination episode. Were they right?

Below, check out our minute-by-minute “Survivor: Island of the Idols” recap of Season 39, Episode 10, titled “Two for the Price of One,” to find out what happened Wednesday, November 20 at 8/7c. Then be sure to sound off in the comments section about your favorite castaways on CBS’s reality TV show and who you think will ultimately join the “Survivor” winners list. Keep refreshing/reloading this live blog for the most recent updates.

8:00 p.m. – “Previously on ‘Survivor’!” In last week’s merge double header, a misconduct allegation took over the narrative as Kellee Kim talked with the other girls about feeling uncomfortable being touched by Dan. Unfortunately for everyone involved, Missy and Elizabeth used Kellee’s accusations against her as part of their games, riling up Janet in the process who voted for Dan despite actually liking him. After Kellee’s elimination, all hell broke loose as Janet felt betrayed by the women she was trying to protect. In the end Jamal Shipman followed Kellee out the door as the next member of the jury. Which two castaways will be voted out tonight?

8:01 p.m. – The previous tribal council was particularly rough for Janet, leaving her feeling like a free agent going forward in the game, but also at the top of the chopping block to be the next voted out. But a torrential downpour overnight left everyone in the game feeling out of sorts the next morning and, frankly, “over it.” Karishma’s complaints further isolated her socially from the rest of the tribe, adding to their annoyance that she was no help around camp and isn’t deserving of still being in the game.

8:04 p.m. – Karishma was aware of her place at the bottom of the tribe and especially as the “goat” people were using. While out collecting coconuts she decided that she’d continue to be unpredictable in the game in order to not be a “goat” and that’s when she happened upon the next hidden idol to be found in the game! Knowing that she’d be gone a long time, when she returned to camp she pretended that she was feeling sick. While her acting job wasn’t that good, I have to give her props for being so aware of her spot in the game and knowing exactly what she’d have to do to improve her position.

8:10 p.m. – For the next immunity challenge Jeff asked the players to spin a ball within a circular wooden trap while standing on a narrow beam. To make things very different, they also randomly drew themselves into two separate groups that would each produce their own immunity challenge winner and then each go to tribal council and separately vote someone out! Whhhhhhhhaaaaaaaaat?? In addition the player that lasts the longest wins reward for their group as well as the opportunity to be the second group to attend tribal council.

8:12 p.m. – The two two groups were: Elaine, Elizabeth, Aaron, Missy and Karishma on orange then Aaron, Dan, Dean, Lauren, Noura and Janet on purple. After just a few minutes, orange was down to just Missy and Elaine for immunity while purple had Dean, Janet and Noura still standing. Just before moving to the second section of the beam, Janet dropped and then right after moving up the beam Dean dropped meaning Noura won immunity for herself. And just like that she jumped off her beam in excitement, ultimately giving up the reward for the purple team! On the orange side Missy saved herself once from a fall, but then couldn’t keep control of her ball and lost it, leading to a first immunity win for Elaine and ultimately the reward for her group.

8:17 p.m. – After the challenge the winning group went back to camp first to enjoy their peanut butter and jelly reward, but the losing group was separated from them and headed back to the old Lairo camp for the rest of the time leading up to their tribal. That meant the entire group was divided and couldn’t confer with one another prior to their individual tribal councils!

8:23 p.m. – At the losing Lairo camp, Janet was the prime target for a group of people that were going to vote her out already anyway. But things weren’t so cut and dry for Noura who finally saw an opportunity to axe Aaron, a physical threat that was suddenly vulnerable because he didn’t win immunity. She put the plan in motion with the rest of the group (Janet, Dan, Dean and Lauren), but for Dean that plan didn’t work because with Aaron got he would be left as the physical target. He pitched to Dan that Janet should go instead of a social threat, but Janet had already gotten to Dan to work together going forward, putting Dan in the middle of this vote.

8:25 p.m. – At the other camp, Missy was ready to control the vote on her side of things “with her girls.” Her plan was to target Tommy in order to separate him from Lauren so that Lauren would be forced to work with them instead. Missy also sees Tommy as likable enough to win in the final tribal council, unlike Karishma who no one would vote for. She pitched this plan to both Elizabeth and Karishma, but Karishma was hesitant to work with or trust Missy because of how she’s been treating her at camp.

8:28 p.m. – Karishma decided to talk to Elaine about how Missy’s been treating her in the game and told her that Missy’s plan was to get rid of Tommy. Elaine was pissed that Missy wanted to make that move and also felt compassion toward Karishma for how people were treating her and so she went to Tommy with a plan to use Karishma in order to vote Missy out instead!

8:38 p.m. – Noura’s purple group was the first to attend tribal council with only the jury to watch as they debated who should go. Dan opened up tribal by saying that “fortunately” the groups were divided in a way that the two original targets were on different teams and could still be easily voted out. To Janet that meant her within this group, but everyone aside from Noura still felt the heat, especially Aaron who was dumb enough to point out the “opportunity” that was on the table for his loyalty and place in the group to be tested since he lacked the protection of the necklace for himself.

8:47 p.m. – At the voting block we saw Aaron vote for Janet and Janet vote for Aaron so the split looked like it would truly come down to Dan’s decision. When no one played a hidden idol, Jeff read the votes: Janet, Aaron, Aaron, Aaron, Aaron. So it looks like they all united against Aaron! Poor thing LOL.

8:48 p.m. – Aaron got to head straight over to the jury as the orange group headed in for their tribal, all shocked to find him there instead of Janet. Elizabeth and Missy played it up big time saying that Aaron was their “number one,” making it seem as though they were prepared to remain true to the original goal of getting Karishma out. Missy doubled down on that by playing up the tension between herself and Karishma all day at camp, supposedly lulling Tommy into a sense of security.

8:53 p.m. – Before the group headed to vote, Missy pointed out that last week two black people, herself and Aaron, had both won immunity and more or less scolded Jeff for having not addressed it publicly at tribal as something significant to have happened in a game where minorities are typically at a disadvantage late in the game. It was a fair thing to point out and Jeff appreciated that she did!

8:54 p.m. – Despite having a hidden idol on her, Karishma did not play it and so Jeff read the votes: Missy, Tommy, Tommy, Missy, Missy! Karishma stuck it to her! The power that that has. But before heading out, Missy told Elizabeth (during a hug) that she has to get Elaine out as soon as she can, and then Missy proceeded to make a loud scene about Elaine backstabbing her.

NEXT WEEK: With only 9 left and their two “targets” Janet and Karishma still in the game, an alliance is in shambles and a “goat army” forms leaving Lauren, Tommy and Dean desperate to stop it.

Here are the answers to Gold Derby’s contest questions for “Survivor” Season 39, Episode 10:

Who will be eliminated? Aaron Meredith and Missy Byrd

Who will win Immunity? Elaine Stott and Noura Salman