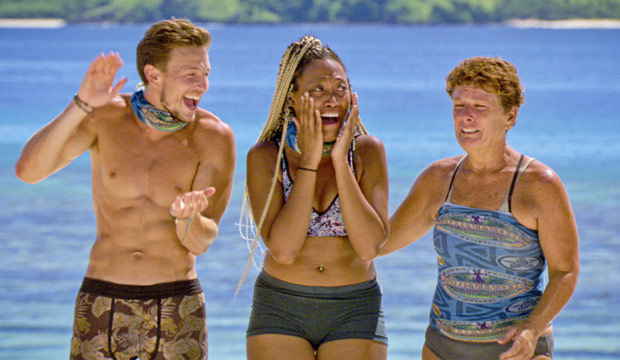 With the “Survivor: Island of the Idols” finale scheduled for December 18, only eight castaways remained in the running to win the $1 million prize. Three of them came from the original Lairo tribe (Dean Kowalski, Karishma Patel and Elaine Stott), while the other five were original Vokai members (Lauren Beck, Janet Carbin, Noura Salman, Tommy Sheehan and Dan Spilo). According to Gold Derby readers’ racetrack odds, Dan and Karishma were most in danger of being sent to the Ponderosa jury house in this week’s loved ones episode. Were they right?

Below, check out our minute-by-minute “Survivor: Island of the Idols” recap of Season 39, Episode 12, titled “A Very Simple Plan,” to find out what happened Wednesday, December 4 at 8/7c. Then be sure to sound off in the comments section about your favorite castaways on CBS’s reality TV show and who you think will ultimately join the “Survivor” winners list. Keep refreshing/reloading this live blog for the most recent updates.

SEEWhen is the ‘Survivor: Island of the Idols’ finale? Only 8 castaways remain to win Season 39 this December

7:59 p.m. – “Previously on ‘Survivor’!” In last week’s 11th episode, Lauren met Rob Mariano and Sandra Diaz-Twine at the Island of the Idols where she was tasked with predicting who’d win the immunity challenge. Her pick of Noura came true, so Lauren was awarded with a hidden immunity idol … which she later wasted at tribal council. Karishma also pulled out her own idol, which ended up saving her life in the game (at least temporarily). That resulted in a 1-1 tie between Elizabeth Beisel and Janet, and in the subsequent re-vote Elizabeth was eliminated.

8:08 p.m. – For the challenge Jeff tethered tribe members together in pairs and had them compete to get through an obstacle course and then land bean bags on platforms. Dan/Noura got off to an early lead, just ahead of Elaine/Dan and Tommy/Janet.  Bringing up the rear was the final pair, Lauren and Karishma. But Elaine/Dean were the first through the third stage of digging under a bar in the sand and reachd the bean bag toss ahead of everyone else. But then all three pairs caught up only to see Tommy/Janet hit their bean bag perfectly to win reward! As winners, Tommy and Janet got to pick two other players to join them on the loved one picnic–they picked Dan and Lauren.

8:19 p.m. – At the reward picnic, Janet, Tommy, Dan and Lauren all decided that Elaine should be their next target, but inside Lauren was considering all options, including how unlikely she thought it was that the other four would band together against them. At the same time, Noura was back at camp upset that she was left out of the reward after she sacrificed so much for them throughout the game. In her rant, Noura vocalized that she’d be willing to go against the other four with Karishma, Dean and Elaine. The four of them threw Lauren’s name out there as the best option because she’s the most threatening in front of the jury and because of her strong alliance with Tommy.

8:23 p.m. – The four knew that they had the perfect opportunity to go looking for an idol while the others were away at the picnic. In their search, Elaine was the lucky one to come across it. For them this was their chance at making their move against the alliance and, as Dean said, “creating their own luck.”

8:28 p.m. – The next day the final eight competed in an immunity challenge testing their balance and endurance where they must keep enough pressure on a ball above their head by holding it against a bowling pin while standing on a narrow block. Dean was the first one to drop followed by Tommy and then Noura after a big slip up. Janet was next to fall (literally) then Karishma and Dan, leaving just Elaine and Lauren. After showing a ton of pain and some tears running down her cheek it looked like Lauren’s body was going to give out, but Elaine dropped her ball out of nowhere and Lauren won!

8:38 p.m. – With immunity around Lauren’s neck, the plan became a split vote between Karishma and Elaine in case Karishma found another idol. Of course Noura was told the plan and so she was able to do what she had to do to counter it with her own plan. The split meant that the four non-rewarders could easily have majority over the others knowing that the other four were split to votes each. Because Lauren had immunity their backup plan was to eliminate Tommy, but Elaine was concerned that Noura wouldn’t stick to the plan.

8:42 p.m. – While Noura and Dean were talking, the other four started working through the possibility that Noura might be flipping. Funny enough, Dean was also worried about Noura after his talk with her, causing both sides to question her loyalty and her ability to not make crazy, unexpected moves as they all headed for tribal council.

8:49 p.m. – While tribal was happening, Dean whispered to Tommy that Noura, Elaine and Karishma were all targeting him. I suppose this was his way of circumventing relying on the unreliable Noura. Whispering obviously ensued with Tommy telling Dan and Noura pulling Tommy away saying that she was being framed by Dean. Eventually Noura just brought it out into the open in order to throw Dean under the bus in front of everyone. She also told everyone that Elaine has an idol (oh my god!) which made Elaine open up about how Noura told them they were planning on the split vote. As Karishma, Dean and Elaine all kept it cool I think it just made Noura look really bad.

NEXT WEEK: Noura’s head spinning at tribal council is followed by a dizzying challenge and then… Tommy turns on Lauren?!

Here are the answers to Gold Derby’s contest questions for “Survivor” Season 39, Episode 12:

Who will be eliminated? Karishma Patel

Who will win Reward? Tommy Sheehan and Janet Carbin

Who will win Immunity? Lauren Beck