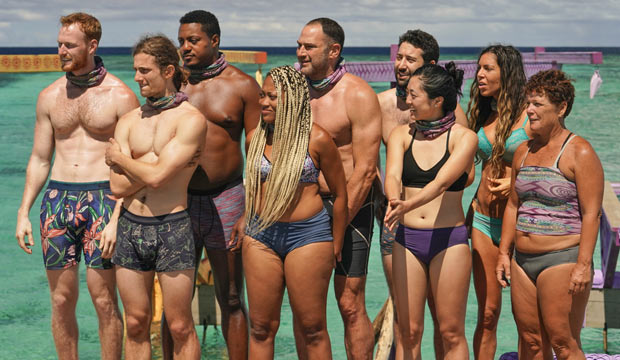 Heading into Wednesday’s third episode of “Survivor: Island of the Idols,” the Lairo and Vokai tribes were even at nine members apiece after the eliminations of Ronnie Bardah and Molly Byman, respectively. Both tribes also possessed one hidden immunity idol: Lairo’s Chelsea Walker found hers in a tree stump almost by accident and Vokai’s Kellee Kim won hers at the Island of the Idols. With the tribes being evenly matched in terms of physical strength and mental acuity, it was anyone’s guess who’d be sent to tribal council this week. So how’d it all play out?

Below, check out our minute-by-minute “Survivor: Island of the Idols” recap of Season 39, Episode 3, titled “Honesty Would Be Chill,” to find out what happened Wednesday, October 9 at 8/7c. Then be sure to sound off in the comments section about your favorite castaways on CBS’s reality TV show and who you think will ultimately join the “Survivor” winners list. Keep refreshing/reloading this live blog for the most recent updates.

8:00 p.m. – “Previously on ‘Survivor’!” In the second episode, Molly was blindsided by her Vokai tribe after the underdogs (namely Jason Linden, Noura Salman and Lauren Beck) became worried she was getting too powerful. Elsewhere in the episode, Kellee met Sandra Diaz-Twine and Rob Mariano at the Island of the Idols where she won an immunity idol by answering questions about Queen Sandra’s life. At the Lairo camp, Chelsea stumbled across a hidden idol and then later helped her tribe win the immunity challenge, which explains why she’s now Gold Derby’s front-runner to win.

8:01 p.m. – Jason was especially happy that Molly went home last week, mostly because it meant that he got to stay despite being on the chopping block himself. Jack however was concerned with being on the outs of that vote. Tommy Sheehan explained that it wasn’t a move against Jack or Jamal Shipman, but simply a move against Molly who the rest of the tribe saw as a threat. Tommy was desperate to do damage control with the boys and Jamal was comfortable falling into what he called a “wild card” role in the tribe, promising to “forgive, but not forget.”

8:02 p.m. – At the Lairo beach, the girls were happily engaging socially within their female alliance, but for Karishma Patel it was all an act. She knew she’d make the girls feel comfortable despite not wanting to go all the way with them. The guys were on the outside looking in and knew that they need to make sure that a gender split on their tribe didn’t get too tight. To help they touched based with Vince Moua to make sure that he’d side with them if it came to them. But Vince is no dummy and remembers that Aaron Meredith was ready to take him out already.

8:05 p.m. – Back at Vokai, Noura was still rubbing a majority of the tribe the wrong way and so Dan Spilo made it his mission to make sure that everyone would target her at the next vote. But Jamal was poised to “go rouge” already and saw this as an opportunity to find his own agency in the game, singling Dan out as an “icky” salesman type that he could make a move against. Once Jamal threw Dan’s name out there to Tommy and Janet Carbin they wondered if maybe Jamal was playing the game too hard and they should go for him instead!

8:08 p.m. – Meanwhile, Karishma injured herself with the machete, walking away after stabbing herself saying that she could see her bone and needed to go to the nurse. While she was a short distance away she took note that no one came to her to offer aid or comfort, severely tainting her opinion of them and causing her to vow to take each of them out of the game.

8:13 p.m. – This week Vince was whisked away to venture to Island of the Idols, striking fear in the heart of Elizabeth Beisel who had been there before and lied to the tribe about what happens there. Once Vince left everyone discussed the probability that he’d come back with an idol and that they’d need to flush it. In that discussion, Dean Kowalski dumbly optioned splitting the vote between Vince and…. well, that’s where he got hung up. Everyone was there and so no name could be put forward, but Karishma assumed that it’d be her.

8:15 p.m. – At Island of the Idols Vince was surprised to see Rob and Sandra, not knowing that they’d be there and was instantly overcome with emotion over meeting two of his idols. It was a touching moment for the all stars who were reminded of the impact they’ve had on other people’s lives. For his mission, Vince was asked to risk going to the other tribe’s camp to steal their fire and if he succeeds then he’ll win an idol and if he fails he’ll lose his vote. Bravely, Vince accepted the challenge and so Sandra and Rob taught him all they knew about sneaking around camps in order to go undetected.

8:20 p.m. – In the dark shroud of night Vince successfully navigated his way to the Vokai camp, but was unlucky enough to arrive at a point where one player woke everyone else up from a bad dream. Once they were back asleep he found that their tribe lets the fire go out at night so in order to prove that he actually made it to their camp he decided to shovel ash and coal from their fire pit. In that task he succeeded and was able to return to the Island with the proof he needed and earned his idol!

8:27 p.m. – Once again the immunity challenge was a team obstacle course, this time taking place primarily in the water and still finishing with a puzzle. In addition to earning safety from the vote, the winning tribe would win camp comforts in the form of pillows, blankets and a tarp. Janet and Elizabeth took the lead on either tribe as the solo swimmers tasked with untying a bouy under the water to retrieve a key. Elizabeth took the early lead once Janet struggled on the diving portion of her job.

8:29 p.m. – That put Lairo on the second part of the course, a five-person teeter totter balancing act, first. Despite falling behind early, Vokai managed to make up some time to reach their balance beam shortly after Lairo began theirs. Missy Byrd took the lead on Lairo’s balancing and was fairly successful in that role, but Kellee Kim was just as good if not better for Vokai.

8:32 p.m. – Nevertheless, Lairo reached the final stage (the puzzle) first, putting Karishma and Dean in the role of completing it. Unfortunately they weren’t very good at it and so Vokai caught up and eventually took the lead once Lauren Beck and Jamal found a rhythm on their puzzle. And once ahead Vokai didn’t let up, easily stealing immunity out from under Lairo’s feet!

8:39 p.m. – After losing immunity, the guys of Lairo were eager to formulate a plan for the vote. Even though they had tried to pull Vince in earlier tonight because he went to Island of the Idols he was now their prime choice for a split vote to flush his idol and hopefully still get Karishma out. When they went to the girls with the idea Missy was not on board with sacrificing Karishma and suggested Tom Laidlaw while Elizabeth and Elaine Stott preferred taking Vince out. When he spoke to Karishma about voting Tom out, Vince became frustrated with Karishma’s unwillingness to just go along with it. Chelsea Walker was still keen on keeping the girls alliance together and securing their power over the guys so she was okay with the Tom vote, but would go where everyone wanted to. Clearly the tribe was split in three directions and it was up in their air which way the chips would fall as they headed in to tribal council.

8:49 p.m. – At their second council as a tribe, Lairo cleared the air that physically they’re very strong and that they lost on the puzzle section, putting blame squarely on Karishma’s back. Feeling the pressure, Karishma made the case for herself physically, but also pointed out that she has a hard time relating to everyone personally while still vowing to be a strong ally. The girls reassured her that they’ve never seen her as so different from them that she isn’t one of them and asked her to believe in their loyalty. The group also discussed the idea of loyalty in relation to possible tribe swaps and how that would play into their vote.

8:54 p.m. – Before voting Karishma spoke privately in the ears of all the girls and Tom dismissed it as just as act to show that she’d scramble to save herself. After voting, Jeff asked if an idol would be played and not feeling the heat Vince decided to hold on to his so Jeff read the votes: Tom, Karishma, Karishma, Karishma, Vince, Vince, Vince, Vince and Vince sending him home with his idol in his pocket! An idol he could only use next time anyway! Very poor decision making there, but the tribe didn’t give any hint that they’d be going that way! And the girls maintain their grip on the tribe, but also now have breathing room to sacrifice Karishma if they need to…

NEXT WEEK: A bit of romance blooms between Chelsea and Dean at Lairo while the Vokai tribe must decide who among them goes to Island of the Idols. And it’s one of my favorite challenges: the blindfolded hide n seek! I hope for trips, falls, bumps and bruises galore.

SEESandra Diaz-Twine (‘Survivor’) remembers Rio, her precious Pomeranian who ‘passed while I was on Island of the Idols’

Here are the answers to Gold Derby’s contest questions for “Survivor” Season 39, Episode 3:

Who will be voted out at tribal council? Vince Moua

Who will win Reward? Vokai