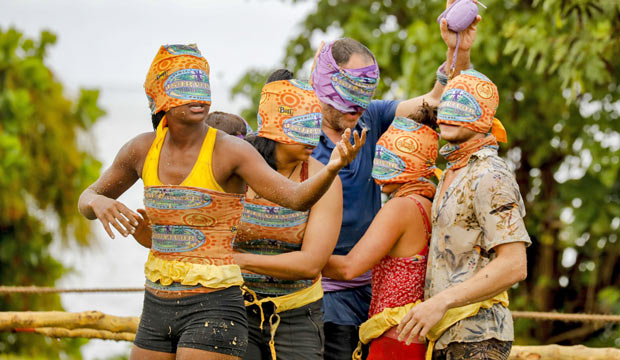 After three episodes of “Survivor: Island of the Idols,” the Lairo tribe was at a slight numbers disadvantage as they’d voted out two players (Ronnie Bardah and Vince Moua) compared to one (Molly Byman) for the Vokai tribe. Strong females dominated both camps, including the powerful Lairo fivesome (Missy Byrd, Elizabeth Beisel, Karishma Patel, Elaine Stott and Chelsea Walker) and the Vokai underdogs (Lauren Beck, Janet Carbin, Kellee Kim and Noura Salman). Did the women successfully vote out another guy in the fourth episode?

Below, check out our minute-by-minute “Survivor: Island of the Idols” recap of Season 39, Episode 4, titled “Plan Z,” to find out what happened Wednesday, October 16 at 8/7c. Then be sure to sound off in the comments section about your favorite castaways on CBS’s reality TV show and who you think will ultimately join the “Survivor” winners list. Keep refreshing/reloading this live blog for the most recent updates.

SEEVince Moua (‘Survivor’) exit interview after blindside: ‘I relied too much on the trust that I had in the women’

8:00 p.m. – “Previously on ‘Survivor’!” In the third episode, Vince visited the Island of the Idols and won a hidden immunity idol by completing Rob Mariano and Sandra Diaz-Twine‘s test. Unfortunately, the threat of an idol rubbed Vince’s Lairo tribe members the wrong way and they concocted a plan to vote him out at tribal council. Elsewhere in the episode, Jamal Shipman and Jack Nichting tried to save face at the Vokai camp after being blindsided over the Molly vote. Did they mend enough bonds to survive their next visit to tribal council? Let’s go!

8:01 p.m. – Following their tribal council the Lairo tribe checked in with Karishma and she said she’s okay, but with three votes cast against her she saw the writing on the wall: she’s expendable. Also feeling on the outs, Aaron Meredith took note that Karishma would be an easy target and so he set his sights elsewhere. He noticed that Dean Kowalski and Chelsea were cuddling at night and slowly becoming a “power couple” and so they became his new target.

8:02 p.m. – Knowing that she’s close with Chelsea (and the women’s alliance) and already having a bond with Aaron, she spoke with him about the power couple and asked Aaron straight up if he’d be willing to cut Dean loose. A plan like that keeps her in control and keeps her big alliance in tact! Smart. Smart. Smart.

8:03 p.m. – At Vokai Jamal was still concerned about his position at the bottom of the food chain. When everyone left camp together he found some time to go idol hunting and sure enough he found what he was looking for! Later they were greeted with an invitation to send one person to Island of the Idols. Because it had to be a unanimous decision, the tribe asked for volunteers and while everyone else declined it was Noura that was ready to go!

8:08 p.m. – Her conversation with Rob and Sandra at the Island centered around food. They shared watermelon with her, setting her up for a lesson in persuasion. The point was understanding what a person wants so that you know what to offer them in order to persuade them to trust you. For her game, Rob gave her a clue about their next immunity challenge in order to present her with the test: persuade your tribe to make you the caller and she’d get a “vote block” advantage. Noura immediately jumped at the chance, but that worried Rob and Sandra who already see her as all over the place and not the best person to be the caller. If she can’t convince her tribe to make her the caller then she loses her vote.

8:16 p.m. – When she returned to camp she told the tribe that her advantage was information about the next challenge. She also told them they have to unanimously agree to the role she plays by letting her choose her role. Everyone was very confused by the scenario she set up in order to make herself the caller, but I get the feeling that this wasn’t surprising territory considering their opinions of Noura already! One person who was happy to see Noura spiraling was Kellee who knew that her own secret about what’s at the Island was not going to come out. LOL!

8:24 p.m. – At the immunity challenge Jeff presented the challenge of a caller leading blindfolded members through a course in order to unlock puzzle pieces which the caller would then have to instruct blindfolded members to solve. Despite Vokai’s agreement to make Noura the caller they decided to have her sit out of the challenge, ruining her chances at the advantage and punishing her (unknowingly) with a vote loss at their next tribal council.

8:26 p.m. – With Noura out, Vokai selected Jason Linden as their caller while Lairo selected Elizabeth. Jason was very successful in his role, leading Vokai to all three of their keys at the same time Lairo only found one. Dean and Chelsea were lost on the Lairo course as Jason unlocked the puzzle pieces and began to lead Kellee through the puzzle. Throughout the challenge Jeff noted that Jason remained very calm, especially as Lairo caught up to them at the puzzle and almost beat them. But they kept it together and Vokai came through with what turned into a very close win!

8:38 p.m. – After their loss Elizabeth apologized for her role in the loss for Lairo. Feeling on the bottom, Karishma was expecting the entire tribe to vote against her despite knowing that there should be bigger targets. Tom Laidlaw didn’t even want a discussion about the vote and felt it should be Karishma with Dean backing him up on there and expecting the easy vote. Due to her close relationship with Dean Chelsea was also on board with that plan.

8:40 p.m. – Meanwhile Aaron was prepared to turn the vote against Dean, a player he thought was not contributing to challenges whatsoever. He presented that idea to Elizabeth and Missy. Elizabeth told them she was on board, but the concept bothered her because of her frustration with Karishma around camp and because she doesn’t see it as a good move for her game. Later Elizabeth spoke to Elaine about it and so the both of them began thinking that Aaron is being too sneaky in his willingness to vote out his own friend.

8:43 p.m. – When Elizabeth told Missy that Elaine wasn’t on board suddenly it seemed like Karishma and Dean were both off the table and so they needed a name that everyone could agree on. Missy threw out Chelsea’s name to Elaine which was a cause of concern to Elaine because of how easily she was willing to throw her under the bus. What is going on?!

8:50 p.m. – At tribal council Jeff wanted to know what the energy at camp is after two blindsides at their previous trips here. Karishma opened up about her continued struggle socializing at camp while Elaine was ready to spout about how all day everyone was scrambling (to which Sandra, from the spy shack, noted that Elaine never knows what’s going on). Eventually the conversation turned to a “plan Z” which Missy called “russian roulette.” When Karishma said it made her feel good, Missy was quick to put her in her place and point out that she’s just sitting there while everyone else is playing the game.

Here are the answers to Gold Derby’s contest questions for “Survivor” Season 39, Episode 4:

Who will be voted out at tribal council? Chelsea Walker