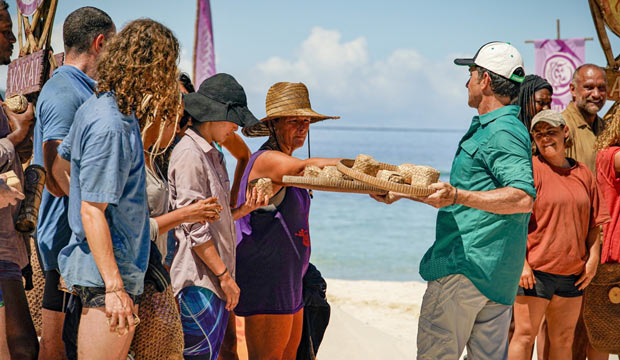 It’s that time again, “Survivor” fans — “Drop your buffs” time, that is. Just when we were starting to remember who was living at what camp, Jeff Probst came along and mixed things up with a tribe swap. Vokai went into Wednesday’s episode with a nine-to-seven numbers advantage over Lairo, meaning all of the success they had at the immunity challenges (winning three of four) was squandered after the tribe swap evened things out at eight members apiece. Which contestants took advantage of the switcheroo and whose torch was snuffed by Jeff because of it?

SEE‘Survivor’ 39 power rankings: A bad decision sends Missy Byrd to the bottom, shifts all power to Tommy Sheehan ahead of tribe swap

Below, check out our minute-by-minute “Survivor: Island of the Idols” recap of Season 39, Episode 5, titled “Don’t Bite the Hand That Feeds You,” to find out what happened Wednesday, October 23 at 8/7c. Then be sure to sound off in the comments section about your favorite castaways on CBS’s reality TV show and who you think will ultimately join the “Survivor” winners list. Keep refreshing/reloading this live blog for the most recent updates.

8:00 p.m. – “Previously on ‘Survivor’!” In the fourth episode, the Lairo tribe lost immunity (again) and came up with a plan to split up the Chelsea Walker/Dean Kowalski showmance. At first Dean was the target, but when Elaine Stott wasn’t on board with that decision, Missy Byrd shifted the focus to Chelsea instead. Over at the Island of the Idols, Noura Salman received a task from Sandra Diaz-Twine and Rob Mariano that required her to convince her fellow Vokai tribe mates to nominate her as the caller in the blindfold challenge. They declined, nominating Jason Linden instead, which meant Noura lost her vote at her next tribal council.

8:01 p.m. – After the blindside of Chelsea, Dean was out for blood to find out who “ordered the hit.” His main suspects were Elizabeth, Missy, Elaine and Aaron and so he set out to interrogate them. All of them played dumb and refused to tell him who came up with the plan except for Missy who basically said that the move did make sense. That left Dean feeling like he doesn’t know where he stands with Missy and Missy feeling like he should be thanking her for not getting him voted out instead. Fair points on both sides? Yes.

8:03 p.m. – There wasn’t much time to deal with that fall out though because Jeff was quickly ready to have the tribes “drop their buffs” and swap tribes. After the redraw of new buffs the tribes were: Elizabeth Beisel, Missy, Elaine, Aaron Meredith, Dan Spilo, Tommy Sheehan, Jason and Lauren Beck on new Vokai (4-4 split) and Dean, Karishma Patel, Tom Laidlaw, Noura, Kellee Kim, Jamal Shipman, Jack Nichting and Janet Carbin (5-3 split) on new Lairo.

8:06 p.m. – To test the new tribes’ ability to work together he offered a reward in the form of an Applebee’s lunch to the tribe could complete a slithering relay race over sand dunes (plus a puzzle at the end!) first. Dan and Elizabeth (tied together) got new Vokai off to a quick lead, but Tom and Janet struggled in the first leg for new Lairo, setting them far behind. Jason and Aaron received a huge lead to start the puzzle well-ahead of new Lairo. Once it became clear that Karishma would not get over her hill on her own Noura had to pull her to the finish with her own strength, but it was a great effort too late to stop new Vokai from easily winning!

8:15 p.m. – The reward picnic offered new Vokai the perfect opportunity to get to know each other from the previously opposing tribes. Tommy seemed like an immediate leader among the tribe, narrating the experience of arriving at the picnic and also delivering the first toast to their new group. Jason was ready to strategize, realizing that in order to break the 4-4 tie at a potential tribal they’d have to pull someone over. Elaine, from original Lairo, was much more concerned with making sure her original tribe mates remained strong and didn’t flip.

8:18 p.m. – Back at new Lairo camp, Karishma knew two things: 1) she just performed horribly at the challenge and 2) her old tribe wrote her name down at every tribal and so she was ready to flip. She decided to tell Kellee she’s willing to flip at the same time that Tom and Dean were off in the water bonding with the old Vokai members and throwing Karishma’s name under the bus. Meanwhile on the same tribe for the first time, Dean and Kellee bonded over the revelation that they have a mutual friend back home (Dean’s one time 6-year girlfriend went to business school with Kellee). That put Kellee in the middle of a tug-of-war between Karishma and Dean in terms of which original Lairo member she’d help fold into the old Vokai alliance.

8:23 p.m. – When the new Vokai tribe returned to camp Aaron watched as Elaine ingratiated herself to the new tribe by play wrestling with Missy. He took it as a sign of how he, too, would need to meet the other players on a personal level if he wants to stick around in the game. He made a bond with Tommy over their shared need of protection as likely physical targets once the merge hits. But in their 4-4 split situation they both knew that they’d need to convince the other to sacrifice someone from their side. Aaron went to Missy and offered the idea of “orange is dead” and she agreed, putting both in a position to be ready to flip once it became required of them.

8:28 p.m. – For the first immunity challenge as new tribes Jeff put the players in the water for a dive-and-shoot race. Once again Karishma was slow going, as was Noura, allowing the new Vokai tribe the opportunity to once again get a hold of an early lead. In his live commentary Jeff made it clear that Karishma was holding her tribe back (much to her chagrin) and that Vokai was running the course very smoothly with Missy and Tommy as star performers. Miraculously Dean was able to get Lairo back into the game with some expert shooting, but it wasn’t good enough to match Tommy’s skill. So once again Vokai brought the win home, sending Lairo back to tribal council though with a new set of players. Jeff also noted that no one would be venturing to the Island of the Idols tonight.

8:39 p.m. – Facing an elimination, Dean apologized to his tribe for not coming through with the shooting as a Division I college basketball player. He was prepared for his name to be on the chopping block considering old Vokai had the majority 5-3. The other option was Karishma, especially to Jamal who wanted to keep Dean and Tom around for the strength. Karisham pitched her case that old Lairo is dead to her and that she’s willing to vote out Tom or Dean depending on how the old Vokai members wanted to go.

8:42 p.m. – Kellee confessed to Dean that she wants to work with and trust him, but that she felt that way so quickly worried her. She met with Noura and Janet to discuss their best option. Noura held on to her secret that due to her loss at Island of the Idols last week this week she can’t actually vote at tribal. Luckily for her they had strong enough numbers as a tribe for it to not really matter, but as they journeyed to tribal it was unclear which was her tribe was going to sway.

8:49 p.m. – At tribal Jeff opened with a discussion of the numbers and how on paper it’d seem that old Vokai has an easier road ahead with solid numbers. Tom was ready to admit that there really wasn’t any cracks in that group and so he and the other old Lairo members were prepared to see their names on the parchment. The topic of Tom’s age came up and Janet defended him saying that his personality is less about his age (as hers isn’t about age) and just a reflection of who he is. Janet also wanted to clarify with Dean that she felt he didn’t make any attempt to get to know her despite him finding time to meet with the male members one-on-one.

8:55 p.m. – After ballots were cast Jeff asked if anyone wanted to play a hidden idol, but the answer was no (both Jamal and Kellee have one). The votes came through: Tom, Karishma, Karishma, Tom, Tom, Tom, Tom. So Karishma lives to see another day and it’d seem Tom’s straight-shooter personality may have made him too big of a threat to re-join his old tribe at the merge.

Here are the answers to Gold Derby’s contest questions for “Survivor” Season 39, Episode 5:

NEXT WEEK: Will Vokai finally lose immunity and “go to rocks” in a 4-4 tie at tribal council?

Who will be voted out at tribal council? Tom Laidlaw

Who will win Reward? Vokai