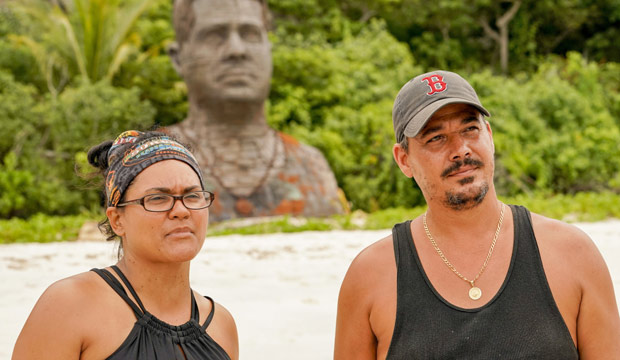 With the merge on the horizon, the Vokai and Lairo camps were dead even at seven members a piece heading into Wednesday’s seventh episode of “Survivor: Island of the Idols.” The Vokai tribe had a four-three split with Elizabeth Beisel, Missy Byrd, Aaron Meredith and Elaine Stott on one side and Lauren Beck, Tommy Sheehan and Dan Spilo on the other. Meanwhile, the Lairo tribe was flirting with a girls alliance (Janet Carbin, Kellee Kim, Karishma Patel and Noura Salman) vs. the three guys (Dean Kowalski, Jack Nichting and Jamal Shipman). So which castaway ended up getting their torch snuffed by host Jeff Probst?

Below, check out our minute-by-minute “Survivor: Island of the Idols” recap of Season 39, Episode 7, titled “I Was Born at Night, But Not Last Night,” to find out what happened Wednesday, November 6 at 8/7c. Then be sure to sound off in the comments section about your favorite castaways on CBS’s reality TV show and who you think will ultimately join the “Survivor” winners list. Keep refreshing/reloading this live blog for the most recent updates.

8:00 p.m. – “Previously on ‘Survivor’!” In the sixth episode, Elaine ended up saving the day for her group when she was awarded a block-a-vote advantage by Sandra Diaz-Twine and Rob Mariano that allowed her to gain the upper hand at tribal council. She decided to block Jason Linden‘s vote, then promptly voted him out. “As a fan it’s a crazy way to go out,” Jason declared moments after his blindside. Elsewhere in the episode, Aaron momentarily considered flipping on his old tribal alliance (but didn’t), while Jack and Jamal bonded over a discussion about privilege.

8:01 p.m. – Old Vokai was devastated following the elimination of Jason knowing that they are down in the numbers now. Lauren was especially emotional about the result, but Missy did her best to assure her that they’d save her because she’s their connection to the rest of the old Vokai girls (now at Lairo) that Missy wants to join with at the merge.

8:03 p.m. – After a night of horrible rainfall, Lairo had to build a new fire the next morning. Jamal struggled to start a fire for a long time and when Kellee made an attempt at it his controlling and demanding side showed itself, much to her annoyance. Later he butt heads with Noura as well over rice portions.  The events of the day set Noura off to the point of trying to build a female alliance with Janet and Karishma, but Janet urged her to wait until merge to put something like that in motion.

8:06 p.m. – Janet was this week’s Island of the Idols visitor, but once she saw Rob and Sandra there all her worrying over it ceased, but more tears flowed. Janet’s lesson at the Island was about “calculated risk,” as Rob puts it: “to not make moves without knowing why you’re doing them.” Rob presented her with the opportunity to play a game in order to win a “safety without power” advantage that would send her home from a tribal council, but without the power to voice. Janet became the first player to reject the game and not play because she figured it would put too big of a target on her back even if she won that advantage. After she left, Rob and Sandra both agreed that she made the right decision and thought she displayed the qualities of a potential winner.

8:15 p.m. – At Vokai, Lauren was still aware that she was competing against Tommy and Dan at this point to avoid being the target of the old Lairo members. She is close with Tommy so together they made a pact to make sure that Dan would be their target instead of attempting to break the two of them up. Between the two of them, Lauren definitely showed herself to be the stronger player considering Tommy broke down into tears out of fear that he’d be voted out.

8:18 p.m. – When Tommy and Lauren started making their pitches, Missy was well aware that they were simply trying to hide how close they are. So Missy set a plan in motion to get rid of Tommy so that’d leave Lauren with nowhere else to turn but toward the female alliance.

8:22 p.m. – It was another rainy day at the immunity challenge that was mostly a giant wooden block puzzle. In order to collect the puzzle pieces the tribes had to toss coconuts into a basket first. In this task Lairo struggled big time, allowing for Tommy, Missy and Elizabeth to release their puzzle pieces much quicker. Lauren took the lead on the puzzle for Vokai, barking orders at her tribemates, but after they mismatched a few pieces the door was open for Lairo to sneak in a win. But with only one piece left to get in, Lairo didn’t manage to get the win and so Vokai earned their immunity!

8:33 p.m. – At Lairo the initial plan was to unanimously vote out Dean because he’s seen as too sneaky to leave in the game. Jamal spearheaded that discussion around camp and told the camera that he feels safest at this vote, even without needing his hidden idol. But in order to keep Dean calm, Jamal and Nick both told him that the vote would be Noura instead.

8:35 p.m. – Kellee’s idol from the Island expires at this tribal and because she didn’t want it to go to waste she devised a plan to save her friend Dean. For her new plan to work she’d need to trust him to use her idol in order to take out one of her own targets: Jack or Jamal. She sees Jack as someone with a lot of connections with other players in the game and Jamal as someone that won’t go to the end with her and who she struggles to connect with.

8:37 p.m. – Shortly before tribal, Kellee put a really risky plan into action. She told Dean that he’s the target and that everyone is voting him out. He was shocked, but then relieved when Kellee offered her idol to him in order to pull off their crazy move. We didn’t get to see it, but she also discussed potentially telling Noura that Dean might play an idol and send her home so she should vote Jack or Jamal instead as a backup plan. We’ll have to see how it plays out!

8:44 p.m. – At tribal Jeff opened up straight away with pointing out how strong old Vokai looks in terms of numbers. Noura pointed her commentary directly at Dean who she said barely makes eye contact with her. Dean countered by saying that Noura was already putting Jamal’s name out there which set off a discussion between Noura and Jamal about how much they trust each other.

8:47 p.m. – When Jeff asked Jamal how safe he feels, he admitted to being scared of an all female alliance which Kellee batted down immediately. Kellee took offense to the idea of it, but Jamal challenged back by asking Noura if it ever crossed her mind and she admitted that it had (and we know it has!). Is he going to be convinced to use his idol?

8:52 p.m. – After the players cast their individual ballots, Jeff asked if anyone wanted to play a hidden idol, to which Dean played Kellee’s for himself and then Jamal played his for…… Noura! Jeff read the votes: Dean, Dean, Dean, Dean, Dean, Jack, Jack. So Jamal read that wrong, but also didn’t go home himself (thankfully!).

NEXT WEEK: It’s meeeeeerge and everyone is scrambling to fit into the new tribe.

Here are the answers to Gold Derby’s contest questions for “Survivor” Season 39, Episode 7:

Who will be voted out at tribal council? Jack Nichting