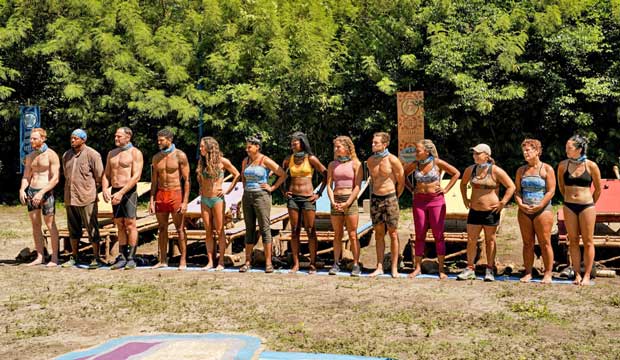 Has there ever been a “Survivor” season that was so consumed by real-world social issues? Here we all thought that super players Sandra Diaz-Twine and Rob Mariano‘s mentoring would be the draw of the show’s 39th season. But the insertion of the Queen and Boston Rob into “Island of the Idols” with their rather obvious lessons on gameplay hasn’t made that big of an impact so far.

What has stood out is some of the behavioral and emotional baggage that the contestants brought with them to Fiji and openly discussed with their tribemates. Consider Karishma Patal‘s sharing her feelings about her traditional arranged marriage. Then there was a respectful verbal discussion about how Jamal Shipman felt when Jack Nichting called his buff a “durag,” which led to a civil talk about white male privilege. Last week, Kellee Kim called out Jamal when he admitted to being “fearful of an all-girls alliance,” declaring his comments to be sexist. After all, as she noted, men’s alliances are rarely treated that way and are seen more like business as usual.

But if Season 39 will be remembered for anything, it might the jam-packed two-part, merge episode in which the issues that drive the #MeToo movement were discussed in light of some of the female players’ discomfort with Dan Spilo’s touchy-feely habits. Kellee discussed her concerns with him to his face early in the game, saying she did not like his or anyone’s hands on her.  But his behavior continued, as shown by him kissing her hair after she came back from the Island of the Idols and in a scene of him trying to touch her hair again. But she did not use her feelings determine her decisions in the game. The producers even got into the act, asking whether Kellee wanted them to intervene on her behalf. We would learn at the end of the show that they met with players and discussed personal boundaries while issuing a warning to Dan.

However, Missy Byrd, Elizabeth Beisel and Lauren Beck decided to weaponize the accusations about Dan’s behavior and convince Janet, who liked Dan but thought she was doing the right thing by protecting the younger female players by voting him out. Instead, it was Kellee who got the boot, leaving with two idols in her pocket no less. The three women then decided to exploit such a serious accusation as strategy against Janet Carbin, who joined four others to vote against Dan to relieve them of their so-called concerns. Meanwhile, the trio above doubled-down on their deception by voting WITH Dan.

SEE Is Queen Sandra right that Janet could make a splash as the oldest female ‘Survivor’ winner ever? [POLL]

Consider that Janet, a 59-year-old lifeguard who saves people from dying for a living, should never have had her moral code preyed upon in that way, not to mention their besmirching Dan’s reputation on national TV. Not that Dan himself is any sort of paragon exactly. But Janet was the one who was being played, not him. Here are her words on the subject: “I feel anything that has to do with sexual uncomfortability has nowhere, no place in a joking environment, a game environment. It’s its own entity. It’s a very powerful thing. Lives can be destroyed.”

The island gods, however, saw fit to make Janet’s day by allowing her to find an immunity idol that would use at the second tribal council. Meanwhile, Jamal rudely snatched a dangling note while walking with Karishma, who spied it first. That turned out to be some bad juju for him since he didn’t finish reading the note that would go on to say that what he found was “too good to be true” and he would lose his vote in the next tribal council. He ended up going to the Island of the Idols, where Rob gave him a piece of parchment and a pencil to design his own sabotage advantage that he could give to another player. He passed it to Dean Kowalski, since it was his birthday, but apparently Dean was both older and wiser since he became immediately suspicious of his gift.

How did you feel about one of the most socially conscious and controversial episodes of “Survivor” ever?  Did the women step out of bounds by lying to Janet about their concerns? Was Jamal wrong to grab that note after Karishma pointed it out?  And maybe Kellee committed the greatest sin by not playing one of her two idols. And did you even noticed that the merged tribe is now called Lumuwaku? Take the poll below on how you feel about Janet being deceived and further express yourself in the comments section below.