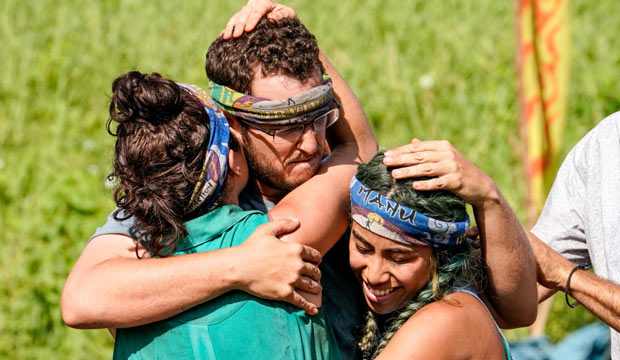 The audience has spoken. A whopping 44% of “Survivor” fans who voted in our recent poll say that they’re “so happy” Rick Devens returned from the Edge of Extinction in last week’s merge episode. Rick won the obstacle course challenge against fellow voted-out players Reem Daly, Keith Sowell, Chris Underwood, Aubry Bracco and Wendy Diaz, which earned him the right to return to the game and join the other 12 merged castaways. While Rick earned the most votes in our poll, Aubry came in second place with 26% saying that they wanted her to return instead.

“I’m back, baby!” Rick exclaimed in his first confessional after returning to the game. “Before Edge of Extinction, the game in a lot of ways was getting the best of me. But if I can win my way back into the game, what the hell’s out here that’s gonna scare me? I can win these people over. I can win challenges. I’m a whole new man thanks to the Edge of Extinction.”

Rick may need to start winning challenges, and fast, because he’s already a target at the new merged beach. Last week he received votes from Aurora McCreary and Joe Anglim after Kelley Wentworth and Lauren O’Connell hatched a plan to send the Georgia newscaster right back to the deserted island. However, immunity winner Julie Rosenberg thought it would be an unsympathetic move to re-eliminate Rick so soon, so she sided with her Kama alliance (Victoria Baamonde, Julia Carter, Ron Clark, Eric Hafemann and Gavin Whitson) to send home Joe instead.

Aubry openly wept when she thought that her time in the game was over. “‘Survivor’ has just given me so much in my life,” said the former “Kaoh Rong” and “Game Changers” competitor. “I owe so much to this game and I’m grateful, but I got played. I got played hard.” But then host Jeff Probst surprised Aubry and the other outcasts by telling them they’d have yet another chance to return to the game at a later date. In addition, anyone who agrees to remain on Extinction Island will become jury members.

Here’s how all of the Edge of Extinction competitors fared in our poll that asked fans who they wanted to return to the game: