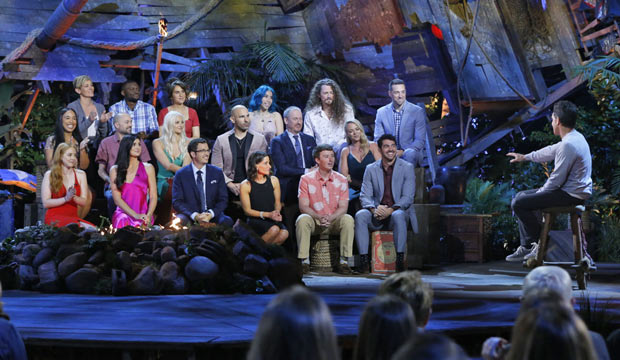 In recent years the “Survivor” reunion show has slowly been snuffed out before our eyes, with last week’s live “Edge of Extinction” chatfest running for less than 30 minutes. That’s a far cry from the early years of the reality TV show when finale night would conclude with a full one-hour reunion following the two-hour final episode. According to our recent poll, viewers are nearly unanimous that they want “Survivor” to bring back the hour-long reunion show, with 89% voting yes and 11% voting no. Do you agree or disagree with those poll results? Sound off down in the comments section.

SEE‘Survivor’ finale video recap: Winner Chris Underwood made ‘one of the best moves in all of reality TV’ [WATCH]

The post-finale reunion used to be a place for the players to dish their favorite moments from the season, air their grievances, and get emotional about their time on the island with host Jeff Probst. With the reunion show getting shorter and shorter over the years, that means many “Survivor” castaways get all gussied up in fancy dresses or expensive suits and don’t end up saying anything.

For example, in the “Edge of Extinction” reunion show Jeff only had time to talk to a handful of them. He spoke with Chris Underwood about winning the game and whether he and Rick Devens would remain friends after Chris ousted him, and he also checked in with past castaways David Wright, Kelley Wentworth and Aubry Bracco. The fourth returnee, Joe Anglim, got a special one-on-one interview earlier in the program.

But there wasn’t any time to check in with several other contestants, which irritated fans who’ve been waiting for answers on some dangling threads from Season 38. For example: Did Keith Sowell and Wendy Diaz have any regrets about raising the white mast? How did Julie Rosenberg and Lauren O’Connell feel about playing Rick’s fake idols? How much did Aubry actually use the practice advantage she found on Extinction Island? And how many of the jurors would have voted for Rick to win had he made it to the Final 3?

Also during the truncated reunion show, fan favorite Rick got a special prize of $100,000 from pop star Sia, an admitted “Survivor” superfan. “Thank you Sia! We’ll be swinging from the chandelier for sure,” Rick told Gold Derby on the red carpet. After the credits rolled, Sia awarded $15,000 to Joe for charity for cutting his hair — but why oh why wasn’t this shown during the reunion? Talk about a missed opportunity for a fun viral moment!