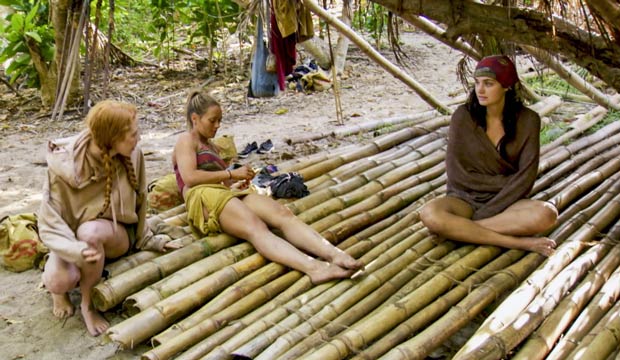 With only two episodes to go, “Survivor: Edge of Extinction” is down to the Final 6 (or 7 if we’re counting on another return). With jury-favorite-apparent Rick Devens as the universal target to eliminate next, other Top 6ers Lauren O’Connell, Victoria Baamonde, Gavin Whitson, Aurora McCreary and Julie Rosenberg head in to the final stretch of the game with only a small target on their own backs. That leaves the door wide open for anyone–including Rick, if he can win some immunities–to carve their path to the win, but it will take a tight and small alliance to make that happen.

That’s why this week we’ve got new allies Lauren and Victoria at the top of our power rankings. Both women have showed a tremendous amount of restraint throughout the season, slyly playing their cards at exactly the right moment. Lauren, for instance, has resisted playing her hidden idol even when she knew she was vulnerable. And Victoria has been calculated about when to make moves against her allies, managing to remain under the radar at the same time. Together they present a front that will not only be hard to break, but would be a formidable pair to go against at a final tribal council.

So how does their on-again-off-again partner Gavin fit into that? Does Rick have any chance at avoiding elimination? And can Aurora and/or Julie earn the respect it will take to win? Below we attempt to answer these questions and provide our take on which of the voted out players could return to the game and potentially win. Disagree with how we’ve ranked them? Let us know how off we are in the comments!

If there’s one thing we can say for certain about this season it’s that their alliances/voting blocks/whatever you want to call them are never set in stone. But we are down to the final six and I’m inclined to put a lot of stock in the brand new alliance that Lauren and Victoria made this week. The two have not been playing “together” at all this season, but they finally realized that in order to get to the end they’ll need each other and so they devised a plan to ensure that they’d decide who went home if/when Rick played an idol. And their plan is exactly what happened. We didn’t see how, but they also managed to reel in Gavin, who agreed to use Aurora’s extra vote and placed both on his own semi-ally, Ron Clark.

Now, I don’t necessarily think this will be our final three (I’d love it if it was!), but my guess is that two of them are part of it. With Rick being the target of everyone, none of them have a target on their own backs which should help them get through at least one more vote. Of the three, Lauren still has an idol to use at one of the next two tribal councils, Victoria has been so low key that no one has voted for her yet and Gavin seems like the most genuinely liked on a personal level.

SEERon Clark (‘Survivor’ 38) exit interview: ‘I took my eye off the prize’ and ‘I feel bad about Devens’

What sets these three apart from the top three is that each of them is either well-respected by the jury and a huge target because of it (Rick) or has been seen as a goat and/or not liked by the jury for almost the entire game (Aurora and Julie). While both situations are vastly different, they are similar in that they present a massive hurdle for the player to overcome in order to win. For Rick specifically he’ll have to either find another idol or win every immunity from here on out in order to make the final. For Aurora and Julie, their best hope is that they squeeze into the finals as the “I can easily beat them” option.

All that being said, I can see a scenario where Aurora becomes a competitive finalist–she’s won two individual immunity challenges and has been singled out as a general threat in all or most of them. She’s also been decidedly not shy at tribal council which means she’ll be just as vocal at a FTC. Honestly, the worst thing you can do in front of the jury is not say enough about why you deserve the win–I don’t think Aurora will have that problem. Julie on the other hand has appeared emotional, shaky and indecisive in front of the jury and that will not go over well in her final pleas.

Of all the Extinction Islanders, I’d say Chris, Aubry and David have received the most compelling edits that suggest to me they’re in contention to return to the game. Chris went out very early in the game, but with a redemption arc set in motion–remember, he was very concerned with how badly he wanted to play a perfect game and how not doing so was an opportunity for personal growth.

Then there’s Aubry and David who have generally received strong edits throughout the season, but also showed the most willpower and drive to return to the game during their time on Extinction. David’s relationship with Rick was played up big time all season long so seeing them reunited at the end of the game wouldn’t be a surprise–and it’d give Rick a last chance of hope to actually make it to the end (for real, Rick’s winner edit is strong, I just don’t see how he actually gets there). Aubry had a slow start to the game, struggled to make any real allies and hasn’t been as ever-present as some of the other players, but when it comes to the players at Extinction, she is more determined than even Joe and Kelley appear so that says something. Right?