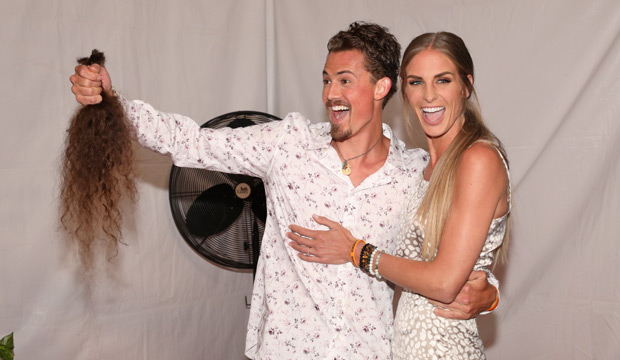 What would make him lose what just might be the source of his incredible performances during challenges during three editions of CBS’ popular reality show? None other that Aussie pop chanteuse Sia, an apparent “Survivor” super fan, dared him to lose that gorgeous mop for charity and offering him $15,000 to do so.

It all started early in the three-hour show when host Jeff Probst kidded Joe, saying that maybe the reason he hadn’t won once after competing on three seasons was his follicles. That caused the “Chandelier” singer to tweet: “”Hey @janglim21 if you cut your hair off and donate it to a children’s cancer wig making charity I’ll give you 15k,” moments after Probst made the suggestion. While the host failed to convince him, Sia’s suggestion was far more persuasive.

She also bestowed $100,000 to Rick Devens, who was deemed the most likely Sole Survivor until Chris Underwood came back from Extinction Island and returned to the game again. She also gave $15,000 to another contestant, Aurora McCreary.

“It all just kind of like, snowballed. I was like, ‘Yeah, sure. Let’s make it happen. Let’s roll with it.’ I got to talk to her, I got to talk to everybody. Like, let’s just do it for charity and make some kids’ day,” he told “Entertainment Tonight” while his fiance and fellow “Survivor” contestant Sierra Dawn Thomas — admired her beau’s new look.

“I love it! I love Joe for many reasons. One of them is his hair,” she said. “I love it. He could be bald and I would still love him. But I think he looks very handsome. It’s going to take a little bit of time to get used to.”

Joe is in good company when it comes to Sia’s bestowing monetary gifts on “Survivor” players. During the “Kaoh Rong” season, she was touched by Tai Trang and his love for animals — which included him saving a chickens so the other contestants wouldn’t turn them into dinner. She showed up at at the season finale reunion show to tell  the big-hearted Trang that she was giving him $50,000, as well as $50,000 to the animal charity of his choice.

She also gave a financial  bonus of of $14,000 to “Ghost Island” contestant Donathan Hurley. Sia was moved by his struggles while growing up gay in Kentucky and having to take care of his sick grandmother. He ended up taking a cruise and put the leftover money towards buying a house from himself, his mom and his grandmother.

Most recently, she gifted “Survivor: David vs. Goliath’s” Davie Rickenbacker with $14,000 because she was impressed with his loyalty to keeping his faith and was sorry he didn’t win.