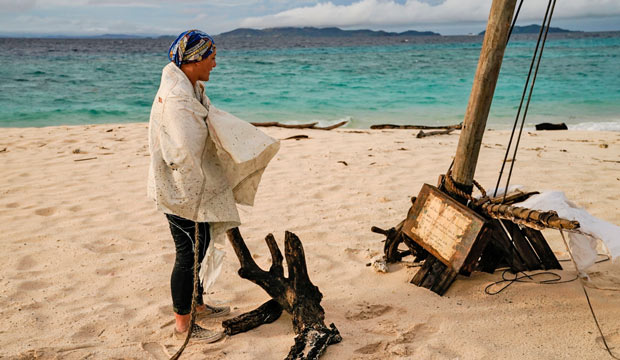 Like most long-running reality TV shows, twist and turns in the format regularly happen. On “Survivor,” which has been on CBS since 2000, the behind-the-scene masterminds often like to isolate players away from the other castaways and test their mettle. They have used the concept of “island” twists four times. The current 38th season introduces probably the most stressful option yet —  “Extinction Island.” The show is intentionally hiding what is expected of players who land there. But that got us thinking  about how, at least so far, you think it compares to the other “Survivor’s” other three islands — Exile, Redemption and Ghost. Below, refresh your memories about what each island involved and then vote in our poll for your favorite.

Exile Island: The original island twist first popped up as a throwaway concept in the 10th season, “Survivor: Palau.” Probst told the castaways that the first person to drop out of the individual immunity challenge would be punished by having to spend the night alone on a separate island. Janu Tornell became the first-ever member of Exile Island and ended up loving her night away from her contentious tribe members. She quit the game at the next tribal council.

“Survivor” producers loved the Exile Island concept so much that they brought it back as its own season-long concept in “Panama” (Season 12) and then again as side-twists in all of the following installments: “Cook Islands” (Season 13), “Fiji” (Season 14), “Micronesia” (Season 16), “Gabon” (Season 17), “Tocantins” (Season 18) and “San Juan del Sur” (Season 29).

SEE‘Survivor’ video recap: We ‘feel bad’ for Reem on Extinction Island because ‘3 days is a long time to be alone’ [WATCH]

Redemption Island:  There was the island that gave eliminated castaways the chance to redeem themselves and re-enter the game by competing in duels against future castoffs. The winner of each duel would remain on Redemption Island and wait for their next opponent, while the loser would toss their buff into a fire and exit the game for good.

SEE 4 things we HATED about the ‘Survivor’ 38 premiere: Keith’s lack of preparation, ageism against Reem …

Ghost Island: Introduced in Season 36, when 20 castaways were tasked to right the wrongs committed by former players in the past. Jeff Probst described the concept as “the graveyard for bad ‘Survivor decisions.’” The set was intentionally spooky. Those who were sent to the island walked through shrines that paid tribute to immunity idols and necklaces from previous seasons, including a secluded shelter where all the torch snuffers used over the years dangled from above. There was a lit fire wok and modest food rations available.

Inhabitants would get a chance to remove the curse on these immunity items that were misplayed previously.  They included Ozzy Lusth’s fake immunity idol from “Fans vs. Favorites” that took the form of a stick covered by a cloth. There also were JT’s unplayed idol from “ Game Changers” and James Clement’s two unused idols from “Survivor: China.”

Winners of the reward challenge were tasked to unanimously pick one player from the losing tribe to go to the island. If they couldn’t agree, the losing tribe drew colored rocks. Once a player arrived, they were instructed to smash a series of urns, allowing them to participate in a game of chance for an advantage in the game – all used on previous seasons. If they lost the game of chance, they would lose their vote at their next Tribal Council.

SEE What do YOU think Keith’s ‘Survivor’ decision will be: Visit Edge of Extinction or leave the game? [POLL]

Extinction Island: Introduced on the current 38th season, Extinction Island is the sneakiest banishment yet, as it is kept a secret from 18 castaways until they are voted out at Tribal Council. After they leave the council area, they happen upon a detour that offers them a choice: either quit or head off into the unknown on a boat. They end up at a rather dismal camp by the water that has meager amenities, although a flint and a sharp instrument is provided and coconuts are in reach . Lying about are the remains of shipwrecked vessels, including one that allows the player to hoist a tattered white flag to summon a boat if they wish to ditch the option of possibly returning to the game.

As a distressed Reem Daly (see photo above) — the first person to be eliminated — learned, there aren’t many clues provided about what happens next. The only info is on a sign that informs them they are on Extinction Island. “You will have to work hard for everything, ” it warns. “When fear or loneliness sets in find the resolve to overcome.”  That’s it. She might be joined soon by her fellow Manu tribe mate Keith Howell — or not. We will likely learn his fate on the third episode airing on Wednesday.

Probst has said he wanted the show to “get a little deeper psychologically, a little deeper spiritually. Let’s see how far people want to go. Is there a possibility of the spiritual death and rebirth that you seek in life, where you realize something deeper about yourself? That’s where this idea was born.” Furthermore, he adds that there is “no certainty that you will get back in the game.” Already, it has caused in-the-dark Reem much concernation as she broke down and cried.  As if blindsides, secret alliances and sneaky strategists weren’t enough to worry about.